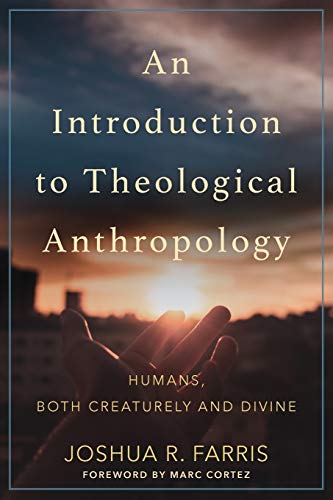 An Introduction to Theological Anthropology: Humans, Both Creaturely and Divine

Joshua Farris has provided in this book an introductory text that takes readers on a survey tour through the world of theological anthropology. In it, Farris weaves together patristics, major figures of Reformed theology, and a heavy dose of contemporary analytic theology. The book is structured in a very user-friendly loci approach, which allows readers to consult specific topics as well as traverse the whole of the text from start to finish.

After an introductory chapter in which he lays out theological prolegomena for his project, Farris works through discrete topics in the next ten chapters. These topics move from the questions of personal and narrative identity (ch. 1), human origins, evolution, and the source of the soul (ch. 2), the nature of the imago Dei (ch. 3), the freedom and responsibility of human agency (ch. 4), the character and transmission of original sin (ch. 5), Christological anthropology (ch. 6), work, race and disability (ch. 7), gender and sexuality (ch. 8), life after death in the intermediate state and the resurrection (ch. 9), the human teleology of beatific vision and theosis (ch. 10), and then finally a brief conclusion and an appendix that surveys recent anthropological literature.

Throughout Farris does not simply present a range of positions without himself committing to theological conclusions. He stakes claims. Yet, he does so only after fair presentation of the strengths and weaknesses of varying alternatives. The book is thus more than just an overview of a menu of anthropological options.

Several overarching anthropological theses undergird all of the chapters and give the book distinct theological hue and cohesion. The most salient of these are anthropological substance dualism (i.e., that humans are composed of body and soul), the soul as the locus of personal identity, and the telos of humanity in beatific vision and deification.

Farris also dismisses the imputation of the guilt of Adam’s sin on the basis of his federal headship as a “legal fiction” (p. 142). In its place he proffers an Augustinian realism “that is metaphysically grounded in something actual” (p. 147). This raises a set of questions that Farris leaves unaddressed. Does this logic also apply to the doctrine of justification as it has been classically understood in the Reformed tradition? Does the imputation of our guilt to Jesus and the imputation of his righteousness to us entail a legal fiction as Rome long has maintained? Does justification also need to be metaphysically grounded in something actual like an infused righteousness as Rome has long maintained? These are troubling questions for any confessionally Reformed theologian. And they cannot said to be out of the bounds of Farris’s project in the book as he does actually venture into discussions of atonement and justification in chapter 6. In light of this, a significant lacuna in the book is a distinct chapter giving a thematic treatment of the covenantal arrangement God establishes with Adam, a covenantal arrangement that Farris assumes in multiple places in the text.

Another troubling question which lies beneath the surface of the whole work is a matter of theological prolegomena. Farris holds that “the Scriptures are underdetermined and require the information from other theological authorities taken up in a systematic presentation of the issues” (p. 120). Alongside of Scripture, these “normative sources” are understood to be “tradition (or ‘Holy Tradition’), reason, and experience” (p. 8). Farris’s theological method then appears to be opposed to the classic Reformed affirmation of Scripture as the sole principium of theology and instead to offer a model of theological method which affirms multiple theological principia alongside of Scripture. Put more succinctly he seems implicitly to deny the sufficiency and perspicuity of Scripture.

Farris also advances the thesis that “metaphysically Christ carves out a new humanity” (p. 171). What is meant by this is that through an elevation of the soul (p. 281) the “frailties and epistemic weaknesses” that humans possess “even apart from sin” (p. 171) are overcome so that humanity in Christ can see God and participate in the divine nature. Farris’s Christological anthropology and account of the beatific vision thus appears strikingly similar to a Roman Catholic supernaturalism in which the nature of man, even in his unfallen state, needs to be elevated through a super-added gift of grace in order to participate in beatific vision.

Farris’s account of deification is a corollary of this as well. The hypostatic union of the divine and human natures of Jesus in the incarnation seems to carry redemptive and deifying freight even when considered apart from Christ’s atonement for sin (p. 192). Farris frames the incarnation in such a way that the human nature of Christ is deified (p. 281). He is sensitive to how his formulations might impinge upon Chalcedonian boundaries and insists that he does not transgress them (p. 279). But it is difficult to see how on such a formulation Christ’s natures remain unconfused and unchanged.

Farris’s titular theme that humanity is divine as well as human hinges upon the goal that man should ultimately reside in heaven with God (p. 283). Heaven itself as a realm is “understood to be the life-infusing and suffusing power of this world” (p. 254). This formulation and others in the book seem to conflate the created, eschatological realm of heaven with God himself as the one whom heaven and the highest heaven cannot contain (1 Kgs 8:27). It presents an almost Platonic understanding of heaven as a realm of forms and ideas which is metaphysical in character rather than eschatological and redemptive-historical in character. Without this subtle conflation of the realm of heaven with God, it is hard to see how humanity’s heavenly destiny in any way makes it “divine” given that heaven itself, if it is something other than God, is created and not divine.

There are many outstanding features of the book alongside of some of its more salient problematic positions. Throughout the book Farris offers penetrating criticisms of the varieties of monistic materialism that occupy the contemporary theological landscape. The chapter covering the gendered and sexual nature of humans breaks fresh ground. Farris advances a very insightful, thetic account of how “the sexual identity of male and female” is “essential to the human story, which is predicated on biological difference as well as similarity for the ‘productive’ function of bringing about a ‘dynasty’ through the covenants” (p. 212). He also provides a very fair treatment of the complex and nettlesome issues involved in the contrasting positions of traducianism and creationism on the origin of the soul (pp. 67–77) and their relation to questions about original sin (pp. 149–59).

Overall, the book is an especially useful introductory text to acquaint one with the current state of issues in theological anthropology. It offers many criticisms, analyses, and conclusions which, even if one disagrees with them, are still formidable and thought-provoking contributions to both the hoary debates of theological anthropology and fresher ones that have emerged more recently.