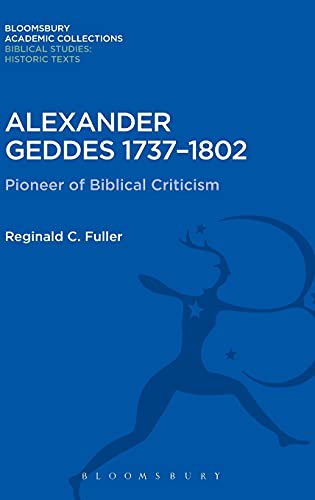 An eighteenth-century Scottish Roman Catholic priest seems an unlikely pioneer of Old Testament criticism, but Alexander Geddes was influenced by the French Enlightenment and German biblical criticism rather than by Scotland or the Roman Catholic Church. He was, in fact, one of the few British biblical scholars at that time who took any serious notice of German scholarship, and earned the reward of being himself taken seriously by the great German critics of the time. But Dr Fuller has not convinced me that Geddes’ contribution to the development of biblical criticism was a particularly important one. Certainly he was outspokenly in favour of the principle on which biblical criticism is founded: that the biblical documents are to be studied like any other ancient literature. But his historical criticism seems to have consisted largely in a rationalistic approach to the miraculous and an application of the notion of myth which rather lacked the sophistication of its contemporary German advocates. In his literary criticism of the Pentateuch, he helped to develop the Fragment Hypothesis in opposition to the beginnings of the Documentary Hypothesis, but, insofar as Fuller reports his arguments, they seem again to be rationalistic historical, rather than literary, ones.

Geddes is an illustration of the extent to which eighteenth-century Enlightenment rationalism contributed to the origins of biblical criticism (‘reason, reason only, is the ultimate and only sure motive of credibility, the only solid pillar of faith’), but whereas in Germany this was integrated into a real concern with its theological consequences, Geddes seems frustratingly silent about the grounds for what Fuller calls his ‘professed allegiance to the person of his Saviour’, let alone his allegiance to the Roman Catholic Church. His rationalistic interpretation of Old Testament history was supposed to remove obstacles to belief, but he failed to explain how his principles could also establish belief.

Geddes’ rather peculiar position in the world of biblical scholarship probably gave him an occasional advantage of perspective. Thus he quite correctly observed how the Reformation in its later stages inhibited the development of textual criticism, while fully recognizing also the Counter-Reformation’s apologetic misuse of textual criticism (pp. 32–33). I was intrigued by his notion of a small circle of enlightened biblical scholars whose principles are the same regardless of denomination. He would have been at home in the modern world of essentially non-confessional biblical scholarship.

Dr Fuller, himself a Roman Catholic biblical scholar, wrote this work as his Cambridge Ph.D. thesis, but it has waited fifteen years to be published, apparently owing to the economics of publishing. The Almond Press has not only overcome these difficulties, but has produced the work in an attractive form. It is based on solid research and makes an interesting contribution to the history of biblical scholarship.

Professor of New Testament Studies at the University of St. Andrews