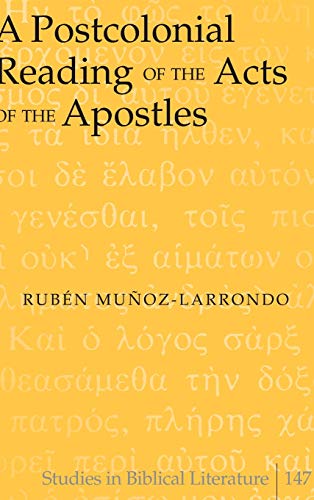 A Postcolonial Reading of the Acts of the Apostles

This book slightly reworks the author’s doctoral dissertation at Vanderbilt University under the supervision of Professor Fernando Segovia. The aim of the work is primarily hermeneutical, and that in two ways. First, it attempts to shed light on the Acts of the Apostles by subjecting it to an alternative reading. Second, this alternative reading is used to interpret the interpreters of Acts and the biases that inform their interpretations of the biblical text. The particular reading that Muñoz-Larrondo employs is Postcolonial criticism.

The first chapter of the book, therefore, explains what Postcolonial criticism is. I can only summarize the author’s summary given limitations of space. Muñoz-Larrondo wisely indicates that there is not such a thing as a dominant definition of Postcolonial criticism. Rather, it is better to view it as “a way of reading, a criticism, an optic that intends to decolonize the theories and practices of biblical interpretation and theology from the centers of the West, compared and contrasted with the readings of base communities or of social-groups, and ‘from my place’” (p. 7). Further, he speaks of Postcolonial strategies that “embrace the premise that many dimensions exist in the text that have been overlooked if not ignored by the traditional historical critical approaches” (p. 37). To that end Postcolonial criticism engages a number of categories that can, positively, fill gaps in more dominant methods (read historical-critical) and, negatively, “disturb” and “interrogate” the imperial presuppositions carried by the more dominant methods. Muñoz-Larrondo develops five categories: hybridity, diaspora-alterity, mimicry/mockery, identity, and race in imperialism and colonialism (pp. 9–24). The author suggests that these categories help to unmask the imperialistic presuppositions that dominate the representation of the Other on the part of European interpreters and thereby help to read the text of Acts in a more inclusive manner. He completes the chapter by providing brief descriptions of ancient “imperialistic” strategies. In particular, he attempts to place Acts in the context of ancient labeling of barbarism as done by the Greeks, Romans, and Jews. As a community that inhabits the margins of ancient society, the readers of Acts must learn to legitimize themselves in the crucible of these three cultures.

Chapter two serves as the entry to the exegesis of Acts. Here Muñoz-Larrondo examines Acts 12:20–24, which describes the death of Herod Agrippa I. Again, the analysis has a double foci: criticism of previous interpretations of the passage that have been blinded by European-centric presuppositions (i.e., historical-critical method) and retrieval of a meaning less tainted by invalid presuppositions. The author views Acts 12:20–24 as not having received enough attention (despite a full-length monograph by Wesley Allen) and as playing “a key role in Acts” (despite the fact that it is only five verses). His argument is the following: “Luke uses Herod’s death as a type-scene to represent the destiny of the Empire and of anyone who shows allegiance to those who call themselves divine and rulers of this world” (p. 45). The Acts 12 passage is thus important in itself; but it is also a nudge to the readers of Acts to be on the alert for similar dynamics in the rest of the narrative. But we have said that Muñoz-Larrondo’s aim is not just an interpretation of the text of Acts but also a questioning of previous readings of Acts, so the next chapter tackles this issue.

Chapter three examines Roman imperial worship and previous interpretations of it. The subject, as Muñoz-Larrondo admits, is immensely complex. Again, I can only summarize his conclusions, which build primarily on the work of Barbara Burrell. The imperial cult was not just adulation on the part of the populace but a sincere religious act; the emperor was truly viewed as divine; it was broad enough to affect just about every dweller of the Roman Empire. This is vital for Muñoz-Larrondo’s thesis, for he will argue that this is the sort of emperor worship that Acts is decrying “between the lines” of its narrative.

Chapter four turns to the portrayal in the book of Acts of the institutions of Judaism. Here Muñoz-Larrondo examines a number of passages in Acts that show the Christians (to be viewed as a “manifestation” of first century Judaism) interacting with the institutions of Judaism, primarily the Sanhedrin. There is some intriguing discussion of Paul’s relationship with the leaders of the Jerusalem church, where Muñoz-Larrondo pits Paul against the leaders.

The final chapter, in my opinion the most persuasive, debunks the idea that Roman authorities are presented in toto as benevolent. Rather, the tendency of Acts’ presentation is to show the authorities as false, partial, and in some ways dominated by the power of Satan.

To summarize (pp. 230–35): Muñoz-Larrondo argues that by using Postcolonial criticism it is possible to see Luke presenting “a hidden transcript of resistance” against the claims of the Roman Empire, particularly when it seeks to appropriate for itself divine attributes. Luke does this by his narration of Herod Agrippa’s punishment, which, for the readers of Acts, demonstrates that a similar fate awaits those who seek to take on divine prerogatives. Using this same Postcolonial reading helps in examining the reception of Acts’ scholarship in a European-centered mode of exegesis. It helps in uncovering the biases of such exegesis, thereby clarifying some crucial aspects of the narrative of Acts.

Muñoz-Larrondo has succeeded in demonstrating that Acts is, in some ways, not a politically innocent text. It surely does not call for revolution; but there are sufficient clues—for those with eyes to see—that indicate that when imperial powers attempt to usurp the authority that alone is God’s by repression of the Jesus movement, judgment and destruction awaits them. What Muñoz-Larrondo does not succeed in doing is showing that a Postcolonial reading significantly clarifies this picture. In other words, although the method is helpful, it is not as powerful in uncovering new dimensions of Acts in the way the author implies in the first chapter. There are other problems with this work that could be developed (e.g., lack of interaction with primary sources, lack of interaction with secondary works in foreign languages [surely a doctoral dissertation must include research in languages such as French and German, which is essentially non-existent in this work], exaggeration on the importance of Acts 12:20–24), but I focus on two that I am afraid may jeopardize the credibility of this work as a whole.

First, as I mentioned earlier, one of the most significant chapters in the book is that on imperial worship. Muñoz-Larrondo is aware of the complexities of this matter in both classical and NT scholarship. He opts for what I would call the maximalist view (see above). But to debunk the other view, he engages in a crass ad hominem argument. Those scholars who support the minimalist view do so because they “try to safeguard their reputations as postmodern, free-thinkers, and want to appear unbiased regarding such claims of divinity. Though they find enough evidence . . . in the end they refrain from reaching a conclusion and leave the case ambivalent. It seems to me that they do not want to be the laughing-stock of the rest of their peers” (p. 115). This is simply breathtaking. That as scholars we do not want to be ridiculed and that this sometimes distorts our scholarship, I do not doubt (we are humans); but to make a sweeping generalization that those who do not agree with Muñoz-Larrondo’s view of the nature of imperial worship do so because of deep-seated psychological insecurities is not scholarship.

The other significant problem that I find in this work is its conclusion vis-à-vis other scholarship on Acts. Here is what Muñoz-Larrondo says about his contribution in using Postcolonial criticism: “Such a reading is not better or worse than others, but it is a reading from my particular location” (p. 230, my italics). I thought the author had labored on more than 235 pages because he wanted to persuade me that his reading was an improvement on previous European-centered (and therefore biased) appraisals of Acts. At the end, what matters is that this is his reading. How one can engage in critical dialogue with this posture I do not know.