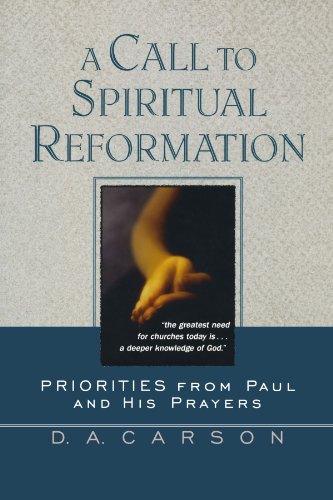 A Call to Spiritual Reformation: Priorities from Paul and His Prayers

This book is something of a chimera, a beast of divers parts. It is substantially a series of expository studies of the prayers found in Paul’s letters. But interspersed are chapters dealing with prayer as a practical spiritual theme; and running through the whole work is the leitmotiv of D.A. Carson’s indictment of the church in the West, which, for all its apparent success in matters of organization and self-promotion, has failed in its chief calling, the knowledge of God, and needs more than anything else to embrace a ‘spiritual reformation’.

The expository studies focus on six passages in 1 and 2 Thessalonians, Colossians, Philippians and Ephesians, in which Paul articulates his prayers for the believers whom he addresses. On the basis of these Carson delineates what he believes to be the essential elements of Paul’s practice of prayer: a ‘spiritual framework’ of thanksgiving and hope, a guiding vision of God’s purposes, a passionate concern for others, a willingness to go beyond self-seeking to a knowledge of God, a pursuit of excellence in the Lord, and a recognition of God’s sovereignty. A final study examines a passage from Romans 15 which culminates not in Paul’s prayer for the Romans but in his request that they should pray for his ministry.

Four of the 12 chapters follow a different format. Chapter 1 lists a number of ‘Lessons from the School of Prayer’, solid practical advice culled from the teaching and example of ‘senior saints’—worthy stuff but a rather prosaic opening to a call to spiritual reformation. A similar excursus later examines a number of popular excuses for not praying. In a chapter on ‘Praying for Others’ Carson has gathered together numerous passages that further illustrate the remarkable degree to which Paul in his prayers expressed a concern for the well-being of the churches—though one might observe, rather cynically, that we should hardly expect him to record at length how he prayed for himself in letters intended to address the needs of others. Finally, there is a well-constructed and apposite study of the relation between prayer and the sovereignty of God, seeking to answer the question, What is the point of praying if God has already ordained all things?.

Despite the title, the idea of spiritual reformation emerges almost incidentally in this book and might easily be missed in a superficial reading. The force of Carson’s concern appears chiefly in his trenchant and perceptive, though not particularly coherent, diagnosis of the church’s spiritual sickness. He brings to light, here and there, through anecdote and diatribe, a range of moral and spiritual failures: ministers and teachers whose goal is professional self-fulfilment rather than prayerful self-giving; ‘morose and whining Christians’ too preoccupied with their own needs to ‘give thanks in all circumstances’; the shallowness and banality of what passes for spirituality in many churches; our persistent refusal to ‘inquire of the Lord’ before taking action. Yet in all this Carson loses sight neither of his own shortcomings nor of the special pressures and temptations faced by church leaders; and it is one virtue at least of the hybrid nature of this book that the call to a deeper knowledge of God is firmly rooted both in Scripture and in practice.

What most distinguishes this attempt to redress the church’s priorities is that it approaches the matter from an uncommon direction. The belief that it is the Word of God that should reform our praying is no mere dogmatic formality, nor is Scripture invoked simply for purposes of illustration: the various principles, judgments and assurances that Carson sets out emerge consistently from a thorough and confident exposition of the model prayers of Paul’s letters. And there is more to recommend this book. It is pervaded by a sense of personal urgency, of impatience, even frustration, which in places inspires a heightened and compelling rhetoric. It does not pursue any narrowly denominational aims: it is a message that believers from all traditions should hear. Especial attention—both critical and sympathetic—is given to the needs and responsibilities of those in ministry. Questions for review and reflection are appended to each chapter.

One is only left wondering whether the book really lives up to its title. On the one hand, the reader may find himself by the end somewhat disoriented, having been tugged back and forth between polemic, exposition and practical advice. On the other, the theme of ‘spiritual reformation’ is too thinly and spasmodically treated to develop the sort of visionary momentum that it deserves. There is much to be learnt about prayer here, but I fear the bugle call may be too indistinct—and who will get ready for battle?