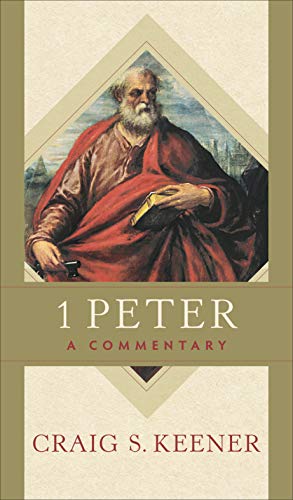 In this recent commentary on 1 Peter, Craig Keener has produced a significant volume that will prove to be a helpful resource for the serious student of Scripture. As with many of the works that flow from Keener’s pen, this commentary is heavily footnoted and showcases his vast knowledge of the primary sources. Indeed, the main contribution of the commentary lies in the extensive comparisons that it draws between various Petrine themes and similar motifs in ancient Jewish and Greco-Roman literature. As a result, those who will benefit most from this volume are theological students and scholars. The editorial decisions to include a fresh translation of 1 Peter by Keener (pp. xxxvii–xliv) and to include Greek only in transliteration suggest an attempt to broaden the commentary’s appeal, but the effort feels out of step alongside dozens of references to Philo, Pliny, Cicero, and even Duke University’s papyrological database.

The imbalanced nature of the commentary is confirmed in the preface (pp. xi–xii). Keener acknowledges that this book is not designed to replace standard treatments of 1 Peter (e.g., John H. Elliott, 1 Peter, AB [New York: Doubleday, 2000]; Paul J. Achtemeier, 1 Peter Hermeneia [Minneapolis: Fortress, 1996]; Peter H. Davids, The First Epistle of Peter, NICNT [Grand Rapids: Eerdmans, 1990]). He is likewise candid about the fact that, due to time constraints, he interacted very little with recent secondary literature. Taking note of these admissions is vital if readers are to avoid approaching this commentary with improper expectations. Keener goes on to explain that this volume originated out of research conducted for a seminar presentation on the ancient context of 1 Peter. Thus, while it would not be entirely accurate to call it a backgrounds commentary, the main body of the volume (pp. 42–413) evokes a similar “feel.” For example, the commentary includes twenty-five excursuses on topics such as “Slavery in the Early Empire” and “Marriage Expectations in Greco-Roman Antiquity.” In total, these excursuses span no less than 141 pp. As an aside, careful attention to the footnotes shows that most of the excursuses either reprint or condense material from Keener’s other writings. One presumes this decision was also due to the aforementioned time constraints.

Despite these caveats, there is much in this volume that can be appreciated. First, the commentary begins by addressing a number of standard introductory matters (pp. 1–41), centrally the contentious issues of authorship and date. Keener advances a “somewhat contrarian opinion” (p. 8) in modern NT scholarship. He argues that the Apostle Peter actually had a hand in the authorship of 1 Peter while still alive (perhaps as part of a collaborative authorial community). Keener maintains, “While Peter’s authority stands behind the letter … others are likely primarily responsible for the quality of Greek and perhaps even input on some of the Diaspora allusions” (p. 12). Because of the ambiguity of internal evidence regarding Petrine authorship (i.e., “what constitutes genuinely ‘Petrine’ style?”), Keener places much weight on external attestation. The tradition of the early church unequivocally attributed 1 Peter to Peter, and Keener provides extensive documentation of possible literary citations and allusions to 1 Peter in the writings of early Christianity (pp. 16–25).

Relatedly, Keener turns his attention to whether Silvanus is described as Peter’s scribe (and thus perhaps a co-author) or simply as Peter’s courier in 1 Peter 5:12. He devotes a ten-page excursus to the issue (pp. 393–402), carefully weighing the arguments for each position before turning to fresh data gleaned from the Duke University papyrological database. Keener finds that the lexical evidence points to both readings as legitimate possibilities, concluding that “scholars who have stated conclusively that 1 Pet. 5:12 refers only to the courier, not to an agent of composition, have worked from too narrow a sample of evidence” (p. 401).

Finally, as mentioned above, the true value of this work is found in Keener’s careful comparative work. The footnotes will repay the diligent reader, and a ninety-four page bibliography (pp. 415–509) and extensive indexes (pp. 510–608) are an added bonus. Written with remarkably clear prose, this volume does an admirable job of setting 1 Peter in its ancient context. As such, it will no doubt be a valuable resource for years to come.