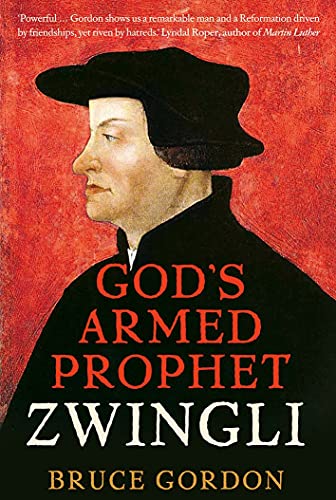 Since the early Victorian period, evangelical Protestant readers have given the lion’s share of their interest in Reformation-era figures to two men: Martin Luther (1486–1546) and John Calvin (1509–1564). There was no necessity requiring this focus; in the preceding age of Enlightenment neither had been well-remembered. But the Romantic-era decision having been made that Luther and Calvin (and not their contemporaries) would be highlighted as representatives of the age of Reformation, there followed the flood of translated treatises, commentaries, and expositions which are still with us (frequently as reprints of Victorian editions). Not so for their sixteenth century contemporaries, who were largely left in oblivion. Today, the very abundance of this Luther-Calvin material from the 1800s appears to buttress the impression of their original dominance. In fact, the prevalence of this literature largely reflects choices made for us by the Victorians. Accordingly, Zwingli (the subject of this biography) had no English-language biographer before 1901 and his major writings were not made available in modern English until that author, S. M. Jackson, produced three translated volumes of Zwingli’s writings (1912–1929). Other such Reformation “greats” have waited still longer.

Bruce Gordon, who has already established his reputation in this field with writings on the Swiss Reformation (2002), John Calvin (2009), and Calvin’s Institutes (2016), provides the reader with many good reasons to re-assess this “conventional wisdom” about who were the influencers and who were the influenced in the sixteenth century. Zwingli married his Anna before Luther married Katie (1524 versus 1525) (p. 69). The complete Bible, freshly translated at Zurich, was available in Swiss German by 1530; Luther’s complete German Bible did not appear until 1534 (p. 240). If we know that John Calvin prefaced his original Institutes of 1536 with an appeal to France’s monarch, Francis I, we ought also to know that this strategy had been relied upon by Zwingli, in his dedication of his Commentary on True and False Religion to Francis in the spring of 1525 (pp. 148–49). The ultimately counter-productive placards (poster-like assaults on the Roman mass) which infuriated the authorities of Paris and other French cities in the autumn of 1534 (giving Calvin reason to flee to Basel), were the product of a Swiss Protestantism which had already been fueled by Zwingli. The very canton of Bern with whose assistance Geneva threw off the jurisdiction of its Catholic prince-bishop in 1535, was a Bern which had earlier been influenced by Zwingli and Zurich to embrace the Reformation. The neglect of Zwingli has thus been unjustified.

For such reasons as these, Gordon makes a powerful case for naming Zwingli as “the originator of what became the Reformed tradition” (pp. 92, 275). No first-generation Protestant reformer stood closer to Erasmus; they only finally parted company over Zwingli’s insistence on the perspicuity of Scripture (pp. 81–82). Zwingli was an accomplished musician as well as composer of music (p. 110). We can trace to him the simplification of the church year with an honored place kept only for the Lord’s Day, Christmas, and Easter (p. 135). He displaced the medieval Catholic notion that once-yearly participation in Holy Communion was sufficient; at Zurich there would now be four observances of the Lord’s Supper per year, in which worshippers would be expected to participate—rather than observe (p. 139). Zwingli was the first Reformer to give extensive thought to the parallels between the Passover meal and the Supper, between OT circumcision and Christian baptism (pp. 140, 170). The 120 priests of Zurich at the time of Reform were gradually re-oriented to a sturdier biblical faith by the ongoing weekday “prophezei,” in which sound biblical interpretation was modeled (pp. 142–45). Both Geneva and the English Puritans took pages from this Zurich manual and made this practice their own. But there must be more to it than this, or we would have long been united in our praises of Zwingli.

Therefore, Gordon must be frank in acknowledging that though musically-gifted, Zwingli eschewed reliance on music, religious art and church furnishing. He favored the “piety of the mind” (p. 36); that was what was supremely important. These views once inculcated moved the Zurich council to ordain the removal of all such distractions (including organs) from the city’s churches; this was not left to mobs. Having rallied those who would eventually lean to Anabaptism by his early learned advancing of reform, he would later reverse himself and consent to their exile or execution (p. 271). Supremely, Zwingli—dying on the battlefield in 1531—was the man who was “a casualty of his own willingness to use force to religious ends” (p. 232). He was also no friend of ecumenical Protestant reform, if that cooperation meant conniving at theological unity with Luther and his followers. His angular writings and behavior in the lead-up to the important Marburg Colloquy of 1529 (in which he was supported by Oecolampadius of Basel) ensured not only the failure of that attempt at Protestant unity, but also brought nearer the political isolation of Zurich in the face of the Swiss Catholic hostility which led to that city’s defeat and Zwingli’s death.

In sum, Gordon has made a very effective case that we have seriously underestimated the impact of Zwingli and the Zurich Reformation. While the power of its example was felt most in Basel, St. Gallen, Schaffhausen, and Bern (which eventually followed Zurich in siding with Reform), we need to be aware that this movement also made waves farther afield in the south German lands of Constance, Augsburg and Regensburg. It was also Zwingli’s teaching (in print) that encouraged the friends of reform in France in the 1520s, when Lefevre d’Etaples was at his most active (p. 151). The reviewer looked for but did not find corresponding attention paid to the legacy of Zwingli and Zurich manifested in the English Reformation. The writings of Zwingli and his Basel counterpart, Oecolampadius, on the Lord’s Supper were being taken note of by Catholic authorities in England in the 1520s. Early Protestants such as John Hooper (1495–1554) had read Zwingli in England; he subsequently dwelt in Zurich for a time before returning home under Edward VI. The same was true of early Scottish reformer, George Wishart (1513–1546), who found refuge in Zurich soon after Zwingli’s death; he later mentored John Knox. The era of Marian persecution (1553–1558) exposed a larger swath of English Protestants to Zurich under Heinrich Bullinger, Zwingli’s successor. The distinctive notes of the Puritans were not simply home-grown.

The reader should not neglect Gordon’s timely concluding chapter, “Legacies,” and concluding “Afterword” in which he reflects on how the character and career of Zwingli have been variously appraised since his death, right up to and including the 2019 feature film produced by Stephen Haupt (p. 296). By reflecting on Gordon’s distillation of past interpretations of Zwingli, evangelical Protestant readers will be reminded of the fact that we, also, have our favored perspectives on the leading characters of that age. If anything, we are likely to have absorbed guarded views of Zwingli—views attributable to Calvin, who we are predisposed to echo.

Zwingli: God’s Armed Prophet is both a timely and an important book. The perspective provided by Gordon, the historian, is very sure-footed. At the same time, those concerned to better understand the development of Zwingli’s theology will still benefit by W. Peter Stephen’s The Theology of Zwingli (Oxford: Oxford University Press, 1986).