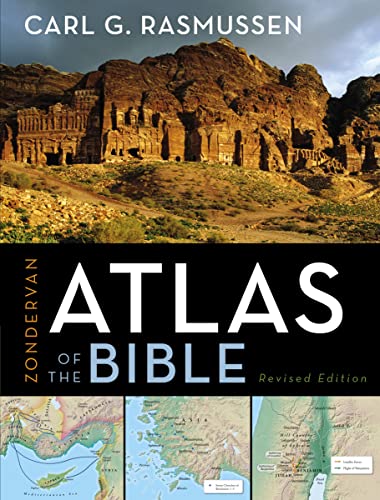 Zondervan Atlas of the Bible

This carefully and thoroughly revised edition of Carl Rasmussen’s Zondervan Atlas of the Bible (ZAB) is a visual and literary feast. Map lovers will undoubtedly pour over this volume, but it will also win converts from among the realm of those unmotivated by maps alone. Rasmussen treats biblical geography in an accessible and engaging format, and for these reasons his atlas will certainly become the gold standard of biblical atlases and how they choose to present map, image, and text. Rasmussen’s enthusiasm for geography is contagious, which bodes well in a genre that is often plagued by incomprehensible two-dimensional maps with confusing webs of lines and arrows that are “illuminated” with dry prose. Completely new maps produced by International Mapping comprise the major addition to Rasmussen’s earlier Medallion award-winning atlas (1989). The prospects for the success of this atlas should put to rest any high-browed sentiment that only kids benefit from images when reading their Bibles.

ZAB contains two major sections, a “geographical” and a “historical” section, as well as subject and Scripture indexes, a historical timeline, a thorough geographical dictionary/index, and an accompanying poster of NT Jerusalem (which doubles as a shameless advertisement for the atlas). The “geographical” section introduces readers briefly to the broad terrain of the Middle East and its major geographical regions (Egypt, Syria and Lebanon, Mesopotamia), but also probes the geography of Israel and Jordan in more depth. Maps survey the topography, climate, travel routes, geology, and terrain of Israel and Jordan. I appreciate the distinct emphasis of each map and the carefully chosen corresponding photographs. For instance, when discussing the climate in Jerusalem, Rasmussen includes a photograph of the city during and after a “hamsin,” a dry and scorching wind that wearies humans, animals, and flowers, but helps ripen grains (p. 31).

The “historical” section comprises the bulk of the atlas and spans about 180 pages. The geographical history begins with an overview of the pre-Patriarchal period, where Rasmussen discusses the Garden of Eden, the Table of Nations and Early Bronze Mesopotamia, Egypt, and Southern Levant. Rasmussen admits that theories about the location of the Garden of Eden’s location are speculative. For example, major rivers like the Tigris and Euphrates flowed from it (high altitude) yet it was allegedly warm enough for no clothes. Not all readers will agree with the possibility of a real geographical location, though Rasmussen rightly notes the use of some familiar ancient Near Eastern geography in Gen 2–3’s description of Eden. Maps of Early Bronze cities often have accompanying images of the impressive Early Bronze archaeological sites, many of which Rasmussen himself photographed. The next historical sections deal with the patriarchal and then Exodus/conquest periods of Israel’s history. Rasmussen spends a good amount of time discussing the role of the Egyptian Empire in Canaan during this period, explaining such events as the expulsion of the Canaanite Hyksos from Egypt in the MBII period. He is careful to note when cities or regions are unknown, offering various theories when possibilities exist, but leaving unknowns where appropriate. In his section on Israel’s settlement (pp. 113–30), Rasmussen details not only the borders of each tribe, but also their strategic importance. For example, I was pleased to see that Rasmussen notes the importance of the Benjamin plateau for trade, military, and east-west and north-south traffic. Despite its small size, Benjamin was a key allotment. It would have been nice to have a map that depicted visually the regional significance of the tribal allotments, though his prose amply discusses this.

In the monarchic portion of ZAB’s historical section, Rasmussen offers many helpful maps and visuals. I had never seen several of the kinds of maps that he includes. For instance, Rasmussen includes a map of Solomon’s “sphere of influence” that was interlaced with the major trade routes through the region (p. 146). This gives one a sense of Israel’s international economic significance. There is also a map of the twelve administrative divisions of Solomon’s kingdom (p. 148), which show the reconfiguration of the kingdom under the monarchy as depicted by biblical writers. While military battles raged in the monarchic period, Rasmussen mercifully avoids the need to depict each battle. Instead, he provides maps that show the general direction of “Philistine pressure” or “Egyptian Pressure” on the land of Israel that enable biblical readers to imagine the general shape of any battle (p. 159). On occasion, he depicts a key battle, though he judiciously avoids crowded maps. Other unique maps include one that shows the progressive expansion of the Assyrians (p. 160) and another that depicts the regions in which Elisha and Elijah were active (p. 161).

After the geographical history of the monarchy, Rasmussen offers an overview and visual tour of Judah’s lone existence in the land, the route of Judah’s exile to Babylon and flight to Egypt, and their return to the land and establishment of Yehud in the Persian period. The section on the arrival of the Greeks includes an impressive two-page map of Alexander’s Empire and discusses the influence of the Seleucids and Ptolemies on the land of Palestine. Two additional sections deal with the Hasmonean Dynasty and Early Roman Rule before Rasmussen turns to discuss the life and ministry of Jesus. Accurate topographical maps give one a sense of the routes that Jesus traveled, and also the geographical barriers that existed between Galileans, Samaritans, and Judeans. Subsequent sections address the expansion of the early Church, the Jewish revolt of A.D. 66–70, and the missionary journeys of Paul. One who has seen many Bible atlases and maps might have appreciated a break from the convention of simply drawing arrows to show Paul’s travel routes, though Rasmussen’s maps are clear. One possibility here would be to show readers how the cities to which Paul traveled connected the empire and thus served a strategic role in the expansion of early Christianity, or how they corresponded with or differed from major trade and travel routes. Finally, Rasmussen’s historical section closes by treating the seven churches of Revelation and helpfully discussing Jerusalem in detail. After completing his sweeping tour of biblical geography, Rasmussen shifts his focus to what he calls the “disciplines of historical geography” (pp. 254–62). Here he introduces the role of philology, toponymy, archaeology, and geography in a discipline that he has clearly mastered. My sense is that Rasmussen wants to equip and orient his readers to carry on the work that he so skillfully displayed in ZAB. This is a fitting and generous conclusion to the work, leaving readers not only with the fruits of his discipline but with its rudimentary tools. My hope is that others will follow his example.

My only major suggestion for improving ZAB would be to link maps and images more closely with the text, for example, thorough use of bold-print words that correspond to captions or place names. In sum, this atlas is a masterful visual and literary achievement, and it will undoubtedly endure as a staple for evangelical Bible students and teachers. In addition, ZAB provides a helpful guide for anyone who might want to augment their experience in Israel with a guided tour from Rasmussen.