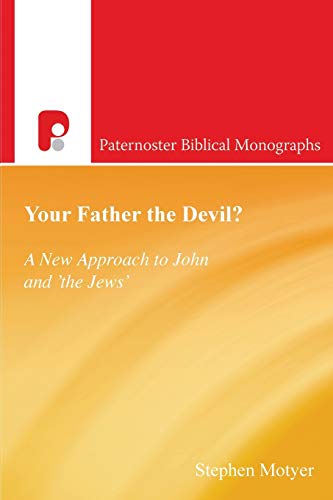 Your Father the Devil? A New Approach to John and ‘the Jews’

Among NT scholars today, there is a widespread view that the NT falls into a regrettable anti-Semitism at various points. John’s gospel is seen as a prime culprit, notably in chapter 8:31–59, where Jesus describes his Jewish opponents as being children of ‘your father the devil’. Readers of Themelios who appreciated the brief editorial comment criticising this view in a recent issue (vol. 23.2, February 1998) by Dr. Stephen Motyer of London Bible College, will also now appreciate the published form of Dr. Motyer’s London University Doctoral thesis. In it Motyer argues that, far from being anti-Semitic, the gospel would have been heard by Jews in the late first century ad as a meaningful response to their confusion and trauma associated with the destruction of Jerusalem in ad 70. He speaks of the evangelist standing alongside his fellow Jews, sharing their pain, and he comments that ‘with great creativity he carved a gospel which not only recorded the story as he understood it, but he told it in a way which brought out its deep relevance for Israel in her need, and as passionately and attractively as possible’ (220). Motyer suggest that John’s gospel, far from being an embarrassment to us today after the Holocaust, is, if correctly understood, a model.

Motyer reaches this conclusion by an impressive argument. He starts with a substantial and very useful discussion of method, reviewing critically the approaches of recent scholars, such as R.A. Culpepper, J.L. Martyn, and J. Ashton. He is sharply critical of J.L. Martyn’s influential thesis that John’s gospel reflects the painful split between church and synagogue following the Council of Jamnia, quoting Wayne Meeks’ comment about a ‘red herring in johannine research’. He also seeks to plot a path between modern literary (synchronic) approaches that focus on the text and ignore historical context and old historical (diachronic) approaches. The method he offers is one, to ‘seek, within the text indications of its social setting’, i.e. to look for ‘points of sensitivity’ in the text; two, to look outside the text for a historical background which may account for these points of sensitivity; and three, to return to the text and read it against the background identified.

Motyer then proceeds to identity various ‘points of sensitivity’ in John, including the temple and its festivals, the law and its meaning, revelation from heaven, Judaism and ‘the Jews’, faith and signs. Having discussed these, he then goes out of the text and finds that these points of sensitivity fit very well the concerns of the Jews in the period after the fall of Jerusalem in ad 70. It was a period of agonising over what happened—over temple, law, revelation and the future, with different Jews and Jewish groups offering different explanations. John’s gospel seems to fit this context.

Having argued this, Motyer can return to the text, and he looks particularly at 8:31–59, but in the broader context of the whole of John 5–12, suggesting how these chapters would have been heard in the context he has proposed. He finds all sorts of connections: in chapter 9, for example, the story of the man born blind, discusses the relation of sin and suffering (very relevant to Jews after ad 70), describes the restoration from ‘exile’ (blindness in the man’s case), and a transference of worship from the synagogue to Jesus. One of the key issues being debated in the gospel is, clearly, the question of Jesus: is he the prophet like Moses of Deuteronomy 18, who people should listen to, or is he the false prophet of Deuteronomy 13 who proclaims ‘gods you do not know’ and who should be put to death? John’s gospel is remarkably honest in portraying both sides of such arguments.

On the controversial chapter 8, Motyer finds no anti-Semitism: the strong language has plenty of parallels, e.g. in the accusations that Jesus is demon-possessed; and it functions as in the OT prophets like Hosea, namely as a strong appeal. ‘You are of your father the devil’ is not an ontological statement about an unchangeable state, but a moral accusation. ‘Interpreted against this background, even, “you are of your father the devil” becomes, in its context, a passionate appeal to change direction’ (212). Motyer concludes that the passages he examines in John’s gospel fit the context of the late first-century Judaism as he proposed, with its interest in ‘sin, death and judgment, freedom and slavery, Abraham and the covenant, vision and eternal life’ (210).

Motyer’s book is to be warmly recommended. It is well written and fully documented, though not lightweight or reading for beginners. Its comments on method are helpful, though I wondered whether Motyer’s acquiescence in the modern tendency to look for the implied reader rather than for the author’s intention was necessary. (He did allow the author’s intention in occasionally!). His observations about the Jewish background to the debates in John’s gospel were repeatedly illuminating, even if he occasionally overplayed this, e.g. seeing more significance in Jesus’ absence from the festivals in chapters 6 and 8 than the text probably warrants. Motyer admits that some of the points of sensitivity that he identified as characterising Judaism after ad 70 also characterised the period before ad 70, and I would have been interested to see more discussion of the case for an early dating of John: he engages rather little with the views of John Robinson. He also discusses very little the question as to how much of what he examines actually goes back to Jesus, and whether this would affect his argument at all. I suspect that many of Motyer’s insights would apply to the words in Jesus’ context as in the evangelist’s later context. There are other detailed questions that might be asked: Motyer argues well that the ‘signs’ in John’s gospel are understood as evidence for faith, but his explanation that ‘faith’ by itself does not lead to eternal life in John’s gospel (even in Jn 3:16; 20:31) did not persuade me, though it is true that John knows of ‘faith’ that is partial or inadequate. Finally, I wonder if Motyer’s proposed context for the gospel fully accounted for the massive stress on christology in John—on Jesus as the word from God, on Jesus as ‘my Lord and my God’. The first letter of John suggests that John’s church at some point had a split over the issue of christology, and the major point of sensitivity in the gospel is arguably christology. Motyer makes some interesting brief remarks about a possible Ebionite christology; but I suspect that there is more to be said—about christology and ecclesiology, and that the writer of John had a broader range of questions to address than Motyer brings out.

His book remains a most useful and stimulating discussion, which takes our understanding of John’s gospel forward significantly.