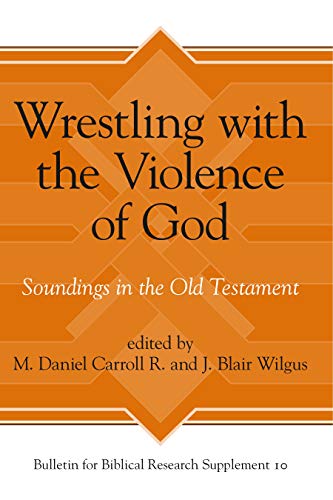 Wrestling with the Violence of God: Soundings in the Old Testament

Divine violence has become a heated discussion point in recent years, and Christians have been writing many volumes on this topic to defend against the attacks of the “new atheists” (for example, see Paul Copan and Matthew Flannagan’s Did God Really Command Genocide? Coming to Terms with the Justice of God [Grand Rapids: Baker, 2014]; Heath Thomas, Jeremy Evans, and Paul Copan’s Holy War in the Bible: Christian Morality and an Old Testament Problem [Downers Grove, IL: IVP Academic, 2013]; and Joshua Butler’s The Skeletons in God’s Closet [Nashville: Thomas Nelson, 2014). This particular volume is the result of a session of the Old Testament Theology study group at the 2012 annual meeting of the Evangelical Theological Society. Each author was assigned the task of looking at divine violence in a specific corpus of the Old Testament in which they are an expert, with the goal of situating divine violence within the overarching theology of the corpus.

The introductory chapter by the editors sets up the issue by describing the problem that many have with the violent deity of the Old Testament and how Christians have responded. For those unfamiliar with academic study of the topic, this chapter is a good place to start and the very full footnotes direct the reader to the essential works on the topic. In short, the problem revolves around serving a God who acts in violent ways and commands his people to act in violent ways; the preeminent example is the commanded destruction of the Canaanites, which sounds very similar to the modern definition of genocide. If we then proclaim that God loves the world and sent his Son to die for us, how can we reconcile the gospel with such harsh actions against large groups of humans in the Old Testament?

In the second chapter Paul Kissling addresses the “near-sacrifice of Isaac” in Genesis 22 (often called the Aqedah). He summarizes his article with the following words:

The third chapter, by Daniel Block, covers Deuteronomy by looking at the forms, targets, and motivation for divine violence. Highlighting how both non-Israelites and Israelites were targets of YHWH’s violence, he shows how YHWH acts violently in response to moral offenses (usually those of the Israelites) and ungodly religious conduct (primarily referring to the Canaanites). In particular, YHWH acts violently against the Israelites for two types of behaviors: “those that challenge the integrity of human relationships, especially within the family and the clan, and those that challenge the integrity of God’s relationship with his people” (p. 37). YHWH acts “within the framework of divine perfection, justice, fidelity, integrity, righteousness, and consistency” (p. 36). Block ends the chapter with ten very helpful observations to help us think through the commanded destruction of the Canaanites, including its basis in divine command, its background in Genesis, its focus on sin rather than ethnicity, and its paradigmatic role showing that we all deserve judgment.

Hélène Dallaire examines the book of Joshua in chapter five, briefly covering the history of interpretation, the view that the book was written during the time of Josiah, and how YHWH acts as a warrior god in the book. The second half of the chapter looks at the rhetoric of violence in the book, emphasizing that the Canaanites could have accepted the Israelites peacefully and that the Canaanites were not worse than other nations (though she grants the possibility that a small portion of the Canaanites might have been this evil). Recognition of the genre of Joshua leads us to reading the book not “as an exact description of the events but rather as historical national literature in which the accounts reflect the literary traditions of the day, the rhetoric of military records, and the theological language of Israel” (p. 72).

In chapter five David Firth studies the imprecatory psalms. After identifying the characteristics of the individual and communal imprecatory psalms, he concludes that Christians may use such prayers today because YHWH continues to care about justice, but only as an extreme ethic as they recognize their own powerlessness and examine carefully the basis of their desire for vengeance. Similarly, Heath Thomas surveys divine violence in Lamentations in chapter six by helpfully dividing the topic into divine passivity, distance, and activity. In a world where divine passivity and distance seem much more real to us than divine violence, the book of Lamentations guides us as we face these categories of divine violence because “Lamentations negotiates violence and pain primarily through prayer, especially confession and complaint” (p. 108).

In a study of divine violence in Amos, M. Daniel Carroll R. reminds us of the importance of understanding the culture of the time and the nature of judgment, as “divine violence is a response to human violence” (pp. 120–21). While this may sound like special pleading (why does God violently punish someone for using violence?), Carroll argues that it is based on lex talionis, in which the punishment corresponds to the transgression (pp. 122–23). However, YHWH does not delight to punish, and the final passage of the book reminds the reader that God’s goal is redemption more than judgment. Likewise, the final chapter on Jeremiah by Elmer Martens demonstrates once again that YHWH is a God of both anger (because of his justice) as well as love and mercy, but the eschatological images in Jeremiah emphasize the love of God. Martens is careful, though, to emphasize that we cannot just remove the violent texts because we may not like them: “It is more faithful to the biblical text to live with the conundrum of a God who defies neat characterization than to wiggle around some inconvenient truths” (p. 149).

Like most multi-author books, this book struggles at points with coherence and repetition (for example, the chapters and Deuteronomy and Joshua cover much of the same ground). Though it would be churlish to demand the book to be exhaustive, several important aspects of divine violence are missing (for example, why does YHWH allow Cain to live but then destroys the world in the flood?). However, overall, the chapters included in the book provide the reader with good models of how to interact with difficult cases of divine violence in the Old Testament and will be helpful to any who are concerned about serving a God who has sometimes acted in violent ways which trouble modern readers. While the problem can be partially mitigated through better exegesis of biblical texts, it cannot be removed entirely through such methods. That is to say, modern interpreters of the Bible’s ethical dilemmas will need to reexamine their ideas of what is morally appropriate for God.