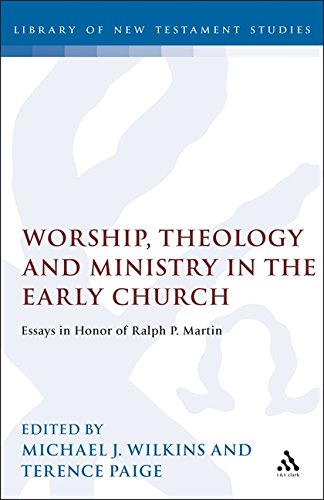 Martin’s co-workers, students and colleagues have produced a collection of 17 articles grouped together under the headings: worship, theology and ministry.

L. Morris sees the influence of the synagogue in the Christian emphasis on regular weekly gatherings, the reading of Scripture, and religious instruction. Each of these elements, however, was uniquely shaped in the context of the apostolic church: Sunday became the weekly time for worship; apostolic writings were read along with the OT scriptures; and the implications of the gospel rather than the law became the focus of instruction. G. Stanton further elaborates on the distinctive character of Christian worship, drawing from the ‘outsider’ Pliny’s report to Trajan and the ‘insider’ who wrote the Kerygma Petrou. E. Best judiciously examines the modification of credal and liturgical material in Ephesians, suggesting that Ephesians 4:4–6 and 5:25b are built upon pre-existing creeds. D. Guthrie asserts that the scenes of heavenly worship, integral to the structure of the book of Revelation, provide a pattern (and perhaps a corrective!) for earthly worship. They call us to appreciate the greatness and uniqueness of Christ, humbly to adore him with reverence and awe.

The theology section contains eight essays. D.A. Hagner argues that Matthew gives far more place to the indicative than is often realized. For Matthew, as for Paul, the call to righteousness is an invitation to respond to God’s grace. According to C. Brown, the parable of the unjust steward (Lk. 16:1–13) functions at two levels: on the economic level, it condemns oppressive social structures; on the spiritual level, it serves as an indictment against the Pharisees who compound the burdens of those caught up in sin. It is thus an affirmation of Jesus’ values, his concern for the outcasts and marginalized. J.D.G. Dunn argues that the early Pauline epistles show little concern to distinguish between Christ and the church as ‘the body’; the later Paulines attempt to clarify the differences by presenting Christ as the ‘head’ of his church, the body. According to Dunn, both elements must receive their due weight, for together they enable Christ to give identity to the church without losing his identity within the church. A.T. Lincoln suggests that in Romans Abraham serves as a model of one who is ‘strong in faith’ for Jewish and Gentile Christians struggling to achieve unity in Rome. T. Paige suggests that the problems at Corinth can be best understood against the backdrop of Stoic thought. I.H. Marshall concludes that the parousia has an important place in our proclamation, however it is not as central as the death and resurrection of Jesus. It is not a matter for speculation, rather its key value is that it places Jesus at the centre of our hope. In a provocative article, E.E. Ellis argues that the concept of innocent apostolic pseudepigrapha must be abandoned. Although certain ancient writings were attributed to famous sages with no intent to deceive, Ellis maintains that the purported apostolic pseudepigrapha are not analogous to them. Since they were produced in a community which gave unique authority to apostolic teaching and which continued to question the apostolic status of various documents, if they are indeed pseudonymous, the element of deception cannot be dismissed. Thus, Ellis asserts that scholars cannot judge apostolic letters to be both pseudepigraphic and worthy of the canon. M. Meye Thompson sheds light on the enigmatic text of 1 John 5:16 by placing it in the context of Johannine and Jewish attitudes toward intercession. This text thus distinguishes between kinds of sinners rather than sins: those who ‘sin unto death’ are not believers, while those whose ‘sin is not unto death’ are. Thompson’s warning is particularly appropriate in our age of pluralism: ‘Christians offer false hope when they offer forgiveness apart from Christ or apart from the repentance of the sinner’ (p. 245).

Five articles form the concluding ministry section. G.F. Hawthorne, drawing on the pericope of the ‘Epileptic Boy’ (Mk. 9:14–29 and par.), demonstrates how effective ministry is rooted in faith. C. Kruse uncovers the reasons for Paul’s persecution by the Jews. P.T. O’Brien notes how in Philippians, Jesus, Timothy, Epaphroditus and Paul himself are presented as models for the Philippians to emulate. In view of 1 Peter 2:1–10, E. Schweizer suggests that the priestly function of every believer is to proclaim the wonderful deeds of God to the non-Christian world. The weak and suffering members of the church, through their silent obedience (2:13–3:17), often preach most eloquently. M.J. Wilkins completes this volume with a discussion of discipleship in the apostolic fathers.

Collectively, these essays are significant. They highlight themes of special significance for evangelicals: unity in the midst of diversity; apostolic authority; the uniqueness of Christ; and the centrality of the cross. Like the work of the man they honour, they also reflect the strength of evangelical NT scholarship.