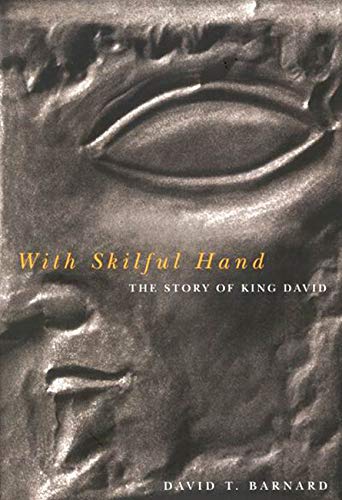 With Skilful Hand: The Story of King David, M-Qshr 29

Although the title might lead one to expect another contribution to the current debate about the life of David, this book takes a rather different tact. Instead, it presents David’s story through an imaginative collection of documents, purporting to be written by those who knew him, which are tied together by comments from the scribe who supposedly gathered them. This is followed by a series of concluding reflections in which David himself speaks before a final comment by the scribe. The documents are mostly letters between characters who are mentioned in the books of Samuel, thought there are a number of characters who have been invented by Barnard, or named by him so as to make this workable. An appendix lists all the characters included in the book, indicating the extent to which Barnard has gone beyond the biblical material in his characterization of them. In general, these documents follow the evidence of the books of Samuel quite closely, though the comments on the succession of Solomon perhaps fit more easily with Chronicles than kings. There is also an assumption that David is indeed the author of many of the psalms associated with him.

Rather than being another scholarly portrait of David, Barnard seeks to open up to us a range of ways in which David might have been seen within Israel, using the voices of different characters to explore their attitudes to him. Such an approach depends upon the ways in which both author and reader are able to engage in an imaginative process. Barnard needs to create a host of different characters whose style and purposes can be appreciated, whilst readers need to engage with these characters with at least a certain level of disbelief suspended. Yet readers can only do this if Barnard’s characters are believable. Many of them are, but there were many of them are, but there were many points at which they sounded suspiciously contemporary in their attitudes. This is especially the case in the letters written by Ahinoam and Abigail in which they describe their response to David and their expectations of marriage to him. Surely ancient women in a political and polygamous marriage would not have expected their marriage relationships to be ones in which their husband confided in them. Such marriages had a rather different purpose. Even Michal, whose sufferings are prominent in the books of Samuel, comes across as someone whose expectations are rather modern. Curiously, we never hear anything from Bathsheba. Of course, since the biblical accounts tell us so little about these women, we are free to imagine them in any number of ways, but that imagination needs of be tempered by some cross-cultural understanding of marriage and politics. At other points, Barnard’s imagination works more effectively because it is more tightly controlled by the biblical material. This is especially the case with the reflections of the scribe, Zadok who is supposedly reflecting on these documents several centuries later, and who is probably a cipher for Barnard himself. Zadok continually wrestles with the ambiguity that is inherent in the presentation of David, finally seeing a lesson of the hope of divine mercy in David’s experience. This is not a book that resolves the questions that cluster around David’s story, but in ways that are both insightful and frustrating the book may help readers appreciate the different ways in which David was perceived, differences which are latent in the biblical text.