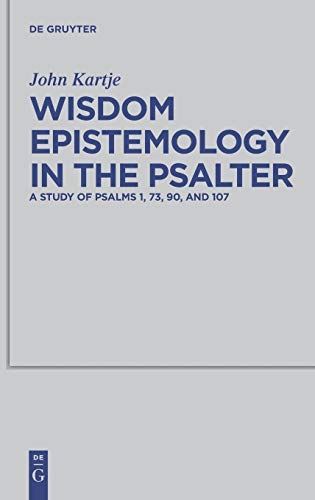 The present monograph by John Kartje, an astrophysicist turned biblical scholar, analyzes four prominently located psalms in the Psalter with a focus on understanding the epistemological settings behind the texts. Kartje concludes that these psalms, in their canonical order, capture an “epistemological progression” in acknowledging, confronting and engaging the question of human suffering and flourishing (pp. 171–72).

By his own assessment, Kartje’s angle of analysis is unprecedented in Psalms scholarship (p. 52), though it remains to be seen if the majority of Psalms scholars will adopt his conclusions. His basic premise is that a “society’s ‘social epistemology’ is largely responsible for structuring its operative worldview” (p. 77). He argues that conceptual metaphors in its texts are tools for organizing and transmitting a society’s knowledge. The texts contain information about how such knowledge is to be understood, challenged, and passed on to the next generation. Kartje’s method is summed up by three fundamental questions: “(1) what propositions does this text contain; (2) do the propositions constitute genuine knowledge; (3) how are the propositions related to the socially constructed worldview represented in the text?” (p. 29). In what follows, we will illustrate Kartje’s application of his method to Psalm 1, which is also representative of the strengths and weaknesses in the rest of his analysis.

Firstly, the main proposition of a text can be observed by its conceptual metaphor(s). In Psalm 1, the main conceptual metaphor is “Life Is a Journey” (p. 78). This metaphor invites questions about its nature (e.g., Who are the travelers? What are the destinations? How can one succeed in the journey?). Psalm 1, however, provides limited answers to these questions. Here, the knowledge proposition is simply that “the [Torah-pious] righteous prosper and the wicked fail” (p. 83).

Secondly, does this proposition constitute genuine knowledge that corresponds to reality? Kartje summarizes that Psalm 1 does not show explicitly how this knowledge is drawn from empirical observations in life. The proposition of the two different journeys of the righteous and the wicked, as a fixed and binary state of affairs, is intended to be accepted without question by the original readers of Psalm 1.

Thirdly, how is this proposition related to ancient Israel’s worldview? Kartje posits that readers of Psalm 1 apply their knowledge about the righteous and wicked to discerning moral character within their social context (p. 83). If the readers perceive a man as “righteous” yet who is suffering, the limited worldview presented in Psalm 1 will lead them to question their original supposition that the man is “righteous.” The readers will have to modify their assessment of the sufferer’s moral character based on the binary worldview of Psalm 1.

Nonetheless, by comparing the analyses between the four psalms, Kartje argues for an “epistemological progression” in how the Psalter understands human suffering (pp. 167–72). Psalm 73 complicates the knowledge proposition of Psalm 1 by showing that the wicked can prosper and the righteous can suffer. Moreover, the seeming impossibility of moving across the fixed categories of blessedness and cursedness, as presented in Psalm 1, becomes surprisingly possible in Psalm 90. By the time Psalm 107 arrives, “suffering is not necessarily tied to moral culpability and even the wicked have access to divine salvation” (p. 157). Thus, Kartje argues for an editorially intended “epistemological progression” presented across the Psalter.

Three features stand out in Kartje’s proposal. First, Kartje’s methodological innovation requires one to build bridges between modern Western theories of social epistemology and how the ancient near Eastern recipients of the Psalter actually perceived knowledge. Kartje is simultaneously reconstructing the epistemology of the society “behind” the text and prescribing an epistemological program in “front” of the text. This circularity of method raises questions about whether distinctions between the reconstruction and prescription can be made and how valid is that epistemology reconstructed from the texts. Second, what makes Kartje’s thesis coherent is his selection, limitation, and comparison of Pss 1, 73, 90, and 107. It is through comparing the epistemological insights in these psalms that we can trace the “progression” in addressing human suffering claimed by Kartje. His basis for selecting these psalms is that they contain “wisdom-centered” literary elements that function to address the “fundamental problem of why people suffer” (p. 67). However, herein also lies the problem––these four psalms are not the only psalms that meet this criterion, for Kartje has passed over many psalms that would problematize his thesis. For instance, if Psalm 112, with a similar proposition to Psalm 1, were analyzed, the epistemological “progression” that Kartje proposes would be undermined since Psalm 112 is canonically located after Psalm 90. Third, although Kartje highlights the canonical order of the four psalms and a possible “wisdom-centered” influence that shapes an “epistemological progression” in the Psalms (pp. 69, 172–73), his work, in toto, is not an argument for the canonical shape of the Psalter. Arguments for the canonical structuring of the Psalter are limited by Kartje to the epistemological study of the four psalms of interest. Important themes, such as Davidic kingship or Yhwh’s kingship, are only featured lightly (pp. 88–87, 172–73).

Despite these methodological concerns, Kartje’s work remains a unique contribution and will be helpful to scholars working with epistemological and social-scientific approaches to the OT, and especially to the wisdom psalms.