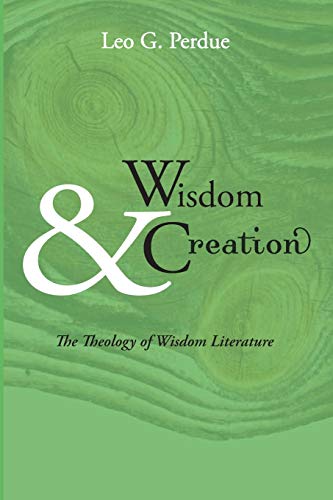 Wisdom and Creation: The Theology of Wisdom Literature

Do the maxims of Proverbs merely borrow from secular wisdom sayings of the Ancient Near East? How does one reconcile the pessimistic declarations of Job and Ecclesiastes with more “orthodox” biblical books? And perhaps most importantly, how does wisdom fit into biblical theology when the wisdom literature never mentions the great events of Israel’s history, such as the exodus and God’s covenant with Israel? Leo Perdue’s Wisdom and Creation skillfully explores these and other questions. The present volume is the 2009 Wipf & Stock reprint of Perdue’s 1994 book by the same title with Abingdon.

This reprint edition adds a two-page Preface in which Perdue affirms his views in the original book, while acknowledging that his many publications on the OT wisdom literature since then (e.g., The Sword and the Stylus: An Introduction to Wisdom in the Age of Empires [Grand Rapids: Eerdmans, 2008]; Wisdom Literature: A Theological History [Louisville: Westminster John Knox, 2007]) have advanced his arguments significantly beyond the book’s first publication. The nearly two decades since Wisdom and Creation’s publication have also borne out Perdue’s main thesis, namely, that wisdom literature occupies a central place within OT theology because of its robust theology of creation. The broad acceptance of this thesis has rekindled an interest among OT theologians to reconsider the place of wisdom literature within OT theology. The older consensus, in contrast, held that biblical wisdom was mostly secular in orientation and a relative latecomer to the development of Israel’s literary traditions.

Perdue’s book is structured in three parts. Part I is a two-chapter examination of the somewhat awkward relationship that wisdom literature has traditionally had with OT theology. Chapter 1 describes several traditional approaches to integrating wisdom literature with OT theology, such as those of G. Ernest Wright and Gerhard von Rad. Through a critique of various OT scholars and their treatment of wisdom literature, Perdue concludes that the motif of creation has been neglected in biblical theology due to a bias toward salvation history. In responding to this bias, ch. 2 offers a prescriptive proposal for using imagination, rhetoric, and the study of metaphor to recover the ability of wisdom literature to envision alternative worlds. The marked differences in genre between wisdom literature and other biblical books can then be explained as the sages’ attempts to offer a fresh account of God’s ongoing creational activity in the world. This analysis is helpful in describing the manifold ways in which the sages conceived of God and his world, though Perdue’s work occasionally exhibits the postmodernist tendency to argue that the use of metaphorical language with reference to God is always open-ended and therefore non-referential in nature (e.g., Perdue’s analysis of God as a divine warrior, pp. 56–57).

Part II of Wisdom and Creation is a study of the canonical and deutero-canonical wisdom books: Proverbs (ch. 3), Job (ch. 4), Ecclesiastes (ch. 5), Ben Sira (ch. 6), and the Wisdom of Solomon (ch. 7). These chapters are not a full treatment of each book, but focus on the theme of wisdom’s role in creation through the various metaphors used by the sages. Perdue’s analysis takes more or less standard critical positions on the composition of the wisdom books, as in the dating of Ecclesiastes to the late fourth or early third century B.C. (p. 193). Even if one disagrees with such views, however, Perdue has provided a groundbreaking, if rather selective, treatment of metaphors for God and humanity in the wisdom literature. On creation in Proverbs, for example, he rightly concludes, “Through the activation of imagination, the sages in Proverbs portray the cosmos as the creation of a God who established and now oversees the structures of life” (p. 121). Such a conclusion goes a long way toward redeeming the reputation of Proverbs as a secular or humanistic document.

Part III briefly summarizes the metaphors with which the sages conceive of the world and humanity. Perdue makes an important concession here regarding his hermeneutical method: “In presenting the theology of the sages, I have gone beyond what the sages often did with their language. I have even explicitly named the metaphors for God, to which the sages alluded but usually did not directly state” (p. 326). Perdue’s tendency to go beyond the text raises several questions on whether his analysis has over-interpreted the metaphors of wisdom literature. To what extent were the various metaphors used by the sages intended to illuminate only one aspect of God’s creation? When allusions are less than obvious, as Perdue concedes, how can the interpreter be certain that the author intended them?

The new preface to Perdue’s book aptly summarizes the strengths and weaknesses of his approach: “Imagination, rhetoric, and metaphor recapture a biblical faith in all of its diversity that avoids the debate and controversy evoked by creedal confessions” (p. 6). It is indeed true that propositional statements, working on their own, cannot render the character of God adequately. But Perdue’s avoidance of creedal confessions in favor of the metaphorical language of wisdom and creation hardly presents a constructive method for doing biblical theology. Thus Perdue’s book will prove useful for understanding wisdom literature within its own conceptual world, while being inadequate in rejoining wisdom literature to the task of biblical theology.