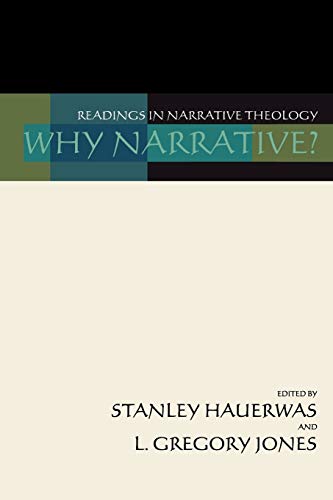 Why Narrative? Readings in Narrative Theology

The use of narrative (or story) as an approach to theology and ethics, although recently gaining interest, is replete with confusion and lack of focus. Whereas many are talking about it, few seem to be talking about the same thing or even giving the appearance of understanding what the others are saying. The result has been that many write narrative off as just another religious fad, while critical discussion by those more interested in what narrative can do in regard to revitalizing theology and ethics is frustrated by lack of direction and common ground.

Why Narrative? is an attempt to help those interested in cutting through some of the confusion in narrative theology and ethics to do so, and also to help set an agenda for further study. The introduction is very helpful, especially for those with little or no familiarity with a narrative approach. The editors do a good job introducing the major issues in each of the essays and pointing out the different ways each author contributes to the overall discussion. This provides just enough of a framework for one to begin to understand the interest (or agenda) of each author and the issues raised by these particular essays without predisposing the reader to any one particular understanding of what ‘ought to be going on’.

The book is divided into three parts: I. Narrative Rediscovered; II. Narrative as a Critical Tool; and III. Narrative’s Theological Significance. The anthology moves from general frameworks within which to apply a narrative approach to specific applications of such an approach.

Part I is a collection of four essays, all of which are classics and have been very influential in the rediscovery of narrative in their perspective fields.

This section begins with an essay on the influence of narrative on theology: H. Richard Niebuhr’s ‘The Story of Our Life’. Niebuhr argues that the notion of story is imperative for understanding the nature of revelation. It is followed by Hans Frei, Apologetics, Criticism, and the Loss of Narrative Interpretation’, where Frei demonstrates the results of neglecting a narrative approach to biblical interpretation. Next, ‘The Narrative Quality of Experience’, by Stephen Crites, focuses on the primacy of narrative in regard to understanding human experience. Finally, ‘The Virtues, the Unity of a Human Life, and the Concept of a Tradition’, by Alasdair Maclntyre, argues for the rediscovery of the significance of narrative as he builds a case for a virtue approach to ethics.

The five readings in Part II focus not so much on stimulating interest in the use of narrative as on the crucial rôle narrative can (or should) play as a methodology for understanding various topics. Here narrative is viewed essentially as a tool for the study of topics such as metaphysics, epistemology, ethics, theology and sociology.

Part III is a group of essays which takes many of the themes developed in the preceding sections and applies them in order to illustrate the theological significance of the use of narrative. These essays tend to focus on very specific issues and argue for particular conclusions in contemporary theological debates.

For example, Michael Root argues for the necessity of narrative in correctly understanding soteriology. His primary thesis is that ‘the structure and explanatory power [of soteriology] is a function of its narrative form’. It is through what Root calls a ‘redescription’ of the Christian story that soteriology carries out its task.

Not all of the essays are this specific, but they all do illustrate how a narrative approach relates to and helps inform a variety of theological debates. In order not to give the misleading impression that the use of narrative presupposes certain theological convictions, the editors have included several sets of essays which argue quite different points of view on the same issue.

The editors’ hope is to ‘help clarify what is at stake and hence elevate the debates about narrative to a higher level’. If this does not happen it will not be due to a lack of opportunity. This anthology certainly provides the initial organization needed to stimulate focused, well-defined discussion on a myriad of issues related to narrative and theology and ethics. The essays were well chosen both for quality and importance to the discussion. The editors are to be commended for providing a common point from which much fruitful discussion can occur.

One word of caution to anyone who is interested in reading this anthology: it is intended to be used in a relatively advanced setting for the purpose of stimulating discussion about narrative approaches. Because of this, one must be prepared to be challenged in several ways. Most of the essays were written by specialists to specialists in fairly diverse disciplines, thus the subtleties of the distinctions for which the authors argue can sometimes be missed due to a lack of background. Several of the articles are quite difficult for the beginner.

Also, the implications of a narrative approach to theology can be far-reaching. The writers of these essays are in many respects carving out a new pathway. There are many questions to be asked and many ideas which must be pursued even if it appears that that pathway is taking us into forbidden territory.