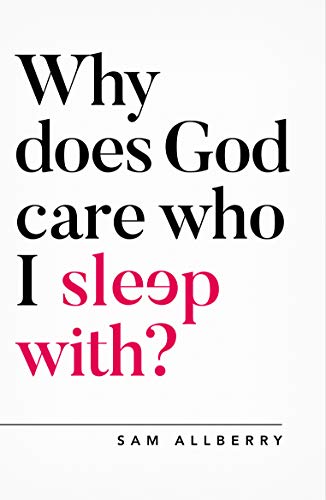 Why Does God Care Who I Sleep With?

For a hypersexualized culture, in which sex and sexuality are flaunted, obsessed over, and constantly debated, Sam Allberry’s book is a welcome breath of biblically based and pastorally relevant fresh air. By going back to first principles and outlining a theology of sex, Allberry communicates vital truths to everyday readers who are seeking to know why God cares about their sexuality. Written in order to be accessible to a broad audience, this short volume points to the beauty and purpose of sex, and the reality of unfulfillment and waiting, while engaging readers with a warm personal voice and sermonesque illustrations—features which help to make the communication of ideas clear and compelling.

For those not familiar with his work, Allberry serves as a global speaker with Ravi Zacharias International Ministries and has been a long-time pastor and preacher in the UK. He studied theology at Oxford, is an ordained minister of the Church of England and has ministered at St. Ebbe’s Church, Oxford and St. Mary’s Church, Maidenhead. What makes this book even more credible is the fact that Allberry is a single man, is attracted to the same sex, and is committed to celibacy (see Allberry’s previous books, Is God Anti-Gay? [London: Good Book, 2013] and 7 Myths about Singleness [Wheaton, IL: Crossway, 2019]).

Written as part of a series with the Oxford Centre for Christian Apologetics, the title of the book is meant to capture the attention of those seeking an entry level understanding of Christian sexual ethics—both unbelieving seekers who are intrigued to know more about the Bible’s teaching and believers who are wanting to (re)discover applied biblical sexuality. In a relatively short book (less than 130 pages), Allberry paints the storyline of biblical sexuality from creation to resurrection, while also holding in tension the current “now and not yet” of sexual and relational fulfillment.

Chapters 1–2 set the scene for the need to cherish the body, because there is intrinsic worth for humanity made in the image of God. Allberry highlights the #MeToo movement as a way in which secular society condemns abuse and values human sexuality. Similarly, Christians “should be the last people on earth to show indifference to abuse, let alone enabling or perpetrating it in any way” (p. 15), for Jesus too had a high view of the body. Yet, having a high view of the body does not mean that Christians undervalue sex. Rather, “being particularly careful about something is often a sign of its special worth. I’m particular about physical intimacy not because I value it so little, but because I value it so much” (p. 23, italics original). Ultimately, Christians understand that “sex matters to God because people do” (p. 33).

Chapters 3–4 explore the purpose and limits of sexual and romantic expression. Allberry suggests that the question is not whether there ought to be limits but where these limits ought to lie, for even secular society has boundaries for sexual expression. To understand the purpose and limits of sex, we have to refer to the creator of sex: God himself. For “sex was God’s idea, not ours. It is not something we discovered behind God’s back…. His first command to humanity in the Bible involves and necessitates sex” (p. 37).

Having established the need for a theo-ethical approach to sexuality, chapters 5–6 show why God’s will for human sexual expression is radical yet beautiful. In a time when powerful men were allowed to sexually dominate slaves and women were seen as objects for sexual gratification, the ethics of the New Testament were far from “old-fashioned” or “prudish”; rather they ushered in (what Kyle Harper has rightly called) “the first sexual revolution” (p. 59). Indeed, the countercultural ideas of mutuality, respect and consent derived from the fact that “Christian sexual ethics were not determined by a person’s status and social value in Roman society but by the unique and complementary dignity of men and women as God’s image-bearers” (p. 59). Allberry then bridges the historical landscapes of the Bible and our own time, arguing that the boundaries revealed in the New Testament are still relevant for us today. He writes, “The moral inconsistencies and blindspots of the Roman Empire are now all too apparent to us. And yet we today have our own equivalents, and the teaching of the Bible helps us to see them more clearly” (p. 70).

Allberry next provides a series of pastoral reflections on the gospel and its relation to sexual sin (ch. 7), desire and sexual fulfilment (ch. 8) and sexual freedom (ch. 9). He concludes with this wise exhortation: “Romantic or sexual love … can be difficult to restrain or control once awakened.… God cares who we sleep with because he cares that we really do love each other well, and that might mean loving in a different way to how we feel” (pp. 119–20). In the final two chapters, Allberry situates sex within its biblical theological context, highlighting its place in the bigger and better story of God’s saving purposes.

Why Does God care Who I Sleep With? is highly recommended for believers and nonbelievers alike, and should be read alongside the author’s prior book, 7 Myths about Singleness. With the publication of both titles, Allberry ably demonstrates that singleness does not preclude someone from exploring Scripture’s teaching on marriage, sexual ethics and matters relating to family life. Furthermore, as a writer, presenter and pastor who is committed to celibacy, Allberry is in a unique place not only to speak from a place of experience and conviction but to be a model for many who wish to live out faithful obedience. Perhaps, if the reader may allow some poetic license in reappropriating 1 Timothy 4:12, Allberry does not let others look down upon him because he is single, celibate and same-sex attracted but sets an example for the believers in speech, in conduct, in love, in faith and in purity.