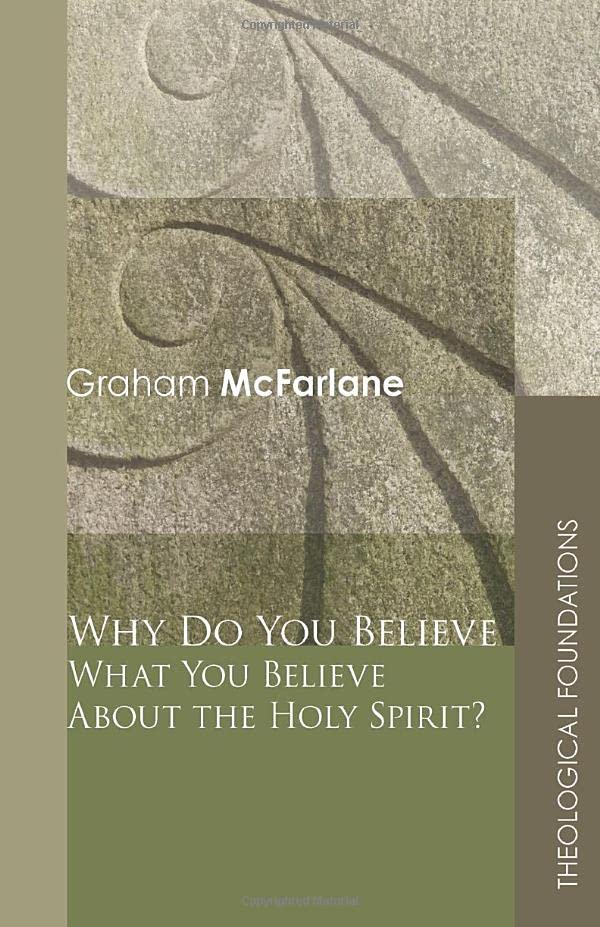 This book is part of a new series, ‘Theological Foundations,’ exploring the major tenets of Christian faith at a popular level. McFarlane examines whether our beliefs fit with the Bible and tradition and whether they are relevant to the present. He employs thought-provoking questions together with simple illustrations and diagrams.

McFarlane complains at our tendency to view the Spirit in an impersonal manner. Surprisingly, he offers the image of the Spirit as a force field. The accompanying illustration suggests a very impersonal image! This image is used throughout the rest of the book. This seemed particularly odd, given that McFarlane makes it clear that the NT personalises the Spirit.

Section three describes debates within the Patristic Church about the deity and Person of the Holy Spirit. The contributions of Athanasius, the Cappadocian Fathers and Augustine are outlined. I suspect that Augustine’s argument that the Spirit and the Son can be distinguished by their distinct relations, despite their identical essence, is not. explained clearly enough for someone unfamiliar with the question.

McFarlane next outlines Richard of St Victor’s argument that perfect love demands three participants. He does not mention that henceforth the ideas go beyond what the Nicene and Athanasian creeds require.

In section four McFarlane looks at two puritan writers. According to John Owen the Spirit creates a perfect body for the Son. Apparently Owen thought this body could not be bruised. In contrast. Edward Irving argued that Christ assumed sinful human nature, which the Spirit sanctified. Here I would have liked clearer guidance; Owen’s Christ seems insufficiently like us while Irving’s is not clearly without sin.

In section five McFarlane critiques modern views of the Spirit. He appeals to the work of John Zizioulas, who argues that God’s being is a Communion of Father, Son and Spirit and a paradigm for Church life.

Finally McFarlane offers a critique of ‘traditionalism’, ‘Charismatism’ and ‘Culturalism’. He suggests that the Celtic view of the Trinity and the Spirit preserves the biblical witness of traditionalism, the experience of Charismatism and the creativity of culturalism. Finally he tackles the problem of reconciling individuality and society. The Bible suggests that community and individuality arise within the context of God’s kingdom. Community and individual identity are exemplified by the Trinity. To live up to this paradigm, the Church will have to change its structures.

In summary, I would recommend this book to someone looking for a lively, engaging introduction to the development of ideas about the Holy Spirit. However, I would have appreciated slightly more concern to show that these ideas fit with Scripture and each other, ensuring that the theological foundations are sound.