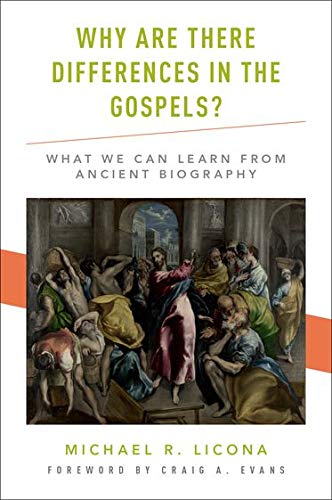 Why Are There Differences in the Gospels? What We Can Learn from Ancient Biography

To test his thesis, Licona first turns to two Greco-Roman literary genres. The first is the literary textbooks known as progymnasmata, written by Theon, Hermogenes and others, in which rhetorical devices are introduced and discussed. The second, which Licona covers in much greater detail, is the writings of the first century historian Plutarch. Plutarch wrote more than 60 biographies, or Lives, of which 50 have survived. Forty-six of these appear in pairs, where a prominent Greek figure is placed beside a prominent Roman one. Licona chooses for his study nine of these lives: Sertorius, Lucullus, Cicero, Pompey, Crassus, Caesar, Younger Cato, Brutus, and Anthony. These nine individuals lived at approximately the same time and most of them knew each other. This means the stories about them overlap and tend to be told again and again. From these nine lives, Licona examines 36 pericopes or events that appear in two or more Lives. He focuses especially on 30 of these which contain significant differences. His method is to first summarize the event in a kind of harmony of the various pericopes and then to identify and analyze the differences in Plutarch’s various tellings. Through this analysis, we see the kinds of modifications and alterations that Plutarch considers appropriate and acceptable for his biographical historiography.

Not surprisingly, according to Licona, Plutarch operates from the perspective of biographical relevance. He provides more details in those Lives where the event has greater relevance to that character and fewer details and less emphasis on those events that have less relevance. Also not surprisingly, Plutarch utilizes many compositional techniques found in the progymnasmata, including using synonyms, different wording, different syntax, etc.

Other compositional devices Licona observes in Plutarch are also important for Gospel analysis. These include transferal (words or deeds of one character are transferred to another), displacement (an event is moved from one context to another), conflation (two or more events or people are combined and narrated as one), compression (events are portrayed as occurring over a shorter period in one instance than in another), spotlighting (one character is emphasized to the neglect of others), simplification (details are omitted or altered for the sake of simplification), expansion (details that were unknown are added to fill out a story in a plausible manner), and paraphrasing (something similar is said using different words).

After this detailed analysis of Plutarch, Licona turns to the Gospels. In chapter 4, entitled, “Parallel Pericopes in the Canonical Gospels,” he examines 16 pericopes that appear in two or more Gospels. He follows the same methodology as with Plutarch, first summarizing the event in a harmonistic fashion and then analyzing the differences. Licona finds many of the same compositional techniques in the Gospels as in Plutarch. In line with the compositional textbooks, the Gospels substitute words and phrases, alter syntax, change the inflection of a term from singular to plural (or vice versa), add material in order to intensify, clarify, explain or expand something. They occasionally change speakers, as when Matthew twice turns Jesus’s one-sided address to his antagonists into a dialogue between the two. The order of events is sometimes inverted, especially in Luke. Matthew occasionally transfers what one person says to the lips of another. Much more commonly he compresses events. Literary spotlighting occurs (especially in John and Luke), where one character is emphasized so that another disappears or is minimalized. (Yet this is much less common in the Gospels than in Plutarch.) Licona concludes that only a handful of passages are not satisfactorily explained using specific compositional devices.

In chapter 5 Licona turns to the question of “synthetic chronology,” where an author creatively links stories together in a particular order for the purpose of literary artistry rather than chronology. Five examples from classical literature and five Gospel pericopes (two of which were examined earlier) are discussed here.

In his concluding chapter, Licona affirms that even the best historians and biographers of Jesus’s day were not committed to the kind of precision we often expect for historiography today. Writers told stories “in a manner that entertained, provided moral guidance, emphasized points they regarded as important, and paint a portrait of important people” (p. 198). Their adaptations were “not intended to distort the truth but to communicate it more effectively” (p. 198). Licona compares this to a photographer who touches up features of a romantic photograph not to distort it, but to bring out a “true representation” of the elements that were actually present. Details may be altered, but the truth is retained.

While the Gospels share many composition features with Greco-Roman biography, Licona also points out that the divergences among the Synoptics are much less dramatic than we find in other writers of the day. Furthermore, in common with Plutarch, differences in Gospel accounts of the same event tend to be limited to peripheral details, keeping the central message intact (p. 200).

Licona’s work is particularly helpful in placing the Gospels in their first century literary context. Most NT scholars today acknowledge that the closest first century genre to the NT Gospels is Greco-Roman biography. The Evangelists were not only Spirit-inspired writers, but also authors deeply embedded in their own time and place. Any study that looks more closely at this relationship is to be commended. Licona’s work is particularly innovative in examining the kinds of differences that arise in parallel accounts of the same events. Whether or not you agree with all of his conclusions, this is a fresh and original study that provides greater insight into the nature of the Gospels within their literary environment.

Licona’s work also rightly warns against extreme and far-fetched harmonization that sets up evangelicals for ridicule. At one point Licona reminds us that Harold Lindsell famously (or infamously) suggested that Peter actually denied Christ six times, three times before the rooster crowed for the first time (Matt 26:75) and then three more times before the rooster crowed a second time (Mk 14:72) (p. 159). Such harmonizing attempts do little to apologetically support the Gospels and give the impression that Christians are irrational and unreasonable. Licona sardonically notes that this kind of harmonization amounts to “subjecting the Gospel texts to a sort of hermeneutical waterboarding until they tell the exegete what he or she wants to hear” (p. 201). Licona concludes that “a truly high view of the Gospels as holy writ requires us to accept and respect them as God has given them to us rather than to force them into a frame shaped by how we think he should have” (p. 201, italics mine).

I also found it refreshing that Licona’s conclusions are for the most part presented in a tentative and cautious manner. He offers possibilities and probabilities rather than dogmatic assertions. Take for example Matthew’s tendency to introduce two characters where the other Synoptics have one. Did Jesus heal one demoniac in Gerasa, as in Mark (5:1–20) and Luke (8:26–39), or two, as in Matthew (8:28–34)? Licona offers various possibilities: Matthew may be working from a different source; or, he may be illustrating the reality of multiple demons by introducing a second man. Or, there may have actually been two men, but Mark (followed by Luke) uses the technique of literary spotlighting to highlight the one. This last, of course, is the traditional way of harmonizing the episodes. But is it the only way? Or does Greco-Roman storytelling allow a wider range of options?

The challenge, of course, is whether “non-harmonizing” solutions— even if they were common in the Greco-Roman world—cross the line from literary license to outright error. Do they violate the evangelical doctrine of the inerrancy of Scripture? One’s evaluation of Licona’s work will depend in part on their definition of inspiration and inerrancy and the qualifications one places on these doctrines. While many will find Licona’s conclusions reasonable and convincing (for the most part I did), others may conclude he has crossed a bridge too far.