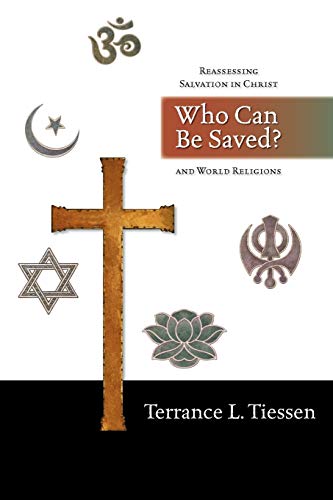 WHO THEN CAN BE SAVED? REASSESSING SALVATION IN CHRIST AND WORLD RELIGIONS

In the light of the breakdown in the exclusivist-inclusivist-pluralist categorization of responses to religions, and the resulting loss of an evangelical consensus, this book is a timely reassessment of the theology of salvation. The consequences for the theology and practice of mission are huge. From what we say about other religions to how and why we do evangelism, the question of how God saves is critical. This is not merely an academic debate about election and grace, judgement, or revelation, although it includes all those things. It’s about what we say to those genuinely concerned for their unevangelized ancestors, the parent worried about the eternal destiny of her dead child, or the relationship we have with our Muslim neighbours.

The author, a professor of theology from Manitoba, sets out to cover every possible theological and missiological angle. This exhaustive treatment is structured as 30 theses, which Tiessen defends with rigorous reference to a very wide range of sources. The result is a textbook treasury of historical and theological perspectives, each one treated with respect, even when Tiessen disagrees.

Tiessen is a self-confessed Calvinist who insists on the predestinating elective grace of God. But he has discovered a theological generosity which shifts him beyond classical reformed ecclesiocentrism to what is known as ‘accessibilism’. This makes salvation universally accessible by allowing that God does not restrict his saving purposes to the church and its mission. The boundaries between common and special grace become blurred. God can find a way of saving those who have never heard the gospel. He reveals something of himself through common grace in every cultural and religious context, but sometimes turns it into special revelation. Not that other religions can be instruments of salvation; Tiessen does not want to stray too far towards inclusivism or syncretism. But he concedes plenty of undeniable examples from mission history of those who have experienced the limitless creativity of God’s revealing presence and responded with faith.

But is this saving faith, we may ask, without a response to Christ? Tiessen insists that God does not by-pass the centrality of Christ, nor even does he deny the necessity of a personal response to Christ. However, for this to be possible, Tiessen suggests that each person has an encounter with Christ at death. Although never having heard of Jesus, if someone responded with faith to God’s elective grace is surely operating in their hearts, and therefore they will embrace Christ and be received by him into glory. This is not the only example of Tiessen’s logic leading him into speculation; too far, some might think, from what a purely biblical approach should allow.

Nevertheless Tiessen remains a convinced monergist, believing that everything happens because God decrees it. The alternative of synergism—that history is a mixture of the human and the divine—is rejected, even though Tiessen insists that all religions, including Christianity, are ambiguous. His argument is supported by a critical realist approach to what we know of how God works, which moves him beyond a strict exclusivism to an open, self-critical, humble and dialogical approach to religions. In so doing he finds himself engaging sympathetically with theologians like Clark Pinnock. Lesslie Newbigin, and Christopher Wright.

For evangelicals this book has set a new benchmark for a compassionate, biblical theology of salvation with a human face. It meets those like Amos Yong, who are saying similar things from a Pentecostal direction. It moves away from uncompromising exclusivism without compromising the urgency of mission. You may not agree with everything, especially if you have Arminian sensibilities, and given the diversity of evangelicalism, a consensus seems optimistic. But for me this is a significant step in the right direction.