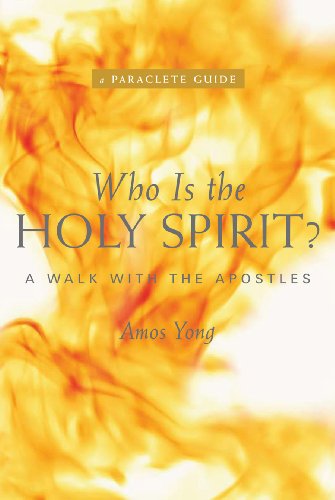 Who Is the Holy Spirit? A Walk with the Apostles

Though the title and back-cover summary may suggest that this is a general introduction to the role of the Spirit in Scripture and the world today, it soon becomes clear in reading Amos Yong’s contribution to Paraclete Press’s “Paraclete Guides” that his agenda is far more specific. In the introduction Yong signals his approach. Convinced from personal experience that many Christians’ view of the work of the Holy Spirit is “too individualistic, too spiritualistic, and too ecclesiocentric,” he sets as his task a rereading of Luke-Acts with a view to uncover the work of the Spirit “not just at the level of the individual but also at the level of society and its various political and economic structures” (pp. ix–x). He notes that since the events of Luke-Acts took place in the context of the Roman Empire there is an unavoidable political dimension to what they recount. His concerns are social, political, economic, and global.

In practice, Yong’s reading begins with episodes in Acts and then looks back to the Gospel of Luke to see how these developments in the early life of the church fulfilled movements and themes initiated in the ministry of Jesus. Thus the paired chapters create a sort of diptych of Jesus and the early church, a technique that the author of Luke-Acts himself uses to great effect. The narrative of Acts forms the backbone of the book, and Yong provides further organization by dividing the story into seven sections, largely based off of the geographical trajectory of the spread of the Gospel.

In these paired chapters Yong’s approach is to do a surface rereading of an Acts narrative through the socio-political lens and summarize what he sees to be role of the Spirit in the early church’s experience. He then turns to the Gospel of Luke to look for evidence of similar themes in the ministry and teaching of Jesus. Most chapters conclude with mild exhortations for the church today to rediscover this movement of the Spirit. Many of these exhortations are too general to be of much specific value.

As is so often the case when Scripture is subjected to reading through a particular lens, such as Yong’s socio-political reading, texts get pressed in directions that seem unlikely. In examining Jesus’s resuscitation of the son of the woman of Nain, Yong rightly underscores that resurrection in Jewish thought involved far more than the reinvigoration of dead bodies. Accordingly, Yong suggests that the restoration of this young man’s life meant the “resurrection” of his mother in restoring her social status, her livelihood, and her political representation. In an effort to discover in this more profound socio-political significance, however, Yong later suggests that the resuscitation also “return[ed] another healthy body desperately needed for the peasant economy of Nain.” While many will read that as a stretch of the text’s interests, Yong’s later summary that “Jesus’ raising the widow’s young man resulted in the renewal of the town of Nain” surely goes beyond textual warrant. Several similar examples could be adduced.

Not surprisingly Yong similarly makes claims beyond what the text warrants with regard to the role of women in the early church in claiming that Tabitha and Lydia provided “matriarchal leadership” in their home towns. While he reads this as evidence of the Spirit’s demolition of cultural patterns, he concludes that this reordering of the status quo has only partially been fulfilled. Here he plays Acts and the Gospels off one another suggesting that the relatively minor contribution of women in Acts falls short of the significant role Jesus intended for them and therefore reveals that “the inertia and forces of patriarchy appear to have regained the upper hand after the death of Jesus even among the disciples and have largely succeeded in maintaining the hierarchical division between male and female since” (p. 148). He calls for a “new Pentecost” in which the prophecy of Joel is truly fulfilled. On other topics Yong is similarly provocative though at times less specific in his critique, e.g., substitutionary atonement, the role of the Spirit in world religions, and medical intervention. These are important issues that deserve more nuance than they receive.

Yong’s writing is clear and simple. There are a few places where Yong very ably and succinctly summarizes the significance of the coming of the kingdom and the fulfillment of Jewish expectation in the life and ministry of Jesus. He works hard not to excise the ministry of Jesus and the Spirit from the historical and canonical context. Unfortunately, these passages are a small portion of the whole.

This is not a work that is likely to convince those that do not already share Yong’s approach to Pneumatology or to Scripture. Those who prefer to theologize from epistolary literature will not find Yong’s conclusions from Acts sufficient or convincing. For those who do share his preferences, the book will doubtless offer several inspiring exhortations. The writing style and accompanying study guide suggest that this work is targeted for use in a church educational setting. However, its approach to Luke-Acts is not likely to be embraced by much of the readership of this journal. While Yong may be right that our understanding of the work of the Spirit is too provincial, his proposed rereading, brimming contemporary buzzwords, seems to reveal more about the spirit of the age rather than the Spirit of the Apostles.