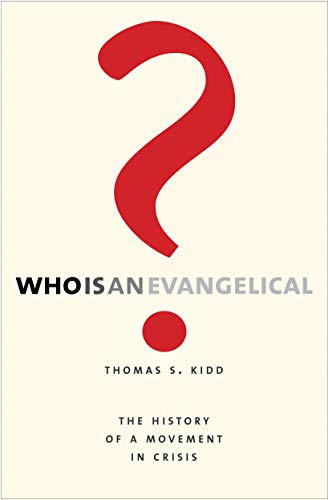 Who Is an Evangelical?: The History of a Movement in Crisis

These are interesting days for evangelicals. Intense debates about theological issues, cultural winds, and political realities abound. Emotions run deep. One question has perennially challenged the movement, and it continues to be debated today: just what does it actually mean to be an evangelical? Answering this question will aid in other swirling discussions.

In Who Is an Evangelical?: The History of a Movement in Crisis, Thomas S. Kidd offers his answer. Kidd, the James Vardaman Distinguished Professor of History at Baylor University and Distinguished Visiting Professor of Church History at Midwestern Baptist Theological Seminary, argues that the modern conception of evangelicalism represents a deviation from the spiritual center that has historically defined the movement. According to Kidd, certain novel characteristics—Republican, white, 81%—have become synonymous with evangelicalism as a whole. For those interested in the past, present, and future of the movement, this state of affairs poses a problem, for it distorts evangelicalism’s rich theological and historical DNA.

Kidd chronicles how the movement arrived at this place. He begins in eighteenth-century America and argues that, “at the outset, evangelicalism was basically a spiritual movement” of the born again (p. 26). It was multi-ethnic and socio-economically diverse. Their high view of the Bible, conversion-oriented ministries, and dependence on the Spirit took precedence over political aims. While never uninterested in politics, they were concerned with weightier eternal matters.

As they grew, their political interest increased. Eventually, the singular issue of slavery took center stage. Abolition was a “notable instance of black and white evangelicals entering the public square on behalf of oppressed people” (p. 49). Though many evangelicals opposed slavery, others (primarily white southerners and some northerners) either embraced the institution or remained passive and refused to comment (p. 49).

Kidd then explores the fundamentalist-modernist controversy. He sees the Scopes Trial as a harbinger of the contemporary evangelical crisis because of the “media access, establishment politics, and celebrity politicians” at play both then and now (p. 73). While white evangelicals were quite vocal during this controversy, they remained relatively silent on evils such as lynching. They became selectively political, and at times used spirituality as an excuse for their silence (p. 66).

Moving into the 1960s and 1970s, evangelicals welcomed a landmark development that would become significant for the present situation: media attention (p. 118). Kidd argues that “evangelical leaders enjoyed the increased media attention, but they failed to recognize that they were losing control of the public’s perception of their movement” (p. 118). The evening news is not a nuanced vehicle of communication, and the constraints of print and television led evangelicals to be identified with merely their “political behavior” (p. 118).

In the years from Reagan to Obama (ch. 6), evangelical affiliation with conservative politics increased. Evangelicalism ironically both grew and shrank—it grew in diversity but shrank in semantic range. By 2016, “white evangelicals who quixotically sought power in the GOP had come to represent evangelicalism itself for much of the American public” (p. 142).

Who Is an Evangelical? is an outstanding contribution from one of today’s premier historians. Kidd captures American evangelicalism’s past and connects the dots to their present. He highlights the influences—both internal (passivity to the oppressed, lust for cultural prestige) and external (media)—that have led to their contemporary situation.

Kidd refuses to paint conservative whites as the “normal” evangelicals (p. 4). He emphasizes the contributions of various ethnicities to the evangelical story. While some historical accounts limit their interaction with diverse evangelical traditions, Kidd broadens the scope and, in doing so, challenges the assumption that white leaders and majority white institutions represent the most important elements of evangelicalism.

As a historian, Kidd primarily looks backward and does not offer neat, packaged answers for the future. However, while he offers few explicit ways forward, implicit ones dot nearly every page. These are mainly focused on evangelicalism returning to its spiritual center, the need for evangelicals to be known for their mercy and message through word and deed (rather than being defined by outside agencies), and an embrace of a broad coalition of various ethnicities united around the gospel.

Kidd aims his book at journalists, pastors, politicos, and rank-and-file evangelicals (p. 3). The introductory nature might lead scholars to wonder “Well, what about X?” This is not a weakness but instead demonstrates the challenge of capturing a complex movement in a 150-page primer, which Kidd does well.

Kidd’s subtitle, “The History of a Movement in Crisis,” represents the animating concern of his book. Evangelicals face a variety of challenges, but Kidd focuses on one of identity. He believes that some evangelicals have drifted from their spiritual heritage toward a haven of political power that promised prestige but has ultimately hampered the movement’s witness. Kidd’s aversion to this development is discernable, but he is respectful in his evaluation of those who might disagree with his interpretation. He recognizes that faithful evangelicals can and will come to different conclusions. His rub is not that evangelicals are engaged in politics; it is rather the prioritizing of the political over the spiritual.

It matters that evangelicals be aware of both the historic and current connotations of their nomenclature. It has direct bearing on relevant questions: Will we be cornered into a myopic usage of the term “evangelical”? Or will we be known first and foremost for the evangel and the command to love God and neighbor while drawing on the riches of the evangelical tradition? Kidd hopes for the latter, and his volume offers evangelicals a view of their past in order to reclaim their strengths into the future.