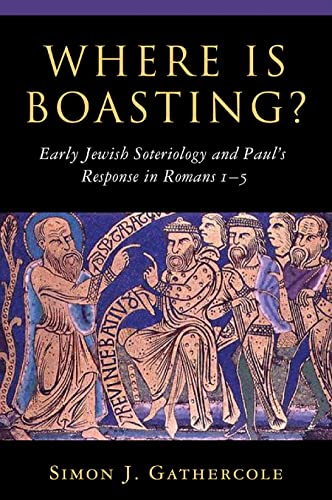 WHERE IS BOASTING? EARLY JEWISH SOTERIOLOGY AND PAUL’S RESPONSE IN ROMANS 1–5

As the ‘new perspective’ on Paul ages, the challenges to it mount. Gathercole’s study, a Durham dissertation written under James Dunn, is a fresh and formidable representative of this recent body of studies. The monograph also fills the remarkable gap in the last decades on the topic of ‘boasting’ in Paul’s thought. Here Gathercole’s attention is necessarily focussed upon Romans 1–5, as he addresses questions raised by the ‘new perspective’. The discussion of Romans is preceded by a broad investigation of the salvific significance assigned to ‘works’ and ‘obedience’ in literature which can be assigned with relative certainty to Second Temple Judaism. Gathercole supplements this work with a brief assessment of post-70 CE writings. Many of his observations on these texts are acute and helpful correctives to the way in which the same materials have been read by proponents of the ‘new perspective’. The basic thrust of his study is that the literature shows that Paul’s Jewish contemporaries were quite willing to speak not only of the grace of Israel’s election, but also of the necessity of obedience for salvation at the final judgement. E. P. Sanders’ paradigm of ‘getting in’ and ‘staying in’ overlooks the significance assigned to obedience as a prerequisite for final salvation in the early Jewish literature. Correspondingly, as Romans 2 shows, Paul’s criticism of Jewish ‘boasting’ was not merely directed against national privilege. It also challenged the confidence of Jews in their obedience, a confidence which was not so much a conscious self-trust as a false estimation of their standing before God. Hence the indictment of Romans 3:9–20. It is not that Paul rejected the idea that obedience was necessary for salvation. He differed from his contemporaries in his understanding that right standing with God and the empowering gift of the Spirit were essential prerequisites to facing final judgement.

There are many aspects of the study to be appreciated, not least of which is Gathercole’s recognition that ‘boasting’ involves not only a claim before God, but also one over against other human beings. Here Gathercole overcomes difficulties with both Bultmann and ‘the new perspective’, and opens the door to seeing the broader relevance of ‘boasting’ in the thought of the apostle who was ‘not ashamed of the Gospel’.

His decision to exclude the rabbinic literature form a central place in his investigation reflects an old debate as to how the pseudepigraphic literature (where the necessity of obedience is often emphatic) is to be correlated with rabbinic thought. In my judgement, he is overly cautious in his minimal use of rabbinic tradition for the pre-70 CE period. But this question is a large one, which has yet to be addressed adequately. Gathercole can hardly be expected to solve all problems at once.

His construal of Paul’s soteriology is somewhat more problematic. He is undoubtedly right in his conclusion that Paul regards obedience as necessary for salvation at the final judgement. Romans 2 as well as other passages in Paul support this conclusion. The difficulty lies in his construal of ‘the justification of the ungodly’ as the initial stage in a divine work which is followed by the work of the Spirit which enables us to stand at judgement. The event of justification appears to bear an unmistakable eschatological character for Paul (e.g. Rom. 3:21; Rom. 4:25). And while Gathercole undoubtedly would not want to follow a Tridentine understanding of justification, his interpretation of Paul is susceptible to such a reading. In this connection, we may observe (pace Gathercole, who claims otherwise) that the necessity of good works long has been a matter of concern and debate within Lutheran theology, and finds explicit expression in the Formula of Concord. Indeed, it is arguable that Luther’s first-commandment based understanding of faith as obedience supplies a resolution for the difficulty which Gathercole’s work faces.