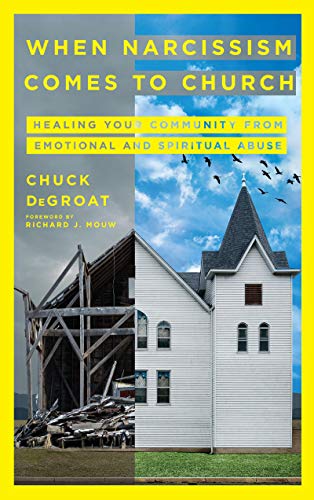 When Narcissism Comes to Church: Healing Your Community from Emotional and Spiritual Abuse

Occasionally, a book is published that is “for such a time as this.” This often happens when a crisis or something about the current cultural moment invites deep reflection on a particular topic. In this moment, Chuck DeGroat has written a manifesto for our age: When Narcissism Comes to Church: Healing Your Community from Emotional and Spiritual Abuse. In this important work, DeGroat provides a lucid and sobering tale of what happens when narcissism invades communities of faith. Written both from personal experience and academic research, this work is one that faith leaders would do well to consult as the world faces a crisis of narcissistic leadership, both inside and outside the church.

The problem with labels is that they often get thrown around haphazardly. Such is the case with the key term in the book’s title: narcissism. In fact, DeGroat notes that the use of the term greatly increased “during the 2016 election cycle, when Donald J. Trump found himself in the crosshairs of both amateur and professional diagnosticians” (p. 3). This work, though terse, explores what narcissism is, how it is manifesting in our current cultural moment, and a way forward for both narcissistic systems and leaders. DeGroat approaches the subject with both honesty and compassion: honesty in that he does not shy away from raw descriptions of narcissistic tendencies found in some individuals; compassion in that behind every narcissist is a heart full of shame, fear, and isolation.

In chapter 1, DeGroat argues that narcissistic tendencies show up in churches because many ordinary Christians and pastors live deceitfully by hiding behind a spiritual mask, which is important because “hiddenness is the breeding ground for narcissism” (p. 16). In particular, Christian ministry can be a magnet for narcissistic personalities, for “who else would want to speak on behalf of God every week?” (p. 19). Driven out of insecurity and anxiety, pastors of both large and small churches, begin to see themselves not as humble shepherds of God’s people, but of God’s human agent of proclamation. In chapter 2, DeGroat invites us into the ongoing conversation between psychologists and clinicians who are attempting to decipher the criteria for narcissistic tendencies. Many symptoms, coming from the DSM-V, would not be unfamiliar to many Westerners: grandiosity, attention seeking, and impairment of empathy and intimacy. Though the DSM-V is helpful, DeGroat argues that narcissism “exists along a spectrum from healthy to toxic” (p. 36). In chapter 3, and in a unique way, DeGroat introduces the “nine faces of narcissism,” which are the specific ways narcissism manifests in each of the Enneagram types.

In chapter 4, DeGroat brings the conversation from the clinical perspective to the ekklesia, as he discusses two words that seem totally incongruent: narcissistic pastor. Expounding Ezekiel 34:1–4, DeGroat argues that narcissistic pastors are those that fundamentally profit from the sheep rather than serve the sheep. This chapter includes a detailed list of the ways that narcissism manifests itself in the life of a pastor. For those who have sat under narcissistic and authoritative leadership, this list of behaviors will not be unfamiliar. In chapter 5, DeGroat explores the inner world of the narcissist’s operating system. What drives a pastor towards narcissistic behaviors? DeGroat’s answer is summarized in two words: rage and shame. In chapters 6 and 7, DeGroat then helps us to see the problem of narcissistic systems that enable certain pastors to flourish and the problem of gaslighting within these systems. Lastly, chapters 8 and 9 focus on the way forward for healing, both personally and corporately—for those that have been hurt, for the narcissist, and for churches.

As I mentioned earlier, this is a book written for our times. While narcissistic leaders have been around since Genesis 3, one wonders if DeGroat’s book would have been as popular one hundred years ago. This speaks to both the necessity of DeGroat’s work and the contextual nature of it. This book gives language to many of the abusive, domineering, and narcissistic traits we have seen displayed in the public square of late. As you read this work, you get the sense that you are speaking to a chaplain in the Army who has felt the devastating effects of war both on himself and the soldiers he has served. DeGroat does not write as a pontificating philosopher but as someone who has had close contact with narcissistic pastors, both personally and clinically.

The strength of DeGroat’s work is the compassion that pervades the book. When considering the nature of the work, I presumed I would meet a man who has a lot of judgment against narcissistic pastors; what I found was the exact opposite. DeGroat exudes both compassion and curiosity as he longs to discover why people lash out in narcissistic tendencies. Written with severe honesty, you can tell that DeGroat has sat with dozens of men and women, inviting them to discover God’s grace afresh, even when they are stuck in their narcissistic sin patterns. DeGroat’s posture is a welcome dose of kindness in a world full of outrage.

While not a problem for me personally, for Christians who are cautious about integrating secular counseling theories and psychological insights with biblical teaching, this book may leave some perturbed. As licensed therapist, who holds a PhD in psychology, DeGroat has no qualms about integrating non-Christians sources into his approach, while filtering everything through a biblical and theological worldview. However, in my view, he not only successfully “spoils the Egyptians” but ensures that psychology is interpreted in the light of Scripture, rather than the other way around.

This is a timely book for our generation of Christians struggling with the influx of narcissistic pastors. Young pastors, who may be overly influenced by megachurches and social media trends, would be wise to heed the wisdom of this book. For as an even wiser author has written, “Pride goes before destruction and a haughty spirit before a fall” (Prov 16:18).