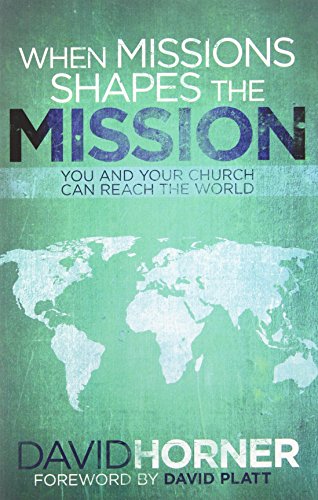 When Missions Shapes the Mission: How You and Your Church Can Reach the World

When Missions Shapes the Mission argues there is a gap between the biblical mission of the church and the average missions program in evangelical churches. Opening with the question, “Why are more churches not engaged in a more practical and substantial way in taking the gospel to the nations?” (p. 1), Horner then identifies the current state of missions in evangelical churches, demonstrates the biblical understanding of missions, and describes the best practices used to build a robust missions program.

Horner’s first section, “Where We Are,” begins with the differentiation between mission, missional, and missions, rightly arguing that a church can be missional but miss God’s aim in missions. Key to understanding the book is the author’s definition of missions: “Missions is God’s plan for reaching all the nations with the good news of Jesus Christ by sending His people to tell them and show them the gracious, redeeming love of a glorious God” (p. 6). As the book unfolds it becomes clear that Horner defines nations as people groups rather than nation-states.

Although the author makes sweeping statements about the neglect of missions in churches across America, he cites data only from the Southern Baptists, which is understandable since he has been a pastor in that denomination since 1978. Although I suspect the broader claim holds, he disappointingly leaves that assertion unsubstantiated. Of the data he gives regarding the Southern Baptist Cooperative Program, two of the most remarkable are that (1) less than 20 cents of every US dollar given goes to international missions and (2) 80% of churches have never sent a missionary from their own congregation.

After looking at the lack of financial support and sending missionaries from our own congregations, Horner addresses the roadblocks churches face in being committed to missions. Why don’t churches have a robust, strategic and comprehensive missions program? According to Horner, the main reason is “that the missions direction of our churches rises and falls through the leadership of the pastor” (p. 29). Unfortunately, he does not identify practical ways to influence church leadership or to change church culture.

Central to the argument in chapter three, “Missing the Point,” is the necessity of going as part of the Great Commission. Horner cites NT professor Roy Ciampa, who demonstrates that the participle translated “go” still carries the mood of the main verb “make disciples.” Those who have asserted a lack of imperative concerning the need to go miss the point of the Great Commission. How will every ethne have the gospel unless we go ourselves or send others? The author contends, “You cannot and will not be effective in obeying the Great Commission if your disciple-making efforts remain limited to where you find yourself ‘as you go’ through your normal walk of life” (p. 47).

In Section 2, “Where We Want to Be,” the author starts in Genesis and briefly rehearses God’s plan to redeem some from all nations. However, to simply believe this is not enough, due to additional roadblocks churches face in becoming strategic about the task remaining.

Crucial to transforming a church’s mission program are the nine values from past missions models listed at the beginning of chapter six. He calls the first four foundational because they will transform the perspective of any church that lives them out. These values are:

The final five values, Horner claims, are the natural result of living out the first four in community. They include:

Horner maintains that implementing these nine values will “shape the heartbeat of that congregation” that lives them out (p. 134). However, he undermines this statement by saying that not all churches with a healthy missions focus possess all these values. Horner then adds more confusion when he states, “nor is it reasonable to think that they should” (p. 134). But which of these biblical values would a church ignore or reject? Even though the final value of persecution may sound odd, it is entirely biblical to both expect opposition and not let persecution stop us from taking the gospel to the difficult places.

The list of top mission practices, which begins the “How to Get There” section, are distilled from over 100 church responses to his survey aiming to identify the most helpful missions practices of a variety of churches. These practices are grouped into three basic categories: vision building, strategy creation, and ongoing development. Horner compares the survey results to the previous nine values and then expresses surprise when the list is populated with practices and not values. Had the author surveyed the values rather than practices alone, he could have built a stronger argument for the adoption of those values.

Horner correctly identifies pragmatism as a problem for the church today. The best-practices approach is much easier to implement than the heavy lifting required to change the core values of a congregation. The reader may also be tempted to take the expedient route and build a church missions plan based primarily around the best practices. Yet church leaders and missions teams should follow Horner’s sequence by building a biblical basis for missions, committing explicitly to specific values, and only then begin to implement specific best practices.