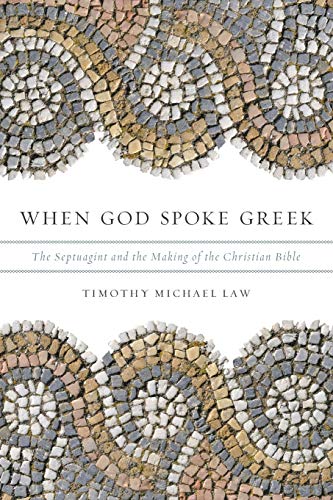 When God Spoke Greek: The Septuagint and the Making of the Christian Bible

A careful reading of this book is like sorting through the fruits after harvest, keeping the good ones and discarding the overripe ones. Law begins his presentation with four reasons why this book is relevant (pp. 4-6): first, “the Septuagint sheds light on the development of Jewish thought,” which is essential for understanding the NT; second, the NT authors use the Septuagint more often than the Hebrew Bible; third, the theology of the early church was shaped and derived from the Septuagint; and fourth, the Septuagint is an important witness to an alternative Hebrew text that was at times older than the MT.

In chapter two, Law provides the historical background to explain how Koine Greek became the lingua franca of the Hellenistic era. In chapter three, by analyzing the form of Hebrew biblical texts found at Qumran and its surrounding areas, Law shows that there were multiple Hebrew text forms in circulation between the third century BCE and the second century CE. In addition, some texts in the Septuagint whose readings differ from the MT agree with a few of the Hebrew text forms found at Qumran. In chapter four, Law discusses how the author of the Letter of Aristeas sought to justify the use of the Septuagint as Scripture from both Greek and Jewish perspectives, even though the translation differed from the Hebrew texts in some ways. He also demonstrates that an Egyptian provenance in Alexandria for the Septuagint is the most plausible and that the majority of the Septuagint was translated by the second century BCE.

Chapter five notes some important differences between the text of the Septuagint and the Hebrew Bible (HB). Law notes that the translation tended to become more literal towards the end of the translation period. Chapter six describes the other books (later known as the “apocrypha”) that were included in the Septuagint but later excluded from the canonical HB. Chapter seven discusses the revisions of the Septuagint between the second century BCE and first century CE. Law proposes that these revisions were probably reactions to the phenomenon of multiple divergent text forms (both Greek and Hebrew), so as to bring the translation nearer to the Hebrew text form that was later received by the Masoretes.

Law discusses the relationship between the Septuagint and the NT in chapters eight and nine. Chapter eight lists examples of how the NT reflects the language and theology of the Septuagint (e.g., διαθήκη, εὐαγγέλιον, κύριος). Chapter nine probes how the explicit citations of the OT in the NT frequently come from the Septuagint, rather than the HB, and that the wording of the Septuagint, when different from the Hebrew, was sometimes more suitable for the purposes of the NT authors.

From chapters ten through thirteen, Law describes how the Septuagint was the Bible of the Christian church from the time of the apostolic fathers until Augustine and Jerome, with the only exception being the Syriac church at Edessa. In chapter ten, Law outlines how the early church fathers based their arguments on the distinctive wording of the Septuagint in their arguments against Jewish and pagan opponents. Law also opines that the Christian OT canon remained fluid (though with a core) until the Reformation. In chapter eleven, Law gives examples of patristic exegesis and theology based on the Septuagint and explores how the Septuagint became the basis for God’s Word in other languages when Christian missionaries translated it between the second and tenth centuries CE.

Chapters twelve and thirteen focus on the factors leading to the decline of the Septuagint in the early church. Law reckons that Origen’s work on the Hexapla and his concern to build his arguments on scriptural texts that Jews would accept led later Christians, though unintentionally, to favor the HB. Eusebius of Caesarea later popularized Origen’s Hexaplaric Septuagint text. However, Jerome was the key person in the Western church to advocate the HB’s priority over the Septuagint through his Latin translation of the HB and his debate with Augustine. Eventually, it was “in the rise of Christian Hebraism in the Renaissance . . . [and] theories that privilege the Hebrew language in itself, which became a crucial component in the eventual triumph of the Hebrew Bible over the Septuagint in the church” (p. 162).

On the one hand, the “good” fruits: Law explicates clearly the various factors contributing to certain historical events and trends related to the Septuagint. While many scholars have written about the formation of the Septuagint and its importance for studying the NT, relatively few have written about its significance for the exegesis and theology of the early church. Therefore, Law has made a notable contribution in this respect. To some extent, Law has demonstrated the importance of studying the Septuagint in order to understand the theology of the NT authors and the early church fathers.

On the other hand, I note two “overripe” fruits. First, Law overstates the diversity of the various Hebrew text forms. He writes, “The view of a continuum with ‘scripture’ on one end and ‘rewritten’ works on the other should be abandoned. Instead, we now realize that there were books that sit all along the virtual continuum” (p. 27). While the examples that Law cites may show that the Hebrew Vorlagen of the Samaritan Pentateuch and the Septuagint agree with a few of the Qumran manuscripts, it remains unclear whether all the “4QReworked Pentateuch” manuscripts, for example, have authoritative status as Scripture, although they certainly reflect the history of interpretation of these texts. Furthermore, there are still major differences between the “Reworked Pentateuch” compared with other “rewritten” works such as the Temple Scroll and the book of Jubilees.

Second, while the Qumran manuscripts show multiple Scripture traditions for certain parts of some books, they also show how well the MT preserves most of the earlier tradition of the HB. Although Law is correct to show examples where the LXX may have followed an alternate Hebrew text form (see ch. 5 for examples), it is also important to keep in mind that the majority of the LXX is still based on a textual tradition quite similar to the MT. These similarities need to be emphasized so that the differences between the traditions do not become exaggerated. Third, Law should have acknowledged that this title was not original to him since Karen Jobes had published an earlier article entitled, “When God Spoke Greek: The Place of the Greek Bible in Evangelical Scholarship” (BBR 26 [2006]: 219-36).

Nonetheless, on the whole, Law has written a clear historical account of how the Septuagint became the authoritative OT Scripture of the early church.