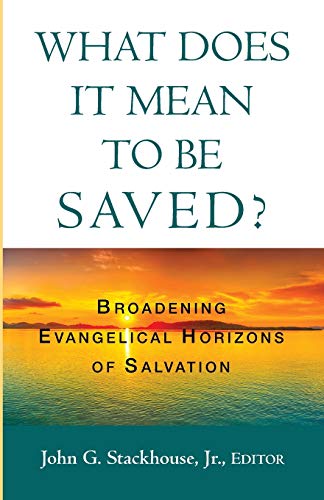 WHAT DOES IT MEAN TO BE SAVED?—BROADENING EVANGELICAL HORIZONS OF SALVATION

The contributors to this volume offer a variety of theological, exegetical, and historical studies. The collection has been written to challenge what the authors claim is a narrow view of salvation held by evangelicals, a view described by John Stackhouse as ‘spiritual individualism that is little better than Gnosticism’ (10). Stackhouse suggest that to remedy this misconception evangelicals ‘could make an important start simply by teaching that salvation is not about “Christians going to heaven!” Salvation is about God redeeming the whole earth’ (10). The contributors appeal to evangelicals to broaden their view of salvation to encompass the breadth, depth, and splendour of God’s salvation.

The first part of the book is comprised of three essays dealing with some ‘basic reconsiderations’ of the theology of salvation. Rikk Watts’ Biblical—Theological study argues that ‘the central thrust of to the concept of salvation … must include at or near its center the idea of the new exodus/new creational restoration of our embodied humanity as the image of God and concomitant upon that the restoration of this creation in which God has placed us’ (15). Bruce Hindmarsh’s historical study suggests that early evangelicalism (which he defines as early 18th century) viewed salvation as encompassing concerns much broader than the saving of individual souls. Using the Soteriology of John Wesley as a representative example he argues that salvation in this period was seen as including concerns for the welfare of the poor, the health of the sick, societal transformation, the wider church and ‘the full and final salvation’ of the believer (47).

Henri Blocher’s characteristically lucid contribution considers the atonement as ‘victory and vicarious punishment’ (67). This chapter is of particular relevance to contemporary evangelicalism as he clearly argues that ‘Preaching salvation as wrought, full and complete by the punishment Christ underwent vicariously on our behalf, has been the hallmark of evangelicalism for several centuries (68). He ably demonstrates that Christus Victor and Penal Substitution are not mutually exclusive but the Christus Victor is subordinate to Penal Substitution (69). Christus Victor concerns the effect of the atonement, rather than understanding what objectively took place at Calvary (78, 89).

The four essays in the Second Part of the book explore what the evangelical understanding of salvation can contribute to a wide range of issues such as race (Vincent Bacote), class (Amy Sherman) and gender (Cherith Fee Nordling). These offer some useful insights, for example, the simultaneous emphasis on salvation as an eschatological promise and as a contemporary reality. This includes, as Nordling rightly argues. our humanity. We are not save as disembodied beings; but as complete humans. However, the usefulness of these essays is limited by the paucity of exegetical material.

The third section of the book is comprised of responses by John Webster and Jonathan Wilson. Webster notes how the term ‘salvation’ is used in a variety of ways by the essayists, and often very loosely ‘referring partly to the divine economy of reconciliation, partly to the Son’s atoning work, partly to the state of reconciliation between God and humankind to which we are restored, partly to the human failure’ (181). Webster rightly observes the problems associated with such ill-definition, asking ‘Can the broad reference of “salvation” be sustained without in some measure drawing attention away from the utterly unique and gratuitous character of God’s saving work, willed by the Father, effected by the Son’s obedience to the Father’s will, and realized both now and in the future by the promise of the Holy Spirit’ (182). A further weakness is also identified by Webster, who points out that with the exception of Blocher, none of the contributors offer a ‘sustained exposition of the dogmatics of salvation nor of the biblical testimony that dogmatics serves’ (182).

Despite these weaknesses, the current reviewer considers the book offers some helpful contributions, particularly the brilliant contribution by Blocher—it is worth buying the book for this essay alone.