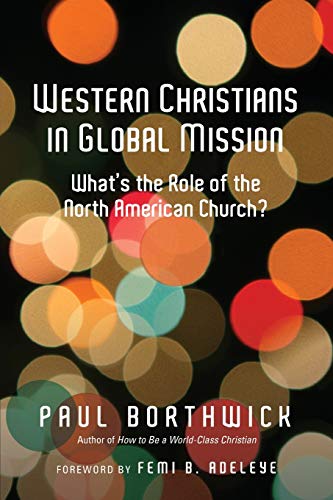 Western Christians in Global Mission: What’s the Role of the North American Church?

Paul Borthwick has a laudable agenda: he wants to demonstrate that the worldwide church, and the role of North Americans in it, is very different from the perceptions of many of his compatriots. To do this he distils the writings of significant scholars, gathers commentary from insightful church leaders around the globe, and tells stories of his own experiences. He presents his material in a punchy and accessible manner with questions for discussion at the end of each chapter and with references that encourage further reading. Borthwick has been changed by his relationships with Christians in the global south, and he writes to transform the attitudes of others.

He wants to persuade most of his readership that there are mature churches with their own missionary approaches in places some erroneously still consider unevangelised and in need of North American intervention. For those readers who are already critical of North American involvement in global mission, he wishes to show a way forward that does not shy away from engagement but does so in a humble and collaborative way. For example, he is straightforwardly critical of forms of mission tourism that jet-set into a country for two weeks for a particular program but avoid developing deep relationships with local Christians. He calls for mission under the authority of the local church, one which is relational rather than task-oriented.

Borthwick appraises the contemporary churches of North America and the Majority World in part one, entitled 'Where are we now?' In part two, 'Moving Forward,' he first examines the biblical mandate for mission, before exploring in the next six chapters the importance of humility, reciprocity, sacrifice, equality in partnership, and listening to those of the majority world. He identifies the positive characteristics, like optimism, that North Americans bring to mission as well as critiquing attitudes of activism and superiority. The ultimate aim is summed up in the title of the final chapter 'United Together-So That the World Might Know'; Christians across the globe should work together in mission as a witness to the world.

The approach, while welcome, does not go far enough. For this British reviewer the gung-ho tone of the book does little to reinforce the message of humility and attentiveness-but maybe that is an issue of differing cultural communication! More serious is the dismissal of the views of others without proper examination, most clearly evidenced in the assumption that anything but an exclusivist position on other faiths simply should not be tolerated, rather than an enquiry as to how and why alternative views had been reached. Where is the humility and listening here? Issues of power are also inadequately tackled: Borthwick acknowledges the inequality of the world and its influence on forms of missional activity but he does little to address the largely Western systems that maintain it. Global mission as advocacy of fairer international structures is mentioned only in a couple of anecdotes yet the lack of reciprocity and equality and the attitudes that go with it appear central to his theme and significantly impact on mission strategies. There is little mention of the environmental impact of the global mission he suggests.

Borthwick's biblical basis for mission focuses mainly on the Great Commission and John 3:16 rather than situating them within a missionary hermeneutic of the entire Bible. Comprehending the pervasive influence of societal structures and interpreting the whole Bible as a demonstration of the many ways of God's loving sending forth into the world seem fundamental to a proper sense of the divine mission in which we are called to participate. There is therefore room for greater reflection on the important issues that this book raises which would serve to strengthen our witness to Christ in the world, whether we cross geographical frontiers or not.