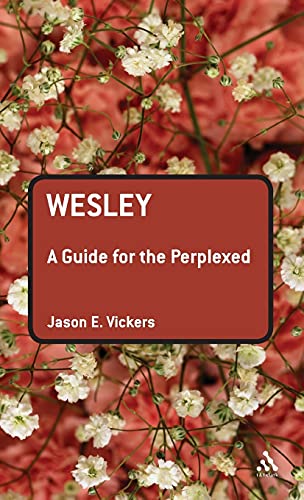 Wesley: A Guide for the Perplexed

It may seem surprising to find a book on John Wesley as part of a series aimed at the perplexed reader. After all, the author himself introduces Wesley as someone who “purposely wrote in the most straightforward English prose. Moreover, he steered clear of technical, philosophical or otherwise perplexing language” (p. 1). Vickers suggests three reasons that the life and thought of the eighteenth Century Evangelist and founder of the Methodist movement may be perplexing.

First, Wesley claimed to be fully committed to the Church of England, and yet his actions seemed to precipitate the creation of a new denomination, not least his ordaining of Methodist clergymen to serve in America. This has led some to suggest that “despite his insistence that he spoke ‘plain truth for plain people’ … Wesley’s words should not be taken at face value” (p. 2).

Second, scholars are polarised between those who regard Wesley as “a progressive figure … adapting Christianity to the modern age” and those who see him as a “reactionary figure who was determined to turn back the clock” (p. 2).

Third, there appears to be a mismatch between Wesley’s own self-identification as a “High Church Tory” (p. 2) and his commitment to politically progressive ideas such as constitutional rights and the emancipation of slaves.

Vickers proposes to resolve these dilemmas as follows. The first two might be resolved by observing that Wesley was simply a man of his time. He was a Trinitarian theologian with a strong commitment to a confessional state, making him typically Anglican. Vickers believes that the schism between Wesley and the Church of England has been overplayed, noting that he was never formally expelled from the Church. Wesley was able to justify his action in creating American clergy on the basis that they were serving outside of Great Britain where the Anglican Church was locked into the confessional state.

Vickers then goes on to tackle the third dilemma by reference to Wesley’s theology as Trinitarian and Arminian. Wesley’s primary concern was with the economic Trinity—how God relates to us as opposed to how the persons of the Trinity relate to each other (the imminent Trinity). He saw a generous Father who took the initiative in sending his Son and the Spirit actively at work in the believer’s sanctification. Yet as an Arminian he emphasised that God’s free grace provided a place for people to respond freely. Vickers argues that this theological framework supported Wesley’s political framework where people had rights and freedoms within the context of a constitutional monarchy. Wesley is thus both progressive in his concern for these rights and freedoms and conservative in that he places them within the constitutional framework of the monarchy.

Vickers’ argument is both illuminating and persuasive. His decision to engage with Wesley’s ecclesiology and public theology provides a helpful corrective to pietistic trends within evangelicalism. Those looking for a hero of private, individualistic Christianity in Wesley should look again.

The final chapter does a useful job of explaining Wesley’s brand of Arminian theology and linking his doctrine of God, his pneumatology, and his soteriology to his understanding of the Christian life and public theology.

However, there are two important weaknesses in the book which I believe stem from the problem noted in our introduction (and his). I expected “a guide for the perplexed” to take a complex subject matter and then describe it and explain it in broad terms for somebody new to the subject matter. In my opinion, Vickers fails to do this, first, because of his selection and structuring of material. He focuses on a narrow aspect of Wesley’s thought (his ecclesiology and political thought) to the exclusion or marginalisation of other important aspects. This means that even though he does address the predestination-free grace controversy, it feels off-centre, left late in the book and there only to support discussion about other aspects of Wesley’s thought. It also means that other important areas, such as Wesley’s influence on hermeneutics (the so-called “Wesleyan Quadrilateral”) are neglected.

Second, after the first chapter, there is a failure to tie together effectively Wesley’s thinking with his biography. This seems strange for such an activist figure. Wesley’s theology was arguably shaped by his own conversion experience, his concern for the salvation of others, and what happened when he preached. His political views were often shaped by his encounters with others. Consider, for example, how his own encounter with slaves in Georgia and his reading of accounts of that barbaric trade led him to strongly oppose it in his writing.

These deficiencies are perhaps products of the problem identified at the outset (both by reviewer and author), namely, that Wesley is not generally regarded as perplexing. Perhaps his expectation is that most readers, having encountered Wesley at a popular level, need to have their simplistic understanding of him corrected. The result is that the book feels more like it is taking a straightforward topic and making it perplexing.

Vickers’s argument certainly has a place within Wesleyan studies., I would suggest, however, that it is better placed as a contribution to an advanced-level debate. What about those starting out in their discovery of Wesley? Ironically, I think Vickers would agree with me that the best place to start is with Wesley’s own writings: his journal and his sermons.