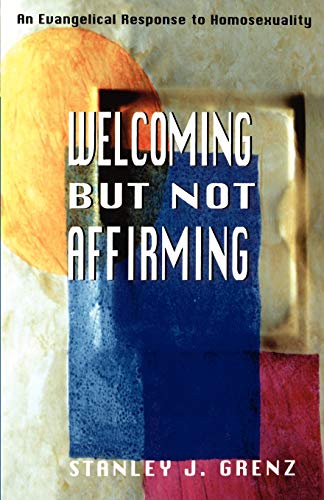 Welcoming But Not Affirming: An Evangelical Response to Homosexuality

The book, but not the title, is warmly welcome. The problem lies partly in the mismatch between title and sub-title. For the author, who professes theology and ethics in Carey/Regent College, Vancouver, wants to welcome not homosexuality but homosexual persons—a designation which he would in turn wish carefully to qualify and refine. In fact, this is first and foremost an ethical treatise, which pays only limited attention to pastoral and disciplinary issues—homosexuals in the Christian fellowship, that is. But Grenz is clear in regarding even a propensity to or preference for homoeroticism as in some sense an aspect of human fallenness: ‘our fallen disposition is sinful in that it is foundational to our sinning’ (120). He might have made more of this issue, because in most evangelical evaluations of homosexuality a distinction between orientation (or some such term) and behaviour is fundamental. But Grenz is cautious about assenting to ‘homosexual orientation’, preferring ‘sexual preference’. This is a point that evangelicals do well to ponder, partly because it is insufficient to stop at the sinfulness of homosexual behaviour without giving some theological-ethical evaluation of its predisposing condition (which we often seem more reluctant to offer), partly because acceptance of the notion of a homosexual orientation leads only too easily into a supposed fixed homosexual identity (which is highly problematic), and partly because public law and social policy can take note only of acts, even when they speak, for instance in anti-discrimination legislation, of orientation.

But even though Grenz does not here display the kind of robust theology of fall and original sin that might undergird a stronger analysis of homoeroticism as an aspect of humanity’s corporate disorder, his book is welcome as a carefully constructed, well informed and sympathetic discussion of this most intractable of divisive issues. It reaches consistently orthodox and biblical conclusions, in a work attentive to a good range of technical studies of the subject but still accessible to a serious general reader. Knowledge of Hebrew and Greek will be helpful but this is in no sense required.

Grenz repeatedly declines to take into account the side effects of the behaviour under review. This means that his book is more a contribution to personal than to social ethics. He has some interesting things to say about the difference between heterosexual intercourse, as limited by its nature to only two persons, and same-sex intercourse which lacks this limitation and hence cannot seriously gain privileged recognition as ‘monogamous’. This suggestion calls for more extended explication. I welcome his unambiguous declaration that marriage is by definition a union of male and female.

Grenz has been influenced by the constructivist explanation of the ‘making’ of homosexuality given by David F. Greenberg in The Construction of Homosexuality. Somewhat surprisingly he does not list recent evangelical writings from the UK—neither Atkinson nor Vasey, nor the St. Andrews Day Statement of Tim Bradshaw and others. But here is another valuable reaffirmation of a biblical sexual ethic. Out of respect for the English language, and in order to avoid contributing to the damaging consequences of the misuse of the verb, we do not affirm it.