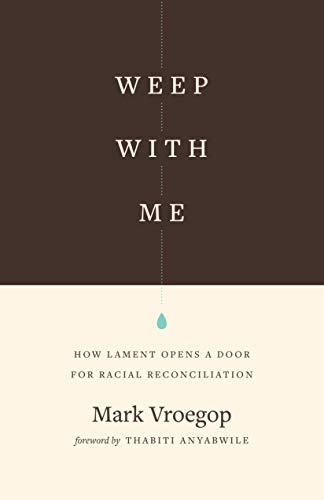 Weep with Me: How Lament Opens a Door for Racial Reconciliation

Weep with Me is a welcome invitation to become “fluent in lament” as a pathway to racial reconciliation (p. 22). It invites both “majority” and “minority” Christians (p. 33) to embrace lament as a necessary response to the harm and pain caused by racial division. Author Mark Vroegop states, “The aim of this book is to give the church a language that moves Christians of different ethnicities toward reconciliation” (p. 22). He concedes that “lament isn’t a silver bullet” (p. 181) to end such divisions, but it is a necessary, God-given way to begin.

Vroegop has arranged the book in three parts: Lament in the Bible and History; Lament and Majority Christians; and Lament and Minority Christians. In part 1, Vroegop sets a biblical foundation for his discussion, providing a definition of lament and an outline of its central features. He defines lament as “prayer in pain that leads to trust” (p. 37) which aims “to recommit oneself to hoping in God, believing his promises, and [to] a godly response to pain, suffering, and injustice.… Laments acknowledge the reality of pain while trust in God’s promises” (p. 37). Vroegop offers a four-step description of biblical lament: turn, complain, ask, trust (pp. 38–40, 150). He then locates lament in a five-step process of racial reconciliation: “love, listen, lament, learn, and leverage” (p. 41). Part 1 takes up the topic of “Listen” (ch. 2) and calls for majority Christians to listen and learn from African American spirituals. In this important chapter, Vroegop notes that the absence of lament in the church is a problem endemic to the “white evangelical church” (p. 48). He uses the example of “spirituals” not only to demonstrate the importance and power of biblical lament, but also to underscore several of its essential functions. Lament provides Christians with “a common language to talk about pain” (p. 48), permission to come to God with that pain, and permission to vocalize pain and complicated emotions (pp. 48–49). Lament also creates empathy (a point discussed in detail in later chapters), encouraging us to “weep with those who weep” (p. 49), and to remember the pain of the past (p. 50). The spirituals also guard against “moving quickly to solutions,” as they encourage the personalization of biblical laments in making them our own (p. 59).

Vroegop addresses majority Christians in part 2, where he commends corporate lament as a way to develop empathy. He comments, “We’ve turned a blind eye to our nation’s history, the church’s role in maintaining the status quo, and our minority brothers’ experience. With the advent of social media, the painful stories are receiving more attention—and validation. But without empathy on the part of the church, the divide will deepen” (p. 85). Vroegop maintains that weeping with those who weep is the first step. Immersion in biblical lament and the pain of minority Christians enables such tears (p. 86). He commends reading the lament psalms more regularly as we reflect upon the brokenness in our world and the fractures of racial division. He also encourages lament with minority Christians to create solidarity (p. 87) and, when done in public, to validate and share in their pain (pp. 89–90). Lament acknowledges brokenness, refuses to remain silent in the face of injustice, and seeks God’s help (pp. 102–4). Part 2 concludes with a helpful chapter discussing the appropriateness and limitations of personal remorse and repentance that majority Christians could consider.

Part 3 is directed to minority Christians. Here Vroegop highlights further features of lament and offers them as godly responses to racial oppression. He notes that lament is both protest and prophetic witness “against the brokenness of the world” (p. 143). He employs the category of exile to describe the experiences of minority Christians and states that “Lament humbly expresses the pain of exile, lovingly protests injustice—in whatever form it appears” (p. 143).

Vreogop writes as a pastor who has engaged his congregation in the process of racial reconciliation over many years. He draws upon personal and congregational experiences to illustrate his discussion. His tone is humble as he admits his own limitations and failings while delighting in some successes. He gently encourages his readers to consider what steps they need to take (both personally and corporately) to move toward the “heavenly vision of ethnic unity in Revelation 7” (p. 180). While the intended audiences of the book are minority and majority Christians in the United States, it has much to offer Christians beyond those borders, as the need for lament and racial reconciliation is universal.

The book is very accessible as Vroegop moves between biblical text and personal experiences. The discussion of the biblical text is naturally brief, yet it is sustained throughout the book offering helpful insights and ensuring key points are repeated. The book is also intentionally practical, providing steps and examples of how lament can effect personal transformation and racial reconciliation. Each chapter concludes with a guest contributor who shares a sample lament on the given topic. This is followed by a series of questions for further reflection or small group discussion. Appendix 2 also contains a “workshop” on writing a personal lament in response to a lament psalm, and Vroegop offers his own lament as an example.

There are a couple of areas of discussion which warrant further exploration. Many lament psalms contain moments of imprecation. Vroegop addresses this briefly in a footnote where he comments that imprecation is not a call for personal vengeance, but for God to be faithful to his covenant promises (p. 140, n. 12). It appears to me that this topic is too important to be relegated to a few comments and a footnote. The pervasive language of imprecation, the confusion that it often generates, and the potential for its misappropriation or marginalization suggest a more sustained treatment would be appropriate, especially for an audience who have suffered so deeply, often at the hands of brothers and sisters in Christ.

On a couple of occasions, Vroegop states that lament leads to trust—for example, “We started by defining lament as a prayer in pain that leads to trust” (p. 150). This is certainly true. Lament psalms are intended to inspire both faith and hope. Yet laments themselves are also profound expressions of faith. Although Vroegop makes this point, I would have liked to see it more clearly and consistently expressed. Lament is itself an act of deep and profound trust and not simply a way to move toward such trust.

This is a very fine volume on an eminently important topic and the church would be well served to take up its invitation.