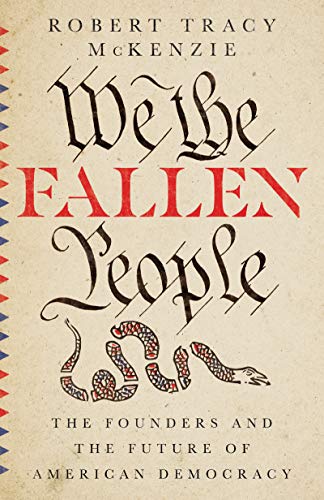 We live in an age awash with political commentary yet often lacking in serious political thought. Robert Tracy McKenzie’s book We the Fallen People is a well-written exception to that trend. His thesis, which he adapts from C. S. Lewis, is simple. There are two reasons to believe that government by majority rule is a good thing: because we trust the goodness of the people or because we don’t (p. 11). McKenzie wants us to consider the latter view.

With that proposition laid out, the architecture of the book is simple and persuasive. In the first section, McKenzie considers the founders and the Constitution era. He argues that the founding fathers viewed human nature as flawed and fallible. This is a different argument than proposing that the founders were Christians. McKenzie urges the reader to “set aside the question of whether the framers were Christian and focus instead on thinking Christianly about the framework of government they constructed” (p. 34). Following James Madison, McKenzie suggests that we view the Constitution as itself a form of commentary on human nature (p. 34, 74)—and, if so, the Constitution-as-commentary suggests an anthropology that is very close to the biblical view of man. Humans are capable of self-government because they are made in the image of God. But humans are fallen, and thus the best form of government is one that protects us from our proclivity to abuse power. However, the founding era’s distrust of human nature quickly morphed into a different view.

The second part of the book, “The Great Reversal,” deftly sketches the contours of the American political landscape in the 1820s, the years that saw Andrew Jackson first defeated by John Quincy Adams in the 1824 presidential election, then elected handily four years later. Jackson viewed the 1824 election as a failure of democracy in which the will of the people had been thwarted, and he set himself in the 1828 campaign to vindicate that wrong. McKenzie argues that the nature of these elections shows a “great reversal” in the way Americans viewed themselves, especially in the concept of “the people.” “Andrew is the candidate of the People…. He has always been found upon the side of the People …‘the People’ have always been for him” (p. 115, emphasis original). Thus, Jackson’s election was, in his own words, “a triumph of the virtue of the people” (p. 123). In roughly a generation from the founders’ time, Americans had largely come to view themselves as intrinsically virtuous and innately trustworthy. McKenzie evaluates this reversal as a move to a blind democratic faith: democracy is good because the people are good (p. 128).

This change is important enough that McKenzie devotes the next section to Jackson’s presidency. If this era represents the ascendency of democratic faith, what were its fruits? McKenzie considers two key episodes, the forcible removal of the Cherokee Indians from their homelands and the controversy over the Second Bank of the United States. In the first case, McKenzie argues that, in the most accurate sense of the word, this action was democratic: it reflected the majority will of the people and thus challenges our blind faith in democracy as intrinsically just. In the second case, the rhetoric surrounding the Bank War showed Jackson positioning himself as the defender of the people’s liberty while simultaneously increasing his power as the supposed sole defender of liberty. McKenzie argues that here Jackson began the populist stream that would remain in American politics to the present.

In his fourth section, McKenzie undertakes an extended survey of Alexis de Tocqueville’s writings. The two chapter titles in this section capture the goal well: “Puncturing Faith in Democracy” and “Nurturing Hope for Democracy.” Shallow, Twitter-sized engagements with de Tocqueville notwithstanding, McKenzie believes de Tocqueville does have something to teach us about our American experiment, but only if we listen carefully to him and engage the whole of his thought, which will lead us to consider both the perils and possibilities of democracy.

Finally, the fifth section of the book offers McKenzie’s lessons for contemporary readers. McKenzie wants us to “renew our thinking” (the subtitle of chapter nine), primarily by considering how not merely Jacksonian Americans, but we ourselves have rejected the founders’ view of human nature, placing blind faith in democracy (p. 252). This requires that we be alert to our “false assumptions about human nature” that are embedded in our current political practices (p. 256). We must also transform our behavior, which requires that we resist melding Christianity with any political party (p. 268), acknowledge the danger of political power (p. 272), and recognize that rhetoric matters (p. 275)—in short, that we resist externalizing threats to democracy and recognize instead that the most dangerous threats to democracy come from ourselves (p. 279).

We the Fallen People is a compelling read, well researched, and written by a careful historian with a gift for narrative summary. It would have been interesting to see McKenzie engage not only the Constitution but also the Declaration of Independence for its commentary on human nature. McKenzie acknowledges that Jefferson’s view of humanity was “rosier” than his peers (p. 42), which raises the question of whether the Declaration’s preamble creates a strand of American political anthropology in tension with a distrust of “we the fallen people.” Such a question, however, in no way takes away from McKenzie’s achievement but rather illustrates how well it stimulates reflection on the founding and future of American democracy.