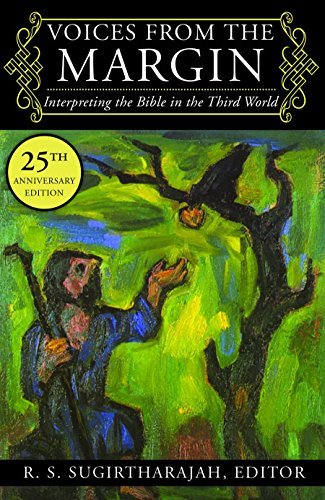 Voices from the Margin: Interpreting the Bible in the Third World

The title of this collection of reflections (many of which have appeared elsewhere) from around the globe indicates the twin thrust of its con tent. On the one hand, Voices from the Margin provides a platform for airing the concerns that dominate life, and thus theological discourse, in the Third World. On the other, this five-part book showcases the creative contextual approaches of scholars committed to the periphery, whose work is often ignored by Euro-American academic circles and publications. Lest his readers think that the ‘Third World’ is a geographic designation for the southern hemisphere, Sugirtharajah defines this term as referring to ‘a people who have been excluded from power, from the authority to mould and shape their future—racial minorities, the poor, women, and the marginalized peoples of the world’ (p. 3). Accordingly, not only authors from Latin America, Africa and Asia appear, but Afro-Americans and native Americans as well.

For those who live and work within that Euro-American milieu, the two major contributions of this volume are to be found in the areas of the contextualization of biblical reflection and the emphasis on ‘ordinary people’. The first is powerfully demonstrated in two ways. Part Two brings together readings of biblical texts by scholars working in different settings, and their selection of passages and themes clearly reflects the particular interests of each situation. Part Three, however, offers different perspectives on the same story, the exodus. Whereas those from Latin America (Pixley), Asia (Moon and a women’s group in India) and Africa (Ela) champion the liberating potential of that story, the Palestinian (Ateek) and the native American (Warrior) protest that the Bible has been used against their people; the conquered, in other words, see the text through very distinct lenses. An appreciation of the diversity of readings and the originality of disparate perceptions of the text cannot but enrich the study of the Bible.

The second issue, the desire to take the readings of the untrained into account, is motivated by the goal ‘to place the Bible where it belongs—in the hands of the people’ (pp. 434f.). In contrast to the supposed objective and detached approaches of the West, traditional critical methods are used throughout this book to present work designed to liberate the oppressed, and Part Five gives examples of lay interaction with the Bible. The positive lesson to be gained is that scholarship must have as a priority to actively seek the well-being of others and not be pursued for purely academic interest.

The theological point, however, that surfaces time and again in Voices from the Margin and which might prove troubling to evangelicals is how some conceptualize the nature of biblical authority in ways which would undermine more traditional views. In Part One several authors claim that the Bible is ideologically compromised and reflects the perspective of the powerful (Mosala) or a patriarchal mindset (Tamez). Experience as a black or as a woman becomes foundational, and consequently biblical authority becomes functional, not onto-logical—that is, the Bible is ideologically conditioned but can still serve liberating ends. Samartha’s chapter, as well as the contributions in Part Four, speaks from the multi-faith context of Asia, where Christianity is a minority religion and the Bible is just one of several holy books. Once again, the Bible’s authority is simply functional, as it is said that no sacred text can claim a corner on the truth and that all religions can be mutually enriching and aid in the common aim of liberation. The task for evangelicals is to formulate their understanding of biblical authority in light of these new challenges.

This theological and hermeneutical crux can be complicated by a pastoral observation. Is it not possible that the reconstructions of the ideological criticism of several of these authors could create a new élite of scholars? Can ‘ordinary people’ grasp the complexities of this kind of approach, and would these be natural readings by the uninitiated? Will not the text be removed once more from easy access and scholarly study from everyday life? Interestingly, the section of popular readings (Part Five) is the shortest and last of Voices from the Margin.

Sugirtharajah has brought together these works from different contexts with the purpose of helping those outside the Third World to become more sensitive and receptive to what others are saying of the biblical text. New insights await those willing to listen and to admit their blind spots. I would hope that any theological reservations that some might have would not impede this book from accomplishing this crucial task.