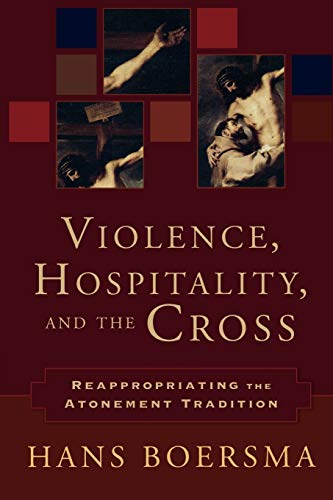 VIOLENCE, HOSPITALITY AND THE CROSS. REAPPROPRIATING THE ATONEMENT TRADITION

The first thing that a reader of this book has to know is that, as the title may suggest, it cannot be understood properly without some knowledge of the concepts of ‘violence’ and of ‘hospitality’, as these have been developed in post-modern theory, and particularly in the writings of Emmanuel Levinas and Jacques Derrida. Dr Boersma writes from a Dutch Reformed background, and so is deeply conscious of the high doctrine of election which generally goes under the designation of Calvinism. He develops the history of this doctrine by showing that it did not originate with Calvin, and can be found, at least in embryonic form, as far back as Irenaeus in the late second century. He is not concerned to refute the Calvinist doctrine of ‘limited atonement’ so much as to expand it, by taking other perspectives into consideration as well. To do this, he employs the language of ‘hospitality’ as a way of explaining God’s grace, and argues that ‘violence’, which includes the death of Christ on the cross, may sometimes be necessary if true hospitality is to be manifested.

These categories of thought will not be familiar to most people, and it must be said that they are open to serious objection. ‘Hospitality’ is not the same as divine grace, for the simple reason that God’s children are not merely guests in his kingdom. The relationship which Christ has given us with himself and with the other members of the Godhead goes much deeper than anything ‘hospitality’ would normally express, and this makes many parts of the book sound somewhat incongruous. The other problem is that ‘violence’ is not the term one would normally use to describe the crucifixion. The reason for this is that Jesus was put to death according to a legal procedure, whereas ‘violence’ in the true sense is a violation of the law. Boersma, along with much modern opinion it must be said, has allowed himself to be persuaded that any form of punishment which involves suffering can legitimately be regarded as ‘violent’, which is a misuse of language. It is the kind of thinking which allows terrorist actions to be equated with army peacekeeping operations both involve the use of force, and so both are ‘violent’. This unfortunately ignores the fact that there is no moral equivalence between them, and brings the legitimate use of coercion into disrepute by association. Jesus died under the law and according to it, which makes it difficult to see his death in terms of ‘violence’.

Reading somewhat below the surface of the text, the reader soon becomes aware that Boersma is moving away from classical Reformed teaching, even though he expressly states that he has no intention of denying its validity. His concentration on violence means that he downplays the fact of human sin, which made the atonement and the death of Christ necessary in the first place. He speaks very highly of Abelard’s moral (or ‘exemplary’) theory of atonement, and bends over backwards to find as much room for unlimited divine ‘hospitality’ as he can. He even recommends the practice of sacramental penance, though he understands why the Reformers thought it was being abused in the sixteenth century. It is quite true, as he says, that many Evangelicals suffer from a burden of unconfessed guilt, but this can be dealt with by preaching forgiveness from the pulpit, and does not require a return to some form of auricular confession.

The linguistic confusion reaches its height in the chapter devoted to church life, where the word ‘hospitality’ appears in its more usual context, which is that of ‘open communion’. Eucharistic hospitality is not an act of God but a decision of the church, and so whether it is offered or not, it has no bearing on divine grace, or on anyone’s state before the Lord. Boersma has made a valiant attempt to understand and to relate to one prominent trend in modern philosophical thought, and those who are accustomed to that way of thinking will find his observations penetrating and helpful. Others are more likely to be mystified by an unfamiliar vocabulary, and will probably be inclined to read his reinterpretations of traditional beliefs as departures from them. That would be a pity, because at bottom, Boersma is trying to do what every good preacher and evangelist must attempt—to speak to the minds of the age in a language which they can understand and accept, but in a way which remains faithful to the everlasting truth of the Christian Gospel.