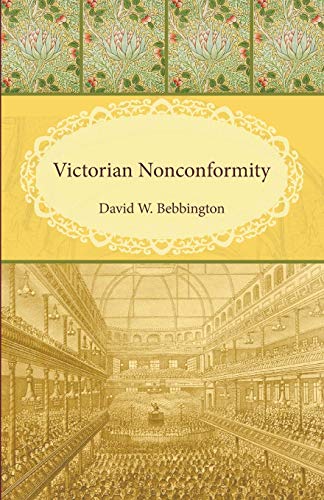 David Bebbington, longtime professor of history at the University of Stirling in Scotland, is arguably the leading historian of evangelicalism in the British world. His famous evangelical “quadrilateral” of biblicism, crucicentrism, conversionism, and activism has enjoyed wide acceptance by many scholars while provoking ongoing debate among others. The same could be said of his contention that modern evangelicalism was incubated by the Enlightenment and birthed during the eighteenth-century transatlantic awakenings. In Victorian Nonconformity, a revision of previously published material, Bebbington focuses his attention upon (mostly) evangelicals who worshiped outside the Church of England during the latter two-thirds of the nineteenth century.

Bebbington argues, “Victorian Nonconformity was an attempt to create a Christian counter-culture” (p. 2). With the exception of the Unitarians, the Dissenters (as they were also called) were by and large evangelicals of the Methodist, Congregationalist, and Baptist varieties. Each of these traditions, as well as their various subgroups, receive treatment. Victorian Nonconformists were revival-influenced evangelists, missionaries, and champions of social reform, they emerged from nearly every social class (though mostly the middle classes), and they could be found in the countryside and in Britain’s urban centers. Women represented a disproportionate number of Dissenters, though as a general rule they were not welcomed into pulpits. Contra the Helmstadter thesis, which Bebbington critiques, most Nonconformists were both champions of individual liberty of conscience and proponents of the importance of communal expressions of the faith. Nonconformity had declined numerically from its midcentury strength by the turn of the twentieth century, in large part due to a doctrinal declension that negatively affected piety and evangelism.

Victorian Nonconformity is an excellent introduction to the “chapel” culture that existed outside the Established Church for much of the nineteenth century. The bibliography and index make this an especially suitable resource for classroom use. Numerous form errors, including misplaced hyphens, missing or extra spaces, and indentation problems distract from a helpful overview of the topic.