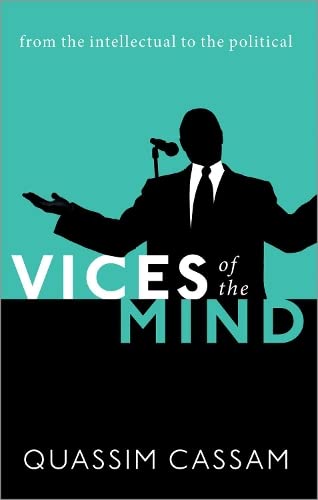 Vices of the Mind: From the Intellectual to the Political

Written by Quassim Cassam Reviewed By Timothy D. B. Ingrum
Ethics and Pastoralia

The era of Trump, Brexit, and ever more heated public debate over which news is most fake, has spawned a cottage industry in the relatively new field of vice epistemology. Branching from virtue epistemology, which emerged as an Aristotelian retrieval in the 1990s, the vice variant examines the personal qualities that make us prone to epistemic error. British philosopher Quassim Cassam has provided a study of epistemic vice that begins with its careful definition and extends out to its taxonomy, mechanisms, real-world importance, case studies, and possibilities for mitigation.

Taking a so-called obstructivist viewpoint, Cassam defines an intellectual vice as “a blameworthy or otherwise reprehensible character trait, attitude, or way of thinking that systematically obstructs the gaining, keeping, or sharing of knowledge” (p. 23). Whereas its rival, motivationalism, blames intellectual vice on bad motives (p. 17), obstructivism is broader and more consequentialist, asking what personal qualities have the effect of inhibiting knowledge. “Blameworthy” and “reprehensible” are important technical terms in Cassam’s scheme. Some vices are blameworthy in themselves, but others are merely reprehensible, meaning that they reflect poorly on the person and, for that reason, merit criticism. For instance, someone who grew up indoctrinated by the Taliban may not be blamable for developing dogmatic and closed-minded habits, but they still reflect badly on him (pp. 19–21).

The way that vices can obstruct knowledge is twofold. First, they shut down effective inquiry—for instance, the intellectually arrogant person has no interest in listening to learn from another (pp. 7–8). Second, vices like prejudice can twist the operation of the senses themselves—for instance, by causing a biased witness to “see” a crime wrongly (p. 8).

After defining intellectual vice, Cassam defends the very concepts of virtue and vice as meaningful explanations of intellectual behavior, over against competing claims that structural factors and cognitive biases provide better accounts. Without dismissing these other lenses for understanding human thinking, Cassam maintains that vice, with its personal level of explanation, nevertheless has its place alongside them (pp. 23–27). He goes on to supply further detail on the three categories in his definition. A character vice, such as closed-mindedness, is a dispositional trait (pp. 30–34). Less characteristic of the agent, a thinking vice, such as gullibility, is “a particular piece of thinking” or a “thinking style” (p. 56). Finally, an attitude vice, such as prejudice, is a stance or position, an affective evaluation of an object (pp. 81–83). In the latter chapters, Cassam explores the pernicious function of intellectual vices: they nullify justification of knowledge (pp. 108–09), stealthily mask their own detection (pp. 144–46), and resistantly hamper the epistemic virtues needed to undo them (p. 183).

Cassam’s writing is substantive and efficient, but conversational enough to avoid swamping the reader in the kind of minutiae that often plagues analytic philosophy. The book’s brief length allows him space to interact with interlocutors but not engage in lengthy polemics. He structures both the book and its chapters with welcome lucidity, usually hooking the reader with a concrete scenario before laying out the key questions that guide each chapter.

These real-world illustrations make intellectual vice come alive with its poisonous ramifications. At the same time, the follies of real people stumbling into poor thinking lends human pathos to the work. The honest reader can see him or herself in the case studies with little difficulty. What is more, the examples illustrate how frequently epistemic vices occur in life and help the reader understand them more precisely. In particular, the discussion of epistemic insouciance and its distinction from lying (pp. 78–81) is as fascinating as it is useful for discerning exactly how that politician, author, or conversation partner is compromising the truth.

Cassam aptly leads his readers through a tour of broader conversations on virtue epistemology and related fields, balancing thoroughness with accessibility to the newcomer. His interaction with other authors and his thorough presentation make this an impressive work that cannot be ignored by anyone seeking a careful understanding of virtue and vice epistemology.

While welcoming Cassam’s emphasis on personal qualities, rather than merely the structural or the neurological, Christian readers will note that some of his arguments rely on non-hamartiological assumptions. These make good sense from his secular standpoint, but the Christian with a biblical perspective on sin and responsibility will dispute some of his conclusions. The most prominent example is his argument that blame for a vice depends on the agent’s control over contracting or maintaining it (pp. 123–30). While a Christian can appreciate the common-sense logic here, the biblical-theological categories of original, actual, intentional, and unintentional sin point to a different analysis of responsibility. To be specific, the distinction between blame and mere reprehensibility may not withstand theological scrutiny (e.g., Rom 9:10–13). Still, this difference qualifies less as a weakness in Cassam’s book than as a launching point for constructive dialog from a Christian viewpoint.

Similarly, the Christian, who believes that nothing short of spiritual regeneration can begin to undo a person’s natural vicious habits (Jer 13:23; Eph 2:1–5; 4:17–24), may find Cassam’s discussion on self-improvement naïve. Notably, Cassam himself appears to weave back and forth between admitting as much, and holding out hope that vice mitigation and reversal are indeed possible (pp. 176–87). Nevertheless, the self-help and superficial nature of his suggestions (for instance, conducting paraphrasing exercises to improve one’s listening and combat intellectual arrogance) rings hollow over against the radical and sweeping heart change wrought by the Holy Spirit’s re-creation of believers in Christ (Ezek 36:25–27; Tit 3:5). Again, Cassam does his best from a secular viewpoint, but biblical Christianity offers a deeper well of resources for heart and mind renewal.

With its ability to advance the scholarly conversation, orient the beginner, intrigue the otherwise curious reader, and supply a user’s guide to the epistemic mischief that blights today’s media environment and our own hearts, Vices of the Mind provides a valuable contribution to the topic of intellectual vice.