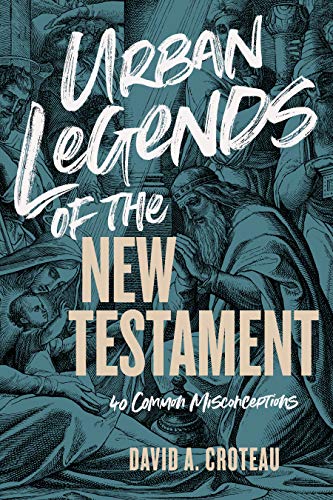 In this work, Urban Legends of the New Testament, David Croteau seeks to address commonly espoused misunderstandings of the New Testament. The author examines forty exegetical myths commonly repeated in pulpits, books, and popular Bible studies. The author defines an “urban legend” as “a commonly circulated myth, repeated throughout the culture as common knowledge, but which isn’t true” (p. xiii). In addressing commonly repeated errors in New Testament studies Croteau seeks to “focus on the correct interpretation of each passage and not on who has taught a legendary interpretation” (p. xiv).

The book contains forty concise chapters that generally range from four to six pages in length. In each chapter the author outlines the basic legend, as it is commonly presented in mainstream Christian circles, followed by his explanation as to why the respective interpretation should be rejected. Having critiqued the shortcomings of each “legend” Croteau then provides his own brief understanding of the verse in question before providing some general applications as well as a bibliography for further study.

The book itself is highly readable. The short chapters along with the diversity of topics traversed keep the reader from getting bogged down. The tone of the work, along with the subjects covered, would indicate that the work is probably directed to a lay level audience that has some familiarity with the Scriptures. While there is engagement with technical works the language of the book is accessible to most. Helpfully, throughout the book there is a series of QR codes that one can scan and be taken to a short video clip that summarizes the basic issues of the chapter.

Urban Legends is a fresh and creative book. The author’s consistent structure of presenting the legend, critiquing it, and then providing an alternative understanding is clear and engaging. Croteau is evenhanded in his assessment and even in disputable interpretative conversation maintains a good degree of charity and scholarly humility. Many common misconceptions such as “Do not judge others,” “Agape is superior love to Phileo,” and “Jesus died when he was thirty-three,” though dismissed by most in the scholarly community, still manage to find legs at a popular level. By addressing such well-known errors the author provides more than just a corrective on the individual verse or issue, the author also models for the reader critically reflective hermeneutics.

The strength of the book is perhaps also its biggest weakness. As the author is addressing common legends of New Testament interpretation the target audience seems to be the common Christian in church rather than those leading in the pastorate or the academy. Of course there is nothing wrong with this, and indeed there is tremendous value in writing for this audience. For the seasoned Christian or pastor, however, many of the myths would already be known and understood as legends. Few serious students of the Scripture believe that “Jesus was a Carpenter” working in wood, “The Gospel is dynamite” in Acts 1:8, or “Good works are optional for the Christian.” While many of the legends in the books still find popularity many of those listed have died off and are no longer finding any airtime.

A few of the chapters could be clearer. In chapter 16 on the legend of “‘Go’ is not a command in the Great Commission” (pp. 91–95), for example, the author seeks to explain in simple terms the grammatical reasons why the participle in dispute should be taken with an imperatival force. The author hints, and I think correctly, that the participle should be understood as one of attendant circumstance. Without using jargon he does his best to argue this by looking at both grammar and contextual factors. Despite the author’s efforts to explain genuine grammatical complexity, however, one wonders whether the lay reader would sufficiently grasp the issue being discussed let alone have the skill to engage with it at a critical level. In this instance Croteau’s discussion seems to move away from a popular level to those in more technical spheres. Such lack of clarity, however, is the exception in the book.

Urban Legends of the New Testament is an easy and engaging read. Croteau has provided a helpful resource that not only corrects commonly perpetuated exegetical myths, but also provides a humble reminder that the student of Scripture must be diligent, judicious, and careful in handling the word of truth.