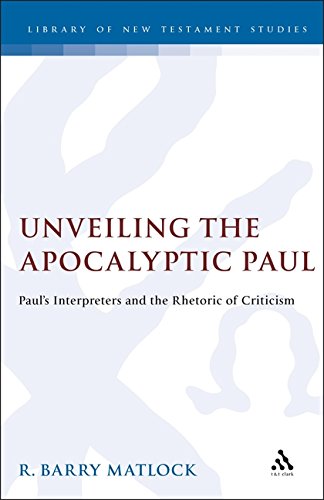 Unveiling the Apocalyptic Paul: Paul’s Interpreters and the Rhetoric of Criticism (JSNTSS 127)

Before any criticisms of this book are registered, it should be mentioned that it is a highly worthwhile study that deserves scholarly attention. It has two distinct parts: a tracing of the history of concern for ‘apocalyptic/apocalypticism’ in Pauline studies from Albert Schweitzer to Ernst Käsemann, and a discussion of the concept of apocalyptic/apocalypticism itself. Matlock’s approach is informed by modern philosophical hermeneutics, and much of the clarity that he brings to the topic seems to stem from the principles he has drawn from this area and its key proponents, such as Hans-Georg Gadamer.

Matlock’s critique of modern discussion of apocalyptic/apocalypticism, following largely in the steps of Christopher Rowland’s work, is decisive and scathing. He draws embarrassing attention to the circularity of ‘apocalypticism’ as a category of thought that is supposedly drawn from ‘apocalypses’, and then the designation of works as ‘apocalyptic’ that display features of ‘apocalypticism’ (which are not the apocalypticism of the original documents that gave rise to the concept of ‘apocalyptic’). His conclusion (following others) that ‘apocalypticism’, if it will be a helpful category for interpretation, needs to be drawn from the ‘apocalypses’, is telling. The use of such a category in the investigation of Paul’s eschatological expectations, although time-honoured and virtually hallowed in Pauline studies, is in need of much redefinition, as, indeed, is the entire concept of ‘apocalypticism’. The discussion of this topic in specific terms, as well as critique of the modern use of ‘apocalypticism’ to interpret Paul (in figures such as J.C. Beker), is by far the most rewarding part of the book (pp. 247–316) and is, indeed, that section with which scholarly discussion of the topic will now have to contend. The lack of a positive solution to the problem on Matlock’s part will be seen by many as unfortunate, but it is to be hoped that Matlock’s further work will address this shortcoming.

Now, unfortunately, to some criticism of this fine project. Although the book review is not always the place to speak of such matters as style and the use of language, Matlock’s long-winded and florid style must be noted. Two things in specific should be mentioned (and forgiven by those who make use of this study). (1) Quotations in the book are consistently much too long—running to over a page of single-spaced, indented material—and almost never necessary (he tends to sum up the salient points both before and after the quotations). (2) Matlock’s writing style is very florid in places. These items do not detract from the value of the book, but they do make it harder to navigate through the superfluous pages. The length of his accounts of various Pauline scholars’ use of apocalyptic, coupled with his idiosyncratic referencing style (he tends simply to cite page numbers in the body of the text) mean frequent backtracking and confusion while reading. (He even seems to have been able to drive the press to print an entire excursus of several pages in small type, a practice for which Sheffield Academic press is not known.) A final difficulty with the book is the rather sharp criticism of J.H. Charlesworth (see esp. p. 282). Deserving or not, the manner of stating the criticism is unworthy.

Again, however, I must reiterate that, for all the frustrations of reading this study, it is of the highest quality. Students of apocalyptic and/or Paul will ignore it at their peril.