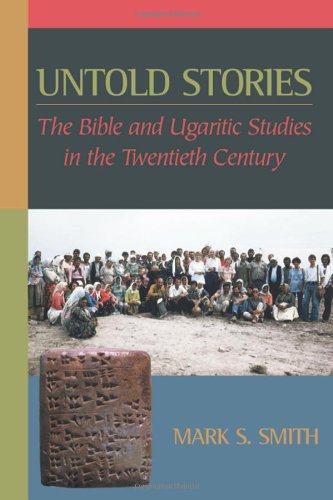 UNTOLD STORIES: THE BIBLE AND UGARITIC STUDIES IN THE TWENTIETH CENTURY

In this volume Mark Smith chronicles the fascinating history of the relationship between the West Semitic language, Ugaritic (discovered in 1928) and the field of OT studies. The book is entitled Untold Storiesbecause it relates both the larger, untold story of how Ugaritic studies contributed so massively to the study of the Bible in the twentieth century and many unknown stories involving the lives and scholarship of the field’s major figures.

After a short introduction, the book is divided into four chapters which cover the different periods in the history of Ugaritic studies. In each chapter Smith provides a list of the basic texts and tools for the period; a discussion of the major works and advances in language, literature and religion; a presentation of the major figures in the study of Ugaritic and the programmes with which they were associated and an examination of an issue representative of the intellectual climate of each period.

Chapter one describes the period from the discovery of the tablets to 1945, documenting the exciting process of discovery, decipherment and publication of major texts. Of particular interest is the account about the conflict between E. A. Speiser and C. H. Gordon, since this resulted in Gordon’s pursuit of the language and the production of his Ugaritic Grammar.

Chapter two narrates the period of synthesis and comparative study (1946–70). Particular issues of the period discussed include: the origin and development of the alphabet; myth-and-ritual studies; and the possible evidence for an enthronement festival in ancient Ugarit and Israel.

Chapter three relates the period between 1970–85—a time when new texts and journals appeared, but also a time when a crisis in methodology arose. Though the chapter properly highlights the contributions of the scholars of this period, it is Smith’s treatment and evaluation of the work of Mitchell Dahood and the decline of interest in comparative studies that are of special interest. While it would be incorrect to place all the credit (or blame) on Dahood, Brevard Childs, as quoted by Smith, is probably not very far off the mark when he states that the problems of Dahood’s work signalled the demise of Ugaritic for biblical studies (163).

Chapter four discusses the period of resurgence in tools and methodology (1985–99), a time when Ugaritology became a discipline in its own right. Of particular interest here are the discussions of the current state and future of Ugaritic studies which demonstrate the vitality and promise of the discipline. In this chapter, as well as in some of the previous ones, Smith discusses the origin and nature of monotheism in the OT. While Smith’s reconstruction is a possible way of understanding the evidence, there are other possibilities that are concisely outlined by B. T. Arnold, ‘Religion in Ancient Israel’ in Baker and Arnold (eds), The Face of Old Testament Studies (Grand Rapids, 1999), 391–420.

Throughout the book Smith sprinkles a number of very entertaining, humorous vignettes. He also includes instances where individuals overcome great obstacles, as well as moments of human tragedy (e.g. the premature death of Peter Craigie). In a number of places, the reader gets a glimpse of the individual personalities that contributed to the development of the field of Ugaritology. One of the interesting products of Smith’s research is the observation of what counts as ‘most scholarly’ in different time periods.

This book should not only be required reading at the beginning of any course in Ugaritic but it also ought be read by all students and scholars of the Hebrew Bible for it serves as an excellent grounding in the history of comparative studies, an aspect of biblical interpretation that will, in all likelihood, see a resurgence in coming years. As excavations continue to supply scholars with more material for understanding the OT in its context, Smith’s book reminds scholars of the excellent methods and work of past scholars that ought to be emulated, and challenges present-day scholarship not to repeat some of the same errors that past scholarship committed.