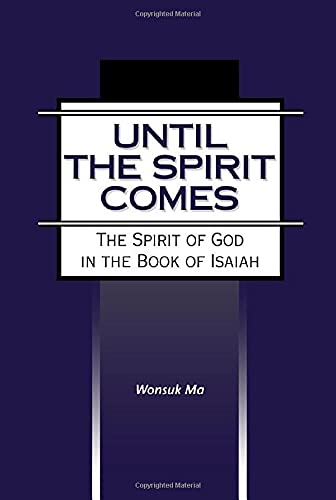 Wonsuk Ma prefaces this study by saying, ‘As an Asian Pentecostal, and now Old Testament scholar, the years of my study have taught that the Spirit of God works within and for communities, although individuals may experience his presence as well’ (7). This offers the prospect of an important insight into Isaiah from non-western scholarship. Coming from a missionary among animist peoples of the Philippines, and a seminary lecturer in Baguio City, such insight into God’s work among the community of faith is to be welcomed warmly.

This revised Fuller Theological Seminary PhD thesis contributes to an uncrowded area of OT study, and provides the first full-length study on rūah in Isaiah. Following a brief review of the spirit tradition prior to Isaiah, Ma examines the term ‘spirit’ in a two-stage process. Firstly, ‘spirit’ is examined according to pre-exilic, exilic, and post-exilic Isaianic traditions. These do not correspond precisely to the three-fold division of Isaiah as per Duhm, but that division is treated as a given. This deliberately ‘fragmentary’ reading is intended to show the value of the study to traditional historical criticism. Secondly and in contrast, the material is viewed synchronically, from the standpoint of the canonical whole, in a nod to current trends in Isaiah studies. The intention is to provide a model for a holistic reading of Isaiah. The effect of this dual approach is a fair amount of repetition, but this very fact appears to vindicate the results of the approach.

Ma’s conclusions are summarised under two main headings. Firstly, the evolution of the spirit traditions are seen in relation to the concepts of leadership, prophetism, and creation. Spirit endowed leadership now contains a moral and spiritual emphasis rather than military or physical, as in pre-Isaianic traditions. Regarding reference to the prophetic spirit, there is development from the near absence in pre-exilic Isaiah to its prominence in the post-exilic book (61:1). The significance of the spirit in creation is the pouring out of the life-giving spirit on the entire community.

In each of these areas Ma finds what he calls a ‘democratising’ effect. This term is never defined, nor are its implications spelled out, but the intent seems to be that each of the major spheres of activity of the Spirit of God in Isaiah comes finally (whether diachronically or synchronically) to be bestowed on the entire restored community of God. So, the moral and spiritual emphasis of 44:1, the prophetic word in 59:21, and the world to come described in 32:15–20, all describe the Spirit poured out on the entire community, achieving the full effect of Joel 3:1–3.

The second heading under which Ma presents conclusions is eschatology—one of only a few major themes which appear throughout the whole of Isaiah. The Spirit of God prepares the way for and inaugurates the New Age (32:15; 44:3), and restores his people by the ‘perfection of a faithful remnant’ (210). The ‘messianic’ figure of the future evolves from a Davidic king to a more prophetic leader with an increasingly moral and religious role. He will accomplish his task only through God’s spirit.

The format of this book bears all the hallmarks of a PhD thesis. The evidence is evaluated thoroughly; the conclusions, while not groundbreaking, are solidly based. I hope that Ma will go on to draw out the implications of these conclusions, and so complete the tantalising promise of the preface.