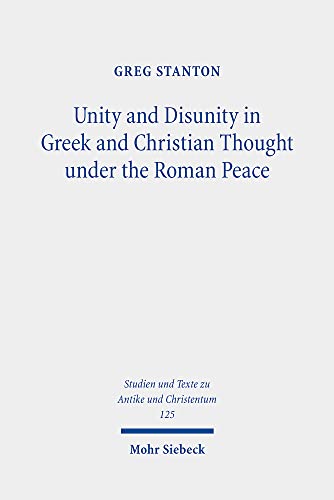 After various contributions to Greek, Roman, and New Testament studies, Greg Stanton, adjunct associate professor at the University of New England in Australia, is offering the reader his first full length monograph. His main intent with this volume is to “explore what Greeks under Roman control thought about unity at several levels” (p. v) while also giving attention to “Christian writers of the first two centuries” (p. 34).

The several levels of unity create the outline of the book. Chapter 1 sets the stage with a survey of modern approaches to unity and by situating his study in the era of the pax Romana (i.e., Roman peace), which he designates from “27 B.C.E.” to “197 C.E.” (p. 240). In chapters 2–6, he discusses the concept of unity in Greek thought. Chapter 2 gives attention to unity in Greek cities; chapter 3 explores the unity of the Roman empire; chapter 4 surveys views of the unity of humankind; the fifth chapter analyzes the unity that exists between God/gods, humans and the universe; and the sixth chapter explores the unity of the universe. He focuses in depth on five Greco-Roman authors: (1) Epictetus; (2) Dion of Prousa (or Dio Chrysostom); (3) Plutarch; (4) Aelius Aristides; and (5) Marcus Aurelius. In addition to these five, he gives attention to “the Hermetic corpus” (p. 35) and the Pseudo-Aristotle work On the Universe.

The seventh and eight chapters explore early Christian views of unity, comparing these views to the broader discussion of unity found in the previous chapters. He gives attention to the New Testament, the Apostolic Fathers (e.g., 1–2 Clement; Shepherd of Hermas) and the Apologists (e.g., Justin Martyr, Tatian). The ninth chapter concludes the book by summarizing his findings.

Some highlights will suffice to give the reader a sense of the book’s content. In the second chapter, Stanton argues that discussion of human relationships centered around two opposite poles, namely, “harmony” (homonoia) and “factional conflict” (stasis) (p. 44). Remarkably, statis was held in such contempt that war was preferred to it and tyranny was deemed more moderate than it. Stasis, Stanton states, “can be called the chief of humiliations and disasters”(!) (p. 51). Morever, Stanton finds the Greek authors he treats as being either too idealistic in their promotion of unity and harmony or disingenuous. In the third chapter, Stanton asks how “Greek intellectuals” conceived of the Roman empire. He concludes that views ranged from full acceptance of Rome as uniting “the whole of the inhabited world” to reluctant admission that “there were peoples beyond the Roman frontier” (p. 90). Yet all agreed that the peace achieved by the empire was commendable.

In the fifth chapter, Stanton argues against the notion of some scholars that monotheism existed “among non-Christian authors” (p. 125), stating that there was “a tendency to assert … [a] harmony or unity,” even though “such an assertion went beyond the author’s beliefs” (p. 128). Thus, apparent monotheistic statements were in fact the promotion of one specific deity while retaining polytheism. Moreover, god(s) were frequently identified with the universe, which, Stanton asserts, is “explained by … the desire to … have one concept of unity overlapping with another” (p. 146). Regarding the unity of the universe, he argues that belief “in the harmony of the universe” (p. 172) was widespread and often connected to “harmony in human affairs” (p. 173).

Turning to Christian views of unity, Stanton suggests that the NT contains both expressions of unity (e.g., the body metaphor in Ephesians) and disunity (e.g., 3 John; Jude). The author sees the NT as setting the pattern for approaches to unity and handling of disunity among the writings of the Apostolic Fathers and Apologists, describing the handling of disunity in the NT and subsequent writings as “ruthless” (pp. 194–95). Additionally, he sees the advice given by Christian writers to avoid envy and dissension in order to promote unity as parallel to similar advice offered by Greek writers. Whereas he discerns significant overlap regarding church unity between the NT and subsequent Christians, Stanton argues that the NT is not the source of adherence to the unity of humankind nor of the harmony of the universe by some patristic writers. Rather, it reflects a shared heritage with “educated members of the Roman empire” (p. 224).

One criticism mars an otherwise strong work. Stanton’s caricature of the New Testament approach to disunity as “ruthless” with very little discussion lacks the kind of careful reading one would expect. Moreover, one wishes he had discussed Romans 5 in more depth in his explication of Christian views of the unity of humankind. Nevertheless, Stanton has provided much food for thought regarding approaches to unity in the first two centuries of the common era. As his nearly fifty-page bibliography demonstrates, he is deeply conversant with both primary and secondary literature on the topic and yet he conveys his findings in just over 250 pages—a remarkable feat indeed.

This book will benefit several different audiences. For students and scholars of the NT, he places NT statements on unity and disunity in their broader Greek cultural context; for classicists and patristics students, he provides a thorough discussion of key approaches to unity and disunity in Greek thought as well as how generations of Christians after the NT received the ideas of the NT and the wider cultural heritage that they shared.