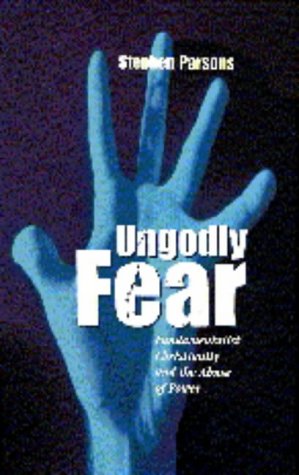 Ungodly Fear: Fundamentalist Christianity and the Abuse of Power

This is a book of two halves. The first half (chs 1–6) contains case studies of episodes of abuse which have allegedly taken place in various fundamentalist churches. These are supplemented by the author’s comments upon the organisations and ideas responsible for the abuse. Chapter 6 focuses on the incident involving David Koresh at Waco, Texas in 1993 and its background. The second half (chs 7–10) tries to place the fundamentalist mindset into a wider context in order to understand and critique it. In chapter 7 Parsons attempts to define fundamentalism, evangelicalism, and the charismatic movement before moving on to a critique of the ‘fundamentalist doctrine’ of the inspiration and inerrancy of Scripture. Much of the previous discussion would have benefited from having this chapter first; it is key to understanding the perspective of the author and the central thesis of the book, which is that ‘[a]ny insistence on the inerrancy of Scripture is often accompanied by increased and often inappropriate power on the part of the leaders in a church’ (226).

There are some important warnings in this book which fundamentalist/ charismatic Christians need to heed. The excessive triumphalism of ‘Christianity à la John Wimber’ as it is called, and the health and wealth gospel, can be damaging to many, particularly when coupled with an atmosphere that encourages a sense of spiritual dependence upon the leadership. The dangers of the approach to counselling which involves the use of ‘pictures’ being given by God to diagnose spiritual problems are well highlighted. Even in less charismatic churches, it is good to highlight that all ministers need to learn how to deal openly and fairly with views contrary to a perceived ‘party line’ within their church without coercion.

For Parsons, however, the real problem is not so much the sinful nature of the leadership but the link between doctrine and abuse, in particular the doctrine of inspiration—the ‘arbitrary imposition of dogmatic ideas of divine authorship’ (11). Other doctrines are also seen as highly dangerous; in one startling section on child-rearing practices, the use of smacking (‘Violence against the young’) is linked to the substitutionary doctrine of the atonement, the doctrine of hell, the destructive Calvinist doctrine of people like Jonathan Edwards (who apparently lived without any assurance of conversion or salvation!), via Hitler’s Holocaust, the racism of the Ku Klux Klan and the imposed submission of women, to the ‘sadomasochistic fantasies’ of the book of Revelation (51–57). The links are subtle of course, but the overall impression of lumping these things together is not a pleasant, or a very dispassionate one.

The (deliberate) lack of footnotes is a problem throughout the book; it took me quite some time, for example, to locate a quotation from J.I. Packer incorrectly used on page 244, because there is not a single book by Packer listed in the ten page bibliography. Overall, although I found some of the stories in this book to be most moving and could empathise with others, I was profoundly disappointed by the classic liberal doctrinal assaults made, most unfairly, on the back of them. The use and abuse of power in the local church is an essential subject for Christians to be aware of, but I would rather recommend Paul Beasley-Murray’s book Power for God’s Sake (reviewed in Themelios 25.1) because Beasley-Murray critiques his own tradition. Parsons’ book can help evangelicals to see how they are perceived by liberals. Oddly, for a book with an avowedly pastoral intent, it makes no attempt to help those who do hold doctrines such as the inspiration of Scripture to avoid potential dangers. The only antidote to abuse, it would seem, is to abandon such beliefs in favour of classic liberalism.

Lee Gatiss is associate minister of St. Helen’s, Bishopsgate in London and editor of The Theologian: The Internet Journal for Integrated Theology (www.theologian.org.uk). In Autumn 2009 he plans to begin a PhD at Cambridge University in seventeenth-century biblical interpretation.