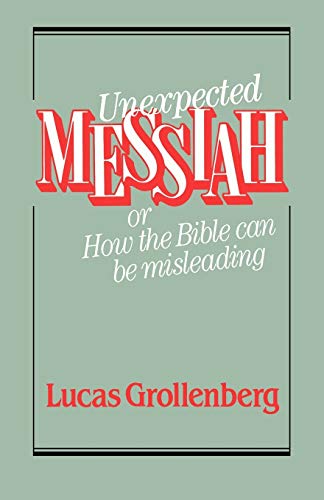 Unexpected Messiah: or How the Bible can be Misleading

I have had difficulty deciding where in my shelves this book should go. Ch. 2 belongs under intertestamental Judaism, ch. 3 under lives of Jesus, ch. 4 under Christian origins, ch. 5 under NT use of the OT, ch. 6 under Christian anti-Judaism, and chs. 1 and 7 under christology. And all this in a modest paperback!

Its subject is essentially how far Jesus fitted into or conflicted with Jewish messianic expectations, and why his followers found it necessary to distance themselves increasingly from Judaism. Father Grollenberg is painfully aware that Christians traditionally appeal to the OT in ways which conflict with most modern scholars’ views on the meaning of the text and also that their adoption of the Jewish scriptures into the Christian Bible not only offends Jews, but also promotes a superior and judgmental approach to Judaism which is easily exploited by anti-Jewish prejudice. He writes explictly as a Christian, but, on this issue at least, an embarrassed one.

His sixth chapter (The New Scriptures: Anti-Jewish?’) considers at some length the impression given by John, Matthew, Paul and Luke. His analysis of the data would form a useful non-technical basis for discussion of the increasingly fashionable subject of NT ‘anti-Judaism’. His own conclusions are clear and provocative. The attitudes he discovers lead him to apologize for the existence of such ‘anti-Jewish’ texts. We would be better off without the NT canon, and must not speak of the ‘inspiration’ of such writings in such a way that God is implicated in their objectionable views.

Yet he declares himself a convinced Christian (it is ‘in his genes’!), and so feels it necessary to undertake the task, so familiar now in Jewish-Christian discussion, of dissociating Jesus from his embarrassing followers. The final chapter is revealingly entitled ‘Jesus. A “Fulfilment” Nevertheless’. He cannot accept the old uncritical idea of Jesus literally fufilling prophetic predictions, but finds ‘fulfilment’ more in what has traditionally been known as typology; he prefers to speak of some OT figures as ‘preliminary studies’. He offers as examples Jeremiah (especially in his polemic against the temple), Ps. 22, the son of God figure (especially as developed in Wisdom 2), and the calling of Israel to be the source of Yahweh’s blessing to the nations. Such models find their fulfilment in Jesus and his movement, despite the tendency of many of its earliest spokesmen to develop the idea of fulfilment in ways which Jesus, the preacher of love, could not have countenanced.

Behind this conclusion lies a readable and generally well-compiled account (in chs. 2–4) of Christian beginnings in the context of Jewish expectations. Grollenberg is not one of those who make Jesus so unremarkable that one wonders why anyone ever noticed him. He was surprising, challenging, unique. The divisions among Jews which resulted from his ministry are sensitively and believably analysed.

He goes on to argue that the use of the Jewish scriptures by Jesus’ followers is not out of place in an age which produced the Book of Jubilees, the allegories of Philo, and the growth of midrash. The first Christians, like other Jews, ‘read their sacred texts in terms of their own situation and their own faith and expectations, without being concerned with the question what the biblical authors might have meant by their words in their own day’ (126). Unfortunately, we can no longer read the OT like that.

The whole book raises important questions in a clear-sighted and arresting way. If we do not like Grollenberg’s conclusions, it is up to us to show where his analysis of the early Christian movement is at fault—or, if he is right, to explain how the NT outlook on the people of God can be held acceptably in the light of literary criticism and of the fear of anti-Jewish prejudice.

So where will it go on my shelves? In the section on the NT’s use of the OT, because it is there that his problems begin and his most significant argument is focused.

The origins of Israel in Canaan: an examination of recent theories

Prosperity theology and the faith movement

Writing the history of ancient Israel: a review article

by David G. Deboys
VIEW ALL VIEW ALL

Studies in the Religious Tradition of the Old Testament

The Sermon on the Mount: Utopia or Program for Action?

Hostility to Wealth in the Synoptic Gospels

Reviewed by Robert Willoughby
New Testament
VIEW ALL VIEW ALL