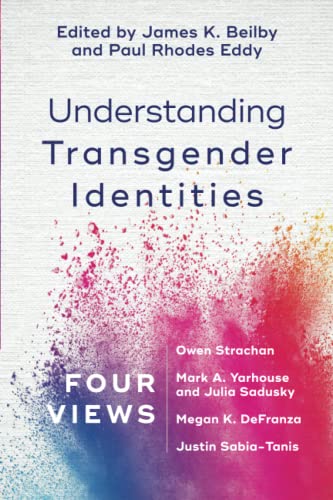 The “Four Views” series from Baker Academic presents different perspectives on a range of subjects of contemporary Christian debate. The latest book in this series is about how to understand the identity of transgender people—that is, those whose gender identity as man or woman or other does not match the biological sex into which they were born.

The book begins with an introduction by the editors in which they trace the development of the concept of transgender identities, give an overview of contemporary issues and controversies on the subject, and outline the range of different Christian perspectives on the matter.

The introduction is then followed by four chapters which set out four different understandings of transgender identity by five authors. Each of these chapters is followed by three responses by the other four authors. At the end of the book there is a glossary, a list of the contributors to the book, and Scripture and subject indexes.

The first chapter, “Transition or Transformation? A Moral-Theological Exploration of Christianity and Gender Dysphoria,” is by Owen Strachan, associate professor of Christian theology at Midwestern Baptist Theological Seminary. For Strachan,

the Scriptures speak with conviction and compassion on the contested matters before us. My view, the historic view of the millennia-old Christian Church, is that the sexes are binary—man and woman. Further, while we all undergo suffering as a result of Adam’s fall, men and women who experience gender dysphoria should not undergo bodily changes but instead, with vivified awareness of the witness of Scripture and a moral imagination ignited for God, should pursue something greater and more effectual than any transition: transformation. (pp. 57–58, emphasis original)

By “transformation” Strachan means people receiving strength from God through the Spirit to accept their biological sex is a gift of God, to repent of the desire to assume an alternative identity, and to live as the men and women God created them to be.

The second chapter, “The Complexities of Gender Identity: Towards a More Nuanced Approach to the Transgender Experience,” is by Mark A. Yarhouse, professor of psychology at Wheaton College, and Julia Sadusky, a postdoctoral fellow at ED Care in Denver, Colorado. Yarhouse and Sadusky consider three “frameworks” or “lenses” for “understanding the topic of gender identity and the people who are navigating gender identity concerns” (p. 102).

The first framework is the “integrity framework” (p. 102). This holds, on the basis of Genesis 1–2, that God has created human being as male and female, that what determines their maleness or femaleness is the sex of their body, and that Scripture prohibits behavior that goes against this sexual identity. The second framework is the “disability framework” (p. 104). This holds that an incongruence between someone’s sense of their own identity and their biological sex is a result of the Fall, but is not to be regarded as a moral issue because (like disability) it is something that has happened to someone rather than something they have chosen. The third framework is the “diversity lens” (p. 105). This holds that the different understandings of gender identity that exist today are something “to be embraced and celebrated” (p. 105).

Having set out these three frameworks or lenses, Yarhouse and Sadusky then sketch out how each of them provides a different way of approaching the issue of transitioning into a new gender identity and impacts ministry to transgender people. At the end of the chapter they offer “the possibility for churches to consider what it would look like to draw from each of the three lenses in a way that maintains doctrinal positions and offers the gift of hospitality to all persons” (p. 128). They emphasize that “there is no single experience of navigating gender identity concerns that captures all the experiences of people who identify as transgender” (p. 129) and “recommend a willingness to be ‘caught up’ on the life of the person in front of you, rather than making blanket statements that enact judgement on behavior before understanding the context of a person’s life” (pp. 129–30).

The third chapter, “Good News for Gender Minorities,” is by Megan K. DeFranza, a research assistant at the Center for Mind and Culture and a visiting researcher at Boston University School of Theology. DeFranza argues that although the human race is generally dimorphic in that most people are either male or female both in their biology and in their sense of self, there are exceptions—namely, those who are biologically intersex or who do not identify with their biological sex. She further contends that the way that the New Testament includes eunuchs within the people of God (in line with Isa 56:3–5) points to the truth that the biblical story “is not circular but linear. It does not end where it started” (p. 174). As she sees it, “Adam and Eve are but the beginning of the story” rather than “some masculine or feminine ideal against which we all fall short” (p. 174). Post Eden there can be a variety of different ways of being human (such as being a eunuch) and what matters is our “conformity to Christ” (p. 175) rather than some particular masculine or feminine identity.

The lesson from all this, DeFranza contends, is that “Christians must stop demonizing transgender people as rebellious against God and nature on account of the fact that their experience of themselves is different from the majority” (pp. 177–78).

Male and female define two categories of humans, but they are not meant to be exclusive boxes that limit our individual expression. Like night and day, land and sea, plant and animal, they are descriptors but have liminal spaces between them where aspects of both elements are combined. How people express these spaces, these differences, is part of the beauty that makes up the human family, part of the goodness of God’s creation. (pp. 196–97)

Like DeFranza, Tanis sees the inclusion of eunuchs into God’s people as a sign “of God’s recognition and acceptance of an array of genders” (p. 205). Tanis explains, “Being transgender or intersex is experienced by many of us as a gift from God, an opportunity to see life from more than one perspective, to understand the world through uncommon, but holy lenses” (p. 204). As Tanis sees it,

Christians with gender dysphoria have the right to pursue treatment that offers the greatest possibility for their health and well-being. For many transgender people, but certainly not all, this entails gender transition, which can take a variety of forms, including hormone replacement therapy (HRT) and gender confirmation surgeries. Moreover, I believe that our calling to compassion requires us to advocate for people’s right to make this decision and work to ensure equitable access to it. (pp. 204–5)

Understanding Transgender Identities is a useful introduction to the current debate about transgender identity in both society and the Church. The introduction and the subsequent chapters clearly illustrate the range of different positions that are taken concerning the nature of transgender identities and how best to provide pastoral care for transgender people. The responses by Strachan helpfully highlight the weaknesses of the more liberal approaches represented by the other four authors.

However, there are also a number of weaknesses in the book. First, there is a lack of attention to the vigorous social and political debate that is currently taking place about matters such as the use of pronouns for transgender people, what should be taught about transgender issues in schools, and whether male to female transsexuals should be able to take part in women’s sport or have access to women-only facilities.

Second, there is a lack of engagement with the increasing body of evidence that suggests that gender transition will not necessarily be effective in resolving the mental anguish experienced by transgender people. The issue of the effectiveness of treatments for gender dysphoria is discussed on pp. 116–20, 137 and 213–14. But in all three places the evidence suggesting that gender transition will not necessarily produce the relief from mental distress that patients are looking for is not taken sufficiently seriously. In fact, the evidence of those who have de-transitioned is dismissed rather than properly discussed.

Third, the chapter by Strachan suggests that an orthodox Christian response to the transgender issue is linked to a conservative complementarian view of male and female gender roles. Strachan does acknowledge that evangelical egalitarians do generally take a traditional view of human sexual identity (see n. 55 on p. 80), but the chapter as a whole suggests a tight link between a traditional view of sexual identity and a complementarian view of gender roles in a way that evangelical egalitarians may find problematic.

Fourth (and most seriously), the book as a whole—including the material by Strachan—fails to clearly identify these key theological issues in the debate about transgender identity: