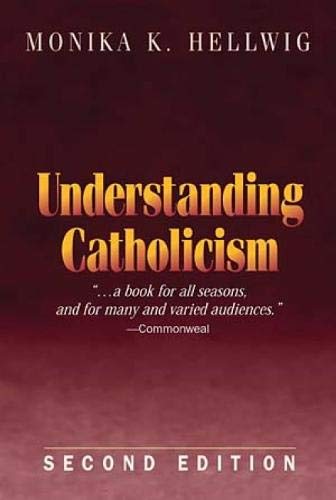 Monika Hellwig, Assistant Professor of Theology at Georgetown University, is a popular Catholic writer with the goal of making official church teaching intelligible and palatable to the lay Catholic. She writes here for Catholics who are bothered ‘when they have questions about their faith, or when they begin to realize that the old explanations, which were good enough before, no longer seem to offer coherent meaning’ (p. 1). The epistemological tone of the book is indicated in the introduction: ‘There are really no statements or formulations in which God has given us a final answer or explanation in words’ (p. 4). Even the most solemn statement of a council or Pope is more of a starting-point than a final answer.

In the first main division Hellwig deals with revelation, creation, and sin. The language of theology is considered to be at best only analogical and suggestive of far higher realities. The biblical creation stories, ‘couched in the language of myth’, leave the question of evolution wide open. The ‘sin of Adam’ is ‘the general state of sin in the world by which the whole human situation is set awry’ (p. 47).

The book’s second division treats Christology. Jesus plays the role of a second Adam by reversing the damage done through sin, incorporating us into himself, turning sin and death into true life and immortality, and restoring God’s image and likeness in the human community. Such a view of Christ’s work is held to be far superior to explanations of the atonement which stress Christ’s satisfaction for sin or (considered to be even worse) his substitutionary death for humankind. As to the question of why the death of Jesus is redemptive, there can never be one correct and universally valid response ‘because we are here so definitely in the realm in which explanations must be by analogies, images, stories, and the hinting language of poetry and myth’ (p. 82). The resurrection of Jesus ‘does not offer proof of anything because it is not a publicly evident event testified by neutral observers’ (p. 103). To ask whether Christ’s tomb was really found empty is to ‘trivialize’ the mystery of the resurrection and to turn attention toward the satisfying of idle curiosity.

Part three is a fairly traditional statement and defence of Catholic teaching on the church, the sacraments, and the Christian life. Hellwig upholds church authority even though a clear rationale for that authority is not given. Yet in the every-day struggles of Catholics to give intelligent obedience to their church, particularly in areas of morality, one’s conscience is said to be the final arbiter in the process of deciding right or wrong in a particular situation! Prayers for the dead and auricular confession are defended, and personal conversion is seen as a ‘painful and laborious process’ (p. 121).

The final division deals with eschatology and trinity. Salvation of the individual means ‘liberation from oppressive fears, harmful desires (and), self-destructive tendencies’ (p. 173), while salvation of the world refers to the inevitable transformation of societal structures, laws, and distribution of goods. The book closes with a brief but insightful discussion of the Trinity.

Understanding Catholicism will leave most lay Catholic readers with a fair sense of peace about their church. Because of the author’s pastoral purpose the serious nature of the disagreements among present-day Catholic theologians and churchmen is not brought out. Hellwig attempts to steer a middle course between traditional and contemporary Catholic thought, although she leans to the left on matters of dogmatics and to the right on ecclesiastical matters.

Because of its over-all balance and helpful subject index (7 pages), the work may be used with profit by evangelical readers in their study of Catholicism and dialogue with Catholics. Although evangelicals will be saddened by the unbiblical theology of the book as a whole, they will appreciate a number of Hellwig’s broader Christian insights, such as her stress on the unity and purpose of all life in God and her strong sense of community in the developing and practising of Christian faith. In addition, her irenic and skilful manner of protraying the theological developments and controversies of the patristic period, while necessarily over-simplified, serves as a model for readers who desire to communicate historical theology in a way that is both interesting and edifying.