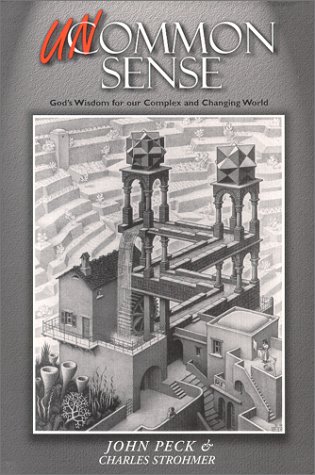 Uncommon Sense—God’s Wisdom for our Complex and Changing World

Uncommon Sense—God’s Wisdom for our Complex and Changing World is based on the clear Biblical understanding that all of life comes under God’s purview, that everything must be submitted to him and the measure of his word, and that therefore there is nothing that we might do—whether paint a picture or run a business or govern a country or study geography or boil an egg—that should not be radically affected by God’s priorities and wisdom.

This ought to go without saying. However, the 20th Century British Church, evangelical and non, was hobbled in its discipleship, in its evangelism and in its efforts at social transformation by theologies and praxis that ran counter to this holistic view. The university world was no exception. As one former UCCF executive put it, ‘I could practically guarantee that I could go into any CU in Britain and not find a single person who could give me a theology of the subject they were studying to degree level’.

As such Strohmer and Peck’s book is timely. They make a strong case for an integrated view of the whole Biblical life and show how all decisions, policies and actions spring from some view of right and wrong, of meaning, of value, and therefore that everything carries values which are either consistent with Biblical revelation or not. Their concern, however, is not simply with right thinking but with Godly living. As such their goal is to help the development of Biblical wisdom. And Biblical wisdom manifests itself in action, not merely in mental assent, just as truth in the OT is not just something you know but something you do.

So Strohmer and Peck develop and illustrate a method for ‘wisdom living’ in the 21st century. Here they call us back to the Bible but not to locate proof-texts or superficially attractive parallels with contemporary contexts, but rather to a grasp of the fundamental Biblical categories and their application to contemporary situations. So for example, faced by questions to do with corporate business, their approach is not to look for a Biblical equivalent—there really isn’t one—but to ask questions about what is involved in corporate business—work, relationship, wealth generation and distribution, etc—all of which are categories addressed by the Bible. This, in turn, is underpinned by their understanding of the centrality of Christ as the Logos, the ultimate authority and primary lens through which to view human activity. So business ‘by the Book’ must also be ‘Gospel-shaped’. This means that is partly a rescue, ‘a saving operation’. Profit is a key measure but not its only goal.

The new contribution, which is anticipated by Calvin’s sphere theology and De Kuyper, is a tool they call ‘Modal Theory’. They break down human living into 15 categories—religious, ethical, juridical, economic, societal, linguistic, aesthetic, historical, rational, psychical, biological, physical, kinetic, spatial, number. All fifteen are in turn submitted to Christ. Strohmer and Peck encourage us to use these categories to help us generate the right questions about a policy, a book, an event, a habit as well as to avoid the reductionism that makes ‘religion’ and ‘morals’ the only criteria for analysis. This is both common-sense and scriptural. For example, the Bible gives not one reason, but five why the children of Israel did not succeed in clearing all the former inhabitants out of the land. It was not just a failure of faith (religion) but also related to technology, ecology, education and social relations. Similarly, part of the solution in an office frazzled by fractiousness among the employees might not be to call simply for a greater manifestation of the fruits of the Spirit but to recognise that the desks were too close and people couldn’t help bumping into each other. So in this example we might seek to discern God’s principles in the rational, the biological, the spatial and the aesthetic categories—all areas that God has created—and which might be explored to create design that is likely to maximise human harmony.

There is no question that Strohmer and Peck are on to something important here and no doubt that there are many helpful insights. Still, the book is somewhat repetitious and it feels as if it could have been a hundred pages shorter. More importantly, I was not convinced that they had mastered their own method. They encourage the reader to use the helpful index to dip and dive around the book and explore issues we’re interested in. Good idea, but when you do this you don’t usually come up with anything very satisfying and often with the confession that this isn’t their area of expertise and that someone else could take it further. Rightly, they want to teach us to think but I came away wanting them to work through some more examples in depth to give me a clearer sense of how.

All that said, this is a helpful book in an area where very little has been done for a long time. Strohmer and Peck are charting new territory and it would be wrong to nitpick at these pioneer cartographers for not illuminating every inch of the path. They have held up quite a bright lamp. And I for one am grateful for it.