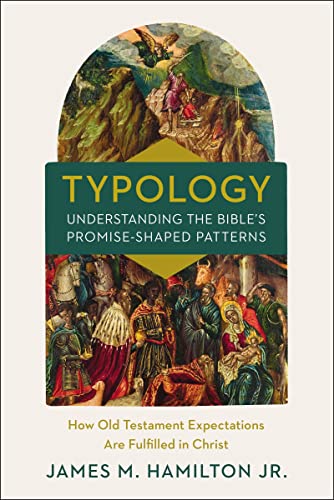 Typology–Understanding the Bible’s Promise-Shaped Patterns: How Old Testament Expectations are Fulfilled in Christ

In recent decades, with the rise of assessments such as the Enneagram or the Myers-Briggs Type Indicator, the word “typology” has been a bit of a buzzword pertaining to methods of measuring or categorizing personality traits. It is not this form of typology that James Hamilton, professor of biblical theology at the Southern Baptist Theological Seminary and senior pastor at Kentwood Baptist Church in Louisville, has in mind in this book. Hamilton suggests the Greek word τύπος, from which the English ideas of “type” and “typology” are derived, indicates an “impression” of consciousness that informs how a person interprets further information. Rather than the form of typology lauded in popular culture, Hamilton defines typology in biblical studies as “God-ordained, author-intended historical correspondence and escalation in significance between people, events, and institutions across the Bible’s redemptive-historical story” (p. 26). The study of typology “amounts to active reflection on one passage in light of others” (p. 8). It is the process of reading Scripture in the broader context of the biblical canon to see how certain words, phrases, themes, ideas, or symbols find their fulfillment as the writings progressively reveal God’s message to the world.

Hamilton explains that there are two types of biblical typology: “micro-level” and “macro-level.” “Micro-level” biblical typology is “the quotation of lines, the reuse of key terms, the repetitions in sequences of events, and the similarities in covenantal and salvation-historical import we find when we focus in on particular texts” and “macro-level” is “wide-angle literary structures” (p. 3). Micro and macro-level indicators work together to communicate the meaning an author intends to convey through their writing (p. 332). Micro-level typology encompasses most of the book, being considered in detail throughout chapters 1–10, while macro-level typology takes a minor role examined only in the final chapter (ch. 11). Hamilton looks at micro-level typology pertaining to people (Adam, priests, prophets, kings, and “the Righteous Sufferer”), events (creation and exodus), and institutions (the “Leviticult” and marriage), arguing that God’s promises recorded in Scripture informed how the biblical authors wrote and, thus, why the biblical authors intended to communicate these types in their writings. He furthers this argument in the final chapter by demonstrating how parallelism and, specifically, chiasms, serve the same function at the macro-level.

A key issue in the study of typology addressed by Hamilton is the concept of authorial intent. An important question that underlies the study of typology is, did the biblical authors believe they were writing to their immediate audience or contributing toward a larger corpus as they were carried along by the Holy Spirit? To address this question, Hamilton writes, “The most important criterion for determining what a text means is determining the intent of its human author” (p. 18). Hamilton further argues that, because the Bible is inspired by the Holy Spirit, the intent of the human authors of Scripture are in alignment with the intent of the Divine Author. Since God inspired both the earlier and later books of Scripture he serves as the unifier of thought and idea across Scripture as written by the human authors and, thus, the dichotomous relationship between the original audience and later audiences of Scripture can coexist under the banner of divine authorial intent (p. 28). Hamilton believes that Genesis 3:15 is the key to understanding both typology and authorial intent because it anticipates the types that come later in Scripture to which the human authors of later biblical books contribute under the guidance of God’s Spirit. To best determine what the human author intended, Hamilton states that the historical-grammatical method should be the standard in the study of typology, which he employs throughout Typology.

The key phrase for Hamilton is “promise-shaped typology,” which he says “attempts to capture what happens when God makes a promise that results in those who know him interpreting the world in the terms and categories either communicated in the promise or assumed by it” (p. 4). These promises, revealed in Scripture, have “been pressed into the consciousness of those who believe [them], and that impress results in reality being interpreted in light of God’s word” (p. 15–16). Hamilton believes that by better understanding the typological promises made in Scripture people may better come to understand reality as God intends, which should inform a person’s belief and practice.

Typology is a helpful work in the field of biblical theology that is scholarly, accessible, and bridges the gap between intermediate and advanced students of Scripture. Hamilton helps the concept of biblical typology come to life in a way that is spiritually encouraging and academically compelling. This book is well-suited for biblical-theological scholars interested in biblical theology and typology, pastors or other ministry workers responsible for regular preaching and/or teaching responsibilities, or serious students of Scripture interested in deeper study of the Bible’s weave of interconnectedness. This would make for an ideal textbook in a biblical theology or survey course at the Bible college or seminary level and an excellent resource to keep on the bookshelf of any student or teacher of the Bible. Typology would make a worthy addition to the resource list of anyone desiring to see how many big, confusing, or seemingly unrelated concepts within the Bible interconnect to reveal a grandiose masterpiece woven by God through inspired human authors to impact students of his Word with a clearer and sweeter picture of reality that will deeply impact their knowledge of the things of God.