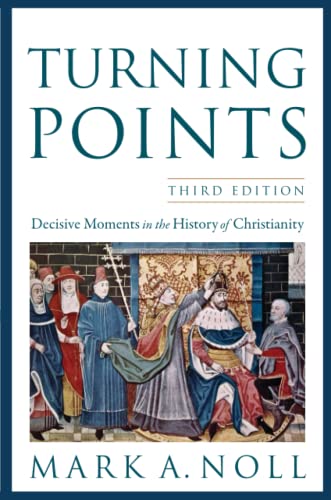 Turning Points: Decisive Moments in the History of Christianity

Mark Noll’s survey of key movements and moments in the two millennia of Christianity is well written and judiciously selected. The book is designed for the relative newcomer to church history and would be an interesting read for the oft cited ‘educated person in the pew’, that ecclesiastical equivalent to the man on the Clapham omnibus. The text is broken up with boxed quotations of significant texts and a prayer is printed at the end of each chapter so as to attempt a type of interactive mood of drawing the reader into the narrative rather than one of academic detachment. In all this the production is handled very well.

Any such review runs the risk of criticism from the denominations, and those who claim to be ‘not a denomination’, of bias. Noll, to my evangelical Anglican mind, has done a good job and writes with appreciation of all traditions, without descending into that sugary mode of undifferentiated praise for everything bearing the label ‘Christian’. Noll is a Protestant and knows why, yet is self-critical of his own tradition as well as finding cause to admire and acknowledge the place, for example of the monastic movement and the Second Vatican Council.

What is the route of his bus ride through history? It takes us from the primitive church of Acts, to Nicea and Chalcedon thence to the monastic movement. The next stop is Charlemagne and papal Christendom and the split between East and West in 1054, when the Eastern church rejected papal claims to jurisdiction. The Reformation, English Act of Supremacy, and counter-Reformation provide the next stage of the journey before the Wesleys. We hit the traffic lights of the Enlightenment with the French Revolution and liberalism of all kinds, before the Edinburgh Missionary Conference of 1911 and a final chapter of twentieth century points such as communist oppression in the East, Vatican II, Pentecostalism, the new place of women. One does have to admire the sweep of the book as an introduction to church history.

The book is, however, a survey and has not the time for intricate discussion of points and that sense should not be relied on as a ‘textbook’ to replace treatments of particular historical topics. For example I would commend Stuart Hall’s Doctrine and Practice in the Early Church as a necessary complement to the patristic material on Ignatius and Irenaeus. I am not sure the book quite captures the feel of the Anglican settlement, whose self-understanding was not a break from the Catholic church (p. 178), but rather a reformed Catholicism in England, hence the very careful retention of bishops duly consecrated, but a survey cannot encapsulate every such nuance.

‘What counts as Christianity?’ is a nice question. While Chalcedon established the Christological definition accepted very widely, it also caused the exclusion of the Coptic Church and Oriental Orthodox, whom most today would accept as disciples who have suffered immensely for their faith. This is not a ground on which to criticise the selection of movements in such a book as this, but a plea for such worthy ‘losers’ by church historians.

Altogether this is a fair and interesting historical survey, attempting to do right by all brands of Christians, the one ‘value judgement’ I spotted being about Anglicans as ‘wobbling (typically)’ on page 17. I was pleased to see the book dedicated to Transylvanian Baptists and their Oradea Seminary in Romania, a worthy and dynamic college.