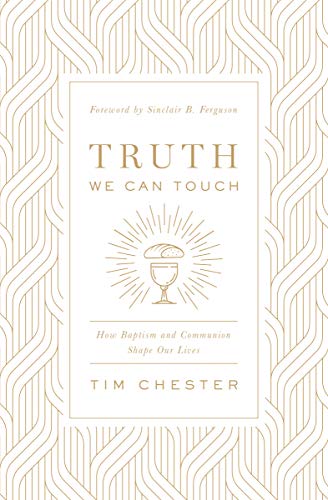 Truth We Can Touch: How Baptism and Communion Shape Our Lives

Chester is a prolific author and has produced another title that is at once useful to the church, accessible to a wide-ranging audience, and academically reliable. In Truth We Can Touch, he is responding to dissonance between the common evangelical practice of Communion and baptism in the church and his growing sacramental instincts. He is pulled toward the sacraments because of the theological significance they played in the Reformation and their underlying importance as participatory actions (i.e., why we are called to “do” these things rather than merely “say” or “think” these things). As a result, he believes the sacraments are underappreciated as gifts of God to nurture the church’s faith (pp. 21–22). His goal is to help us learn how to approach them with greater appreciation, thereby using them for their intended purpose. As Sinclair Ferguson notes in the foreword, the author is not trying to simply gratify the desire to have the “right” theological position on these topics but to receive from the sacraments their intended blessings (p. 12).

The first four chapters seek to explain how the sacraments embody the gospel and the last two demonstrate how these rituals shape the Christian life and community. Chapter 1 focuses mainly on baptism and explains it as an enacted or embodied promise. That is, the promise which baptism embodies is the promise that saves. Using helpful analogies (e.g., wedding rings, a signature on a contract, etc.), Chester is careful to deny baptismal regeneration while still underscoring the significance of the embodied act. Baptism is not salvific on its own but, when received by faith, has a real effect. The reality of baptism is a visible sign of the gospel and a spiritual tether to the objective nature of salvation.

The second chapter focuses on the meal as the embodiment of grace (i.e., a means of grace). Chester traces meals in Scripture to show the significance of the Lord’s Supper as the summary meal of Scripture. This embodied meal is a reminder of God’s provision (i.e., he feeds us—contra the gods of the ancient world which require worshippers to feed them). Further, the meal is a moment of distinct participation in the grace of God.

Chapter 4 provides compelling exegetical and pastoral evidence for the sacraments as reminders in permanent, physical form. Having subtly deemphasized the memorial view, Chester does a marvelous job explaining the reason Christians need embodied reminders. As he summarizes, “The primary way we are to encourage, counsel, and exhort one another is through reminding one another of the gospel” (p. 109). The sacraments both call people back to the gospel and retell the story that shapes Christian identity. The story of the gospel unifies the church; despite many unique experiences and varying conversion stories, all believers enter the faith through the same baptism.

Building from the idea that stories shape us, chapter 5 explains baptism as a paradigm for the Christian life. Living the baptized life is a skill formed through community, imitation, and ritual. In Chester’s persuasive explanation of the baptized life, there is room for further reflection on the role that ritual plays in shaping our affections and helping believers know God. While James K. A. Smith is mentioned helpfully (although briefly), I would have liked to see interaction with other scholars in this area, such as Dru Johnson and Peter Leithart.

Chapter 6 expands the focus to the larger Christian community reminding that baptism and the Lord’s Supper are pathways of reconciliation and discipline. In the conclusion, Chester skillfully argues from the example of Luther that the medieval views of transubstantiation are, interestingly, too clever and modern. Similarly, our contemporary world struggles with the miraculous and transcendent. Rather than always trying to dissect the miracle, we should see the sacraments as an opportunity to enjoy God communing with his people.

If this work suffers from anything, it is the understandable difficulty the author has in determining a specific audience while maintaining broad appeal and applicability. Accompany this challenge with attempted brevity and one might find a few shortcomings. Chester helpfully wants to focus on the usefulness of the ordinances in Christian spirituality. Whether for broader appeal or to avoid distracting controversies, he intentionally neglects the topic of infant baptism. For all the talk of “means of grace” there is no discussion of the mode of either baptism or the Lord’s Supper.

The tone can also be confusing. The illustrations and applications are aimed at a general audience, yet the reader is expected to have far-ranging understanding of the issues at hand. Other times the audience is given simplistic explanations of well-known topics (e.g., transubstantiation). In some ways, the book assumes the reader understands the basics of Reformed thought concerning the sacraments and has clear convictions about their underlying theology, meaning, and mode.

Some scholarly debate is used to make a practical point at the expense of the original argument. For example, Chester uses Joachim Jeremias’s complicated study of the Eucharist to make the point that God is the one remembering the sacrifice of Christ during the Supper (p. 122). Not only is Jeremias’s original work dense and contested, it relies on a methodology that does not cohere with Chester’s approach. More problematically, Chester initially affirms Jeremias’s thesis, but then contradicts it in the next paragraph when he explains the act of remembrance is done by the participants of the Lord’s Supper. To responsibly implement Jeremias’s findings, the words of institution must either refer to the participant or God doing the remembering, not both. The average reader would not be expected to pick up on such a detail, but it could undermine confidence in other sources throughout.

The organization of the book is also not particularly straightforward. The thematic arrangement allows the author to quickly jump back and forth between baptism and the Lord’s Supper, sometimes irregularly. The important discussion of “spiritual presence” (maybe the central theological retrieval consistently argued for by the author) is discussed separately in two chapters rather than as a single, sustained treatment.

Chester has accomplished a difficult task by writing a book that traverses important and complicated topics while not turning them into esoteric theological exercises. He has achieved what he set out to do, to emphasize the role of the sacraments in the Christian life to spiritually nourish faith. The receptive reader will consider the gospel more deeply because of its embodiment in the ordinances and will be challenged to drink more deeply of God’s grace the next time they are observed.