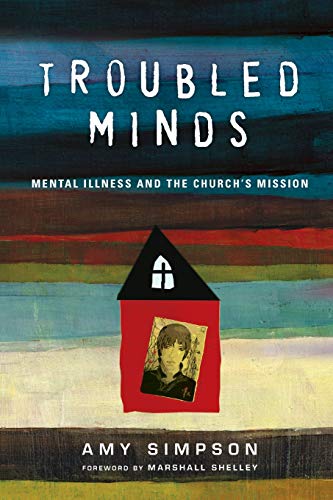 This book is the 2014 Christianity Today Book Award Winner (Her.meneutics) and also winner of a 2013 Leadership Journal Book Award (“Our Very Short List” in “The Leader’s Outer Life” category). The author serves on the editorial staff of Leadership Journal. In declaring her writing purpose, Amy Simpson speaks to her readers’ expectations. “This is not a clinical work or an academic tome. It’s not a gripe session or a tirade against the Church. It’s a book that the church needs because of both its practicality and its stories” (p. 19).

Regarding the book’s practicality, the author’s rich collection of facts, particularly those based on her personal church survey delivers. Select survey facts include: “mental disorders are the number one cause of disability in America” (p. 33), and “about one in four adults—a little more than twenty-five percent of Americans ages eighteen and older—suffers from a diagnosable mental disorder in a given year” (p. 33). That means, “If your church is typical of the US population, on any given Sunday one in four adults and one in five children sitting around you are suffering from mental illness” (p. 35). For pastors, this means that “Nearly half (44.5 percent) of church leaders are approached two to five times per year for help in dealing with mental illness; 32.8 percent are approached more frequently, from six to more than twelve times per year” (p. 99). The cold and hard facts tell us that, “Nearly 5 percent (4.8) of church leaders have asked someone with mental illness to leave the church temporarily; 3.2 percent have asked the person to leave the church permanently; 3.4 percent have sought a restraining order against the person” (p. 132). Perhaps not so surprising, “antipsychotics are now the top-selling class of drugs in the United States” (p. 34).

What about mental illness among the homeless and incarcerated? “Most reliable sources report that about 40 percent of homeless people have some kind of mental health problem, and 20 to 25 percent of homeless people have serious mental illness” (p. 92). Regarding those incarcerated, “statistics vary, but the Department of Justice itself estimates that in the United States, more than half of inmates have symptoms of serious mental illness—ranging from 45 percent of inmates in federal prisons to 56 percent in state prisons and 64 percent in local jails” (p. 92). These statistics are striking, giving us a sobering perspective on the outcasts of our society.

The author’s use of stories complements her statistical arguments. Simpson’s personal story of a parent with mental illness, the stories she has collected from others, and even the stories she uses to illustrate the various forms of mental illness will offer a different but powerful form of impact on readers. These flesh-and-blood accounts remind us that people with mental illness need help, but not always in the way most of us expect. The first and most basic help that they need is to be understood. This might seem like an impossible task for not only might they not understand themselves, even therapists may not understand their illness. In fact, many people with mental illness go undiagnosed. But that is not the kind of understanding most needed. People with mental illness want to be accepted as human beings, and to have others be willing to walk with them through the dark valleys of their lives. What is more, their families and friends will experience a form of secondary suffering. If pastors and congregations pull away from these poor souls at a time in life when they need their church most, they may leave their local church to look elsewhere for help.

Troubled Minds complements two other recent works addressing the Christian response to mental illness. R. H. Albers, et. al. (eds.), Ministry with Persons with Mental Illness and Their Families (Minneapolis: Fortress, 2012) offers descriptions of the primary forms of mental illness including a general discussion of medications and other forms of treatment, and serves as a primer on ministering to those with mental illness. John Swinton, Dementia: Living in the Memories of God (London: SCM, 2012), focuses exclusively on Dementia with a view to presenting a truly Christian understanding of the illness and developing authentically Christian modes of dementia care. If this reviewer were to select just one of the three books for readers who would like a first book on the Christian and mental illness, however, I would go with Simpson’s Troubled Minds.