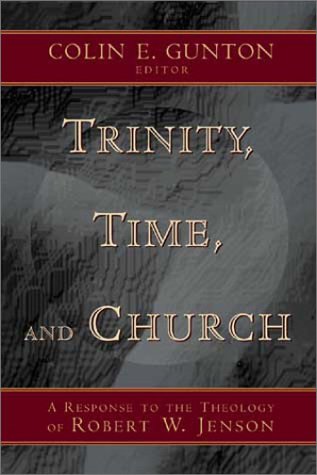 Trinity, Time, and Church: A Response to the Theology of Robert W. Jenson

Robert W. Jenson is one of the foremost American theologians living today. Having written extensively on a wide variety of topics including the doctrine of the Trinity; eternity and time; the theology of culture; politics; the sacraments and the list could almost hint at exhaustiveness; he has established himself in the theological discourse of both Church and academy. With the recent publication of his two-volume Systematic Theology he has reached that stage in his career where he has provided the material for fruitful exchanges with fellow theologians. This collection of essays is an example of just how fruitful such an exchange can be.

The prestige of the contributors is impressive and Colin Gunton has managed to draw together theologians from diverse church persuasions as well as a representative of Jewish theology. The aim of each paper is to present, assess and critically engage various aspects of Jenson’s contribution to theology which is by no means easy to assess at such an early time. However, not all papers do that: some contributions (such as Seitz’s, Pannenberg’s and Wilken’s to some extent) are essays standing on their own, advancing their own proposals quite independently of the work of Jenson. This is not to take anything from the otherwise outstanding interest that they present for the reader. The rest of the essays, nonetheless, stick to the editorial instructions and creatively and critically engage with the work of Jenson.

The twenty-one essays gathered in this volume are enough to make it extremely usable as a critical introduction or a reference source to Jenson’s work, although some familiarity with it is presupposed but not critically counted on. The scope of each chapter, however, plainly shows that this is no mere introduction, as each writer develops his own argument over against, in dialogue with, or starting from Jenson, or simply—as one writer put it—in Jensonian mode.

The volume starts off with a personal memoir by Carl Braaten, Jenson’s closest associate. Then follows James Buckley’s characterisation of Jenson’s theology along three lines: the drama of God, a revisionary metaphysics and a liturgical test. Seitz’s piece is an investigation of the attribution to Jesus of the name of God and of the relationship between the two names. Jewish theologian David Novak, in an essay emerging out of both academic interaction and friendly exchange with Jenson, argues for a kind of philosophical theology on the basis of the intelligibility of the world (granted at creation) over against cabalistic theologies. Wolfhart Pannenberg’s part in this collection is all about timing. He offers a slightly more conservative understanding of the relationship between God and time in the sense of emphasising that God is not subject to the march of time. This aspect is indeed illustrative of a critical tendency of many of the present contributors to warn Jenson against collapsing God into history, as well as Christ into Church.

Douglas Knight then criticises Jenson’s concept of time by reworking the relationship between time and spatiality. Gunton takes up a similar line of inquiry whilst challenging Jenson’s language of ‘withinness.’ He argues that creation does not take place within God simpliciter, but within the person of the Son. Gabriel Fackre’s essay marks the transition toward matters more this-worldly with his interpretation of Jenson as reading with a relentless consistency the classical loci through the lens of the finitum capax infiniti.

In ‘Once again, Christ and Culture’, Christoph Schwoebel compares the respective approaches to the question of Christ and culture of H. Richard Niebuhr and Robert Jenson and wonders whether in the case of Jenson it is more a case of the relationship between Church and culture. Whereas in Niebuhr the Church is relativised through emphasis on the Lordship of Christ, in Jenson the Church becomes an extension of the incarnation. Gerhard Forde’s essay touches on the three phases of Jenson’s soteriology: the encounter with Barth, the dialogue with the Reformation and the resurrection. All these phases betray a narrative quality of Jenson’s theology. However, in Forde’s opinion, this becomes problematic when aspects of the narrative are left into oblivion. Tuomo Mannermaa defends the Lutheranism of Jenson’s doctrine of the Trinity while pointing out the link between the doctrine of justification and a trinitarian ontology.

Jeremy Ive rehearses the same criticism of Jenson for running the risk of collapsing God into history and divinising history in turn. Robert Wilken’s is a brilliant piece of Augustinian exegesis in ‘Jensonian mode’ investigating the proper place of the Holy Spirit and arguing that there is no such thing as reading the Scripture without the aid of tradition.

Then there follows an article by a Roman Catholic which at points seems more Evangelical than Jenson, the Lutheran, by pointing out the danger of Jenson’s putting the church alongside the three persons of God. A.N. Williams argues that Jenson’s theology has gradually drifted towards neo-Thomism in the three periods of his publishing career. However, such an interpretation is not entirely unproblematic, as David Yeago argues. Rather, Jenson’s whole ecclesiology can be seen as taking up significant themes in the ecclesiology of the reformers that have been pushed to the side and widely forgotten.

Richard John Neuhaus’ essay brings the volume back to the question of culture. He compares the work of Jenson with that of Hauerwas, Milbank, Pannenberg and Newman with respect to the public reality of the church. Stanley Hauewas carries this engagement forward in person by addressing some pressing yet idiosyncratic questions to Jenson about his hesitation to commit to non-violence. G. Meilaender sums up this section by arguing that there is a consistently articulated theological vision of politics in Jenson.

Closing up the collection are two articles, the first of which is on the nature of the sacraments in the theology of Jenson. In this informed piece, G. Wainwright does indeed present, asses and critically engage with this aspect of Jenson’s thought. The last article is Carl Braaten’s argument that there is a close connection between eschatology and mission and that this can be shown in respect to the task of theology; the identity of God, the purpose of the church and the meaning of eschatology.

To sum up: this is a most informed volume, comprising some excellent articles both on the theology of Jenson and standing on their own. It is indeed a pity that such a volume lacks a preface (although announced in the contents), which might have guided the reader through the intricate articles gathered here.