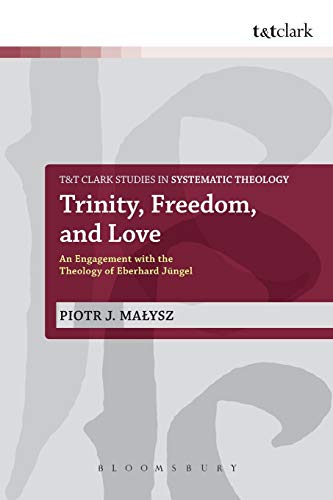 Trinity, Freedom and Love: An Engagement with the Theology of Eberhard Jüngel

Małysz’s study focuses particularly on the attribute of freedom, both divine and human. An initial chapter surveys the modern ideas of freedom that Jüngel opposes. Małysz devotes the second and third chapters, the analytic portion of the argument, to Jüngel’s accounts of divine freedom and human freedom. One of Małysz’s subordinate aims here is to disentangle Jüngel’s doctrine of God from his influential account of Barth’s and to document Jüngel’s extensive debt to Luther. The fourth and final chapter, the constructive portion of the argument, draws from Jüngel’s account of human freedom in order to resolve tensions in his account of divine freedom.

According to Jüngel, God, in his freedom to determine his own being, identifies himself with the man Jesus. He does so at the crucifixion, and not at the incarnation as we might expect. It is this free divine self-identification with the dead Jesus that both makes God triune and makes Jesus the Son of God. If, on Bruce McCormack’s reading of Barth, God becomes triune as the result of his eternal decree of election, for Jüngel God becomes triune as the result of his temporal identification with the crucified Jesus (p. 79). God’s identification with the crucified Jesus is also the primordial event of love: God surrendering himself entirely, to the point of death, to the object of his love, Jesus. For Jüngel, then, it is this exercise of the divine freedom that constitutes both God’s triunity as well as the loving intersubjectivity of his being: Trinity, Freedom and Love.

Jüngel’s account is not without its problems. To begin with, if Jesus is dead he can’t reciprocate God’s love, and without reciprocity God’s being cannot be said to be fully relational. Further, if God’s love is thus by definition unrequited, then God’s love for the world would seem to be indifferent to human reciprocity. Reciprocity is, however, prevalent in Jüngel’s account of human freedom. Humans are freed from self-absorption and self-tyranny when God “interrupts” their being in the event of the cross. The cross liberates humanity for love, for reciprocity, for a truly human self-determination for others and for an openness to interruption by others. Human freedom, on Jüngel’s account, is thus fully relational (p. 148) and explicitly Trinitarian in structure: originating in the Father, interrupted in the Son, and freed for its goal in the Spirit.

At this point Małysz proposes to emend Jüngel’s doctrine of divine freedom by aligning it more closely with his account of human freedom. If Jüngel is to speak of God as fully relational, Małysz argues that he cannot conceive of God as having merely “the form of a di-polar self-relation aimed at self-maintenance” (p. 173). Małysz proposes instead “an originary tri-polar openness . . . as the fount of creative possibility within God’s intersubjective being” (p. 207). Jüngel should have spoken of God’s being, according to Małysz, as having not merely its origin in the Father and its interruption in the Son, but also its goal in the Spirit. On this account, “There is in God a capacity for love, further, for genuine creaturely interruption, because from eternity to eternity, from origin to goal, God’s being [is] a triune self-transcendence” (pp. 172–73). This Trinitarian tweak to Jüngel’s theology suggests that God’s love of the dead Jesus, who is the interruption of the divine life, can creatively anticipate its goal in the Spirit-filled community of believers because God’s love also finds its goal in the Spirit within the divine life (p. 196). Once again, Jüngel’s account of human freedom suggests that there ought to have been more to his account of the divine freedom. Małysz shows us convincingly what this “more” would have to be.

Jüngel’s theology would not serve well in Sunday school. His stratospheric sophistication is beyond the reach of most mortals, and the bulk of his work remains encrypted in German. Małysz has thus done us outstanding service in bringing some of the essential features of Jüngel’s theology within our grasp, and in engaging Jüngel critically, charitably, and with remarkable insight. Małysz is also a fantastic writer. He translates Polish poetry in his spare time, and somehow he’s made this Harvard dissertation read like a novel at points: an absorbing quest for the key to unlock Jüngel.